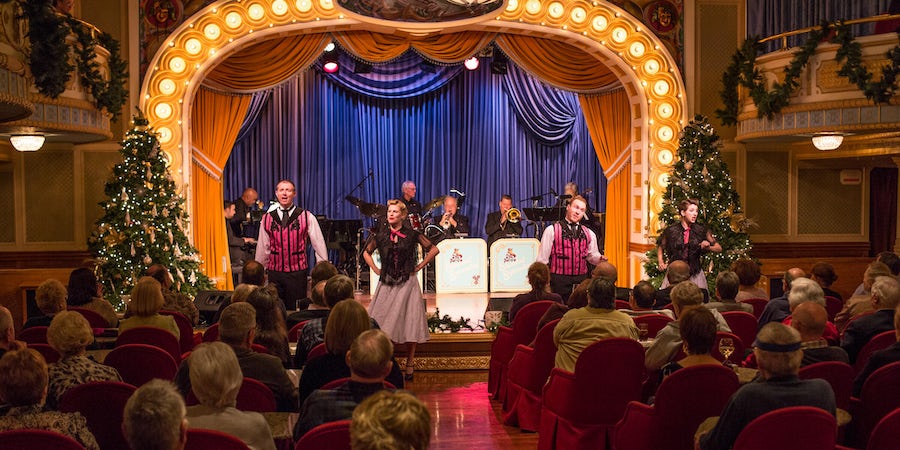 With the weather turning colder in the Northern Hemisphere, there are sure signs the holiday season is on its way. Leaves fall off trees, cinnamon becomes an approved topping in nearly every latte, and The Hallmark Channel rolls out its festive lineup of cinematic offerings to watch fireside.

For 2021, one Hallmark Channel Christmas production has a unique twist: part of it is set aboard American Queen Voyages' American Duchess on the Mississippi River.

Making its Hallmark Channel debut on November 18, 2021, "Every Time a Bell Rings" was filmed both onboard American Duchess and in the historic town of Natchez, Mississippi, with both decked out in full Christmas attire for the September filming.

Natchez is also an important location for American Queen Voyages: its Mississippi river cruise ships are regular visitors to the town, which was established in 1716 by French colonists and played a pivotal role in the development of the South. Today, visitors come to see the town's heritage and notable Antebellum architecture.

The film itself -- a tale about three sisters that reunite in their hometown of Natchez at Christmas --will even premiere in Natchez four days earlier than its network debut; a gift from the production crew who were smitten with the town to its residents.

Actor Erin Cahill sat down with Cruise Critic recently to chat about what it was like to film in Natchez and to be on-location aboard American Duchess.

"One Of the Most Loving Experiences"

"I have to tell you, it's so rare of production to be embraced by a city," said Cahill "We have a lot of trucks. We have a lot of equipment. Sometimes it's not always easy to get around us. We tend to shut things down and take up space. But the way we were embraced by the town of Natchez was so special and so unique. From the mayor to businesses to individual citizens who helped by loaning us a car, offering up their home...it was just one of the most loving experiences I've had making a movie."

The addition of American Duchess to the production was a decision made during the film production's location scouting trip. Producers saw the ship tied up alongside and made the decision to make it a part of the movie.

"American Queen Voyages was just so generous," Cahill said. "We were so thrilled to be able to film there, aboard American Duchess. But I laughed because I have never taken a cruise.

"When we got to the dock and we saw the ship ... I mean, even before you get to the dock, you can see it from halfway through town. It's so big and majestic and beautiful."

Passengers, too, were surprised and delighted to discover they'd been sailing with a film production -- and many marveled at the Holiday décor that the ship had been dressed with in September.

"I was thinking about the cruise ship customers and what they must have thought and how they must have been like, 'Wow, what's happening?'", said Cahill. "Because it was hot outside. You know, September in Mississippi is nothing like Christmas in a traditional snowy, cold, kind way. To see the beauty of the ship and then be parts of it decorated for Christmas in such a juxtaposition of the weather, was really special. I think everybody really had fun with it."

While the production was only onboard American Duchess for a short period, it shot on-location in Natchez for nearly one month, making "When a Bell Rings" a cinematic travelogue with a holiday twist.

"To me, our movie is so special because it's got traditional romance elements in it, for sure," says Cahill. "But it's really a love story between these three sisters and family coming back together again in a really real and deep way. I'm just so honored to be able to tell the story with such talented actresses."

Chart Your Own Holiday River Cruise

Those looking to chart their own holiday adventure on the Mississippi can book one of American Queen Voyages' special holiday sailings, many of which still have limited availability.

These include classic Mississippi river journeys from Memphis to New Orleans aboard the legendary American Queen, the aforementioned American Duchess, and the brand-new American Countess, with departure dates throughout December 2021 available on all three ships.

Other itinerary options include a "Country Christmas" sailing from Memphis to Nashville aboard American Duchess, with country music star Lee Greenwood performing onboard during a call in Clarksville, TN; and voyages departing roundtrip New Orleans.

Actual Christmas sailings are offered on December 19, 2021 aboard American Duchess and American Queen in what American Queen Voyages is calling its "Creole Christmas" sailings. These give passengers the chance to indulge in gingerbread decorating, ornament making, and shipboard caroling -- not to mention an extraordinary feast of Creole and Cajun holiday traditions in the South.

A special New Year's voyage will also be offered, with December 26, 2021 departures aboard American Queen and American Duchess, complete with music, dancing and a champagne toast on New Year's Eve.

Away from the Mississippi, American Queen Voyages also sails the legendary Columbia and Snake Rivers roundtrip from Portland, Oregon, and offers weeklong holiday cruises through the Pacific Northwest aboard the classically-styled American Empress throughout late November and early December.

Of cruising, Cahill says her first foray onboard American Duchess may not be her last.

"Having never been on a cruise ship, I was blown away by how majestic the ship was," she told Cruise Critic. "It was grand. It was like the nicest, fanciest, most well-thought-out hotel, but it was on the water.

"I'm really blown away by it. I would love to go on a cruise one day on American Duchess."