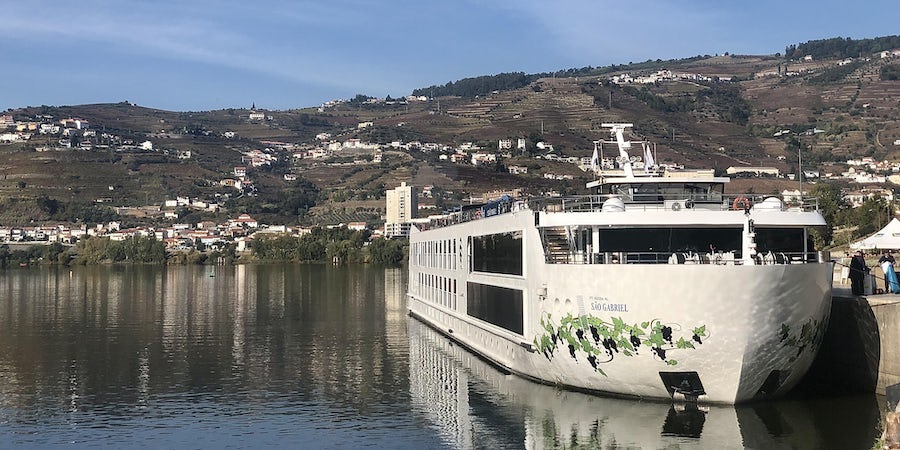 Sunning and Sipping on a Portugal Douro River Cruise: Just Back From Uniworld's S.S. Sao Gabriel

Contrary to popular belief, most river cruises aren't all that relaxing. You're too busy coming and going for constant excursions, usually one in the morning and one in the afternoon, to really slow down and enjoy the river itself.

That's not the case on Portugal's Douro River -- and we couldn't be happier. We're just back from a late-October cruise on Uniworld's new Sao Gabriel, where we did very little other than relax and drink wine. After the past 18 months of pandemic-era ups and downs, sometimes that's enough.

Curious whether a sun-and-wine-soaked river cruise through Portugal is for you? Read on.

All Douro River cruises begin and end in Porto, the second-largest city in Portugal that has UNESCO World Heritage status. Simply put, Porto is adorable, and you'll wish that you added more time to your trip here.

No matter what line you sail on, ships dock in Gaia, across the river from Porto. It's an easy walk across a pedestrian bridge into Porto, but for those who don't want to trek over on their own, Gaia has its own vibrant riverfront full of restaurants, shops and -- most important for the town's history -- port houses where you can taste.

Our Uniworld cruise offered several excursions in the city. We took the more active option -- a walking tour "like the locals," which lived up to its name. We walked nearly four miles on the first day and received a nice overview (although there's not really time to visit popular sites like Livraria Lello, the bookstore that allegedly inspired Harry Potter author J.K. Rowling. Come in early or stay an extra day).

Porto has plenty to do, and even more to drink. From Day 1, your Douro River cruise will start to immerse you in all things port. The fortified wine has been crucial in the history of the Douro River Valley, and you'll see familiar names such as Sandeman, Taylor and Dow along the riverbank in Gaia.

Don't worry if sweet wines aren't your thing, though. Portugal has more than 250 varieties of grapes, many of which aren't grown anywhere else so there's no shortage of other things to drink. We loved the Vinho Verde -- translated as "green wine," made from green grapes -- with its bright flavors and slightly fizzy body. The red wines were also full of chocolate and berry notes. (If you don't drink wine at all, however, we'd say that this itinerary would be a difficult one, as some days have little to offer beyond vineyard visits.)

Lines Returning to the River

By fall 2021, most river cruise lines had restarted operations, and we saw ships from Emerald, Tauck, Viking, Vantage, A-Rosa and AmaWaterways sailing, among others. All are considerably smaller than what you find on the Rhine and Danube, with most carrying only 100 passengers. The reason is evident once you get upstream and go through the Douro's narrow locks. Larger ships simply can't get through.

The main differences we noticed between ships were the inclusions, with lines such as Uniworld and Tauck offering more within their fares, as well as niceties such as plumper cushions on the sun deck lounge chairs. Nearly all ships have small plunge pools. Some ships have balconies, but this seems to be the exception, not the norm.

On S.S. Sao Gabriel, our French balcony room came with a large picture window that could lower halfway with a push of a button. It brought fresh air into the cabin, while keeping precious square footage (our room was a tight squeeze at 156 square feet).

Ships sail on the Douro only during the day, not at night. So any Douro River cruise comes with long periods of scenic sailing. It was fairly common to get off for an excursion in one town, and meet up with the ship at another.

In terms of when to go, keep in mind that summers in Portugal can be very hot. While the tourist season on the Douro reaches its height in July, visiting during the shoulder season paid off for us, with better temperatures and lovely autumn scenery.

Days on the Douro moved at a leisurely pace. Our mornings were mainly spent in the sunny bistro at the front of the ship, drinking cappuccino from the self-serve machine, although quite a few fellow passengers started early with Bloody Mary's and mimosas.

A small fitness room had two treadmills, as well as weights, an elliptical and a bike; we were usually the only people here. A stretch class took place at 7:30 a.m. on the top deck, but we generally chose to sleep in. (Uniworld prides itself on its comfy beds and between the mattress and the highly effective blackout curtains, we found it very difficult to rouse ourselves in the mornings.)

On a rainy morning, we watched the ship's pastry chef make pastel de natas, the delicious egg custards synonymous with Portugal. On another day, the cruise manager gave a lecture about Portuguese explorers. Far more entertaining were the two evenings of local entertainment -- a fado troupe that showcased the emotional Portuguese songs and a rousing performance of flamenco after a day in Spain.

In the afternoons, the cushy loungers on the top sun deck were the place to flop after an off-boat wine tasting. Even in late October, it was warm enough for some to swim; we were glad we packed a pair of shorts and some T-shirts. Afternoon outdoor naps, a glass of wine never far away, became part of the daily agenda.

The service from our all-Portuguese crew was always friendly. We received an excellent massage from Fatima, the spa therapist onboard. A favorite wine from dinner appeared in the bar for us upon request. When we brought some jamon iberica bellota back from Spain, the bar staff arranged it in a lovely presentation for us, with some Portuguese cheese and wine. And both main cruise guides, Ricardo and Barbara, kept us entertained with serious commentary and funny stories.

Evenings consisted of a four-course meal and after-dinner time in the lounge, if you could stay awake after drinking wine all day. Several women in their 40s and 50s were on the ship, traveling with their older parents (the average age on our sailing was 70 to 75), and they kept things lively at night. Dancing even broke out a few times.

Several days on your Douro River cruise are spent scenic sailing through steep hills and terraced vineyards. While the river has been tamed by a series of locks and dams, there are portions that are barely inhabited; Portugal, like many countries, has seen an exodus from poorer rural areas to the cities and towns on its coast and south.

The large wineries are called quintas in Portugal, and your cruise will include several visits to different ones (again, if you don't like wine, you'd be a bit lost on this trip). Uniworld arranged a lovely lunch in the cellars at Quinta de Pacheca on one day, and on another, we sampled port at Quinta do Seixo, an estate owned by Sandeman.

The lack of vigorous activity didn't seem to bother most passengers on our ship. One more rugged excursion to the archeological park at Coa was canceled due to lack of interest. Rain at the end of our trip meant we were unable to go biking in Porto, one of Uniworld's Connoisseur extra-fee excursions.

Keep in mind, however, that our cruise only had 65 passengers on it. Many ships had been running with even lower counts, we were told, particularly early in the summer. The hope is that by the 2022 season, the ships will be back at fuller capacity, which could lead to a broader spectrum of passengers being onboard -- and more people up for active options.

(Emerald and AmaWaterways, two lines known for active river cruising, also sail on the Douro. Both are worth a look if you're OK dialing down the luxury and inclusions for more biking and hiking choices).

The reduced number of traveling people turned out to be in our favor for one of the highlights of our cruise, a day trip into Spain to visit Salamanca. It's a long haul on a bus to one of the oldest university towns in Europe, two hours each way. But you don't want to miss the historic sandstone buildings that seem to glow in the sunlight, giving Salamanca its nickname, The Golden City.

Before the pandemic, the Plaza Major and streets leading the cathedral were packed wall to wall with tourists, we were told. During our trip, we were actually able to enjoy the cafes and bakeries without crowds. Founded in 1134, the University of Salamanca usually draws about 28,000 students from around the world. In 2021, with many collegiate study-abroad programs still in flux, the city seemed much quieter.

We liked how Uniworld arranged our time here, allowing us to go off on our own for lunch, while still having a short walking tour with a guide. We were even able to squeeze in a short visit to Casa Lis, an Art Nouveau home-turned-museum.

We found that our Douro River cruise with Uniworld gave us a nice introduction into Portugal. Most people on our sailing were spending a few more days with the line on an extension south to Lisbon, and we were jealous. We left wanting more of this gorgeous country.

The pace of the trip gave us time to slow down. I haven't slept late that many days consecutively in a long time. On the other hand, I will need to detox from the constant wine and port tastings (and my waistline definitely needs a break from all those irresistible Portuguese pastries).

If a lazy, slightly hazy cruise through a small country with a distinctive history and cuisine appeals to you, then the Douro River is a no brainer. Particularly after the challenges of COVID, a vacation where you can truly relax while still traveling internationally might be just the ticket for 2022 -- and beyond.