You may also like
Dismiss
16 Cruise Apps You Need Right Now
5 Trends in Onboard Cruise Ship Technology
Cruise Ship Lifeguards: Which Cruise Lines Have Them?
What is OceanMedallion on a Cruise?
12 Bad Decisions That Could Ruin Your Cruise
What Lines Are Doing With Next-Gen Cruise Technology
Pictures of Carnival Panorama
Royal Caribbean Cruise FAQ
Why Germ-Zapping Robots and AI Technology Could Be the Future For Cruise Ships 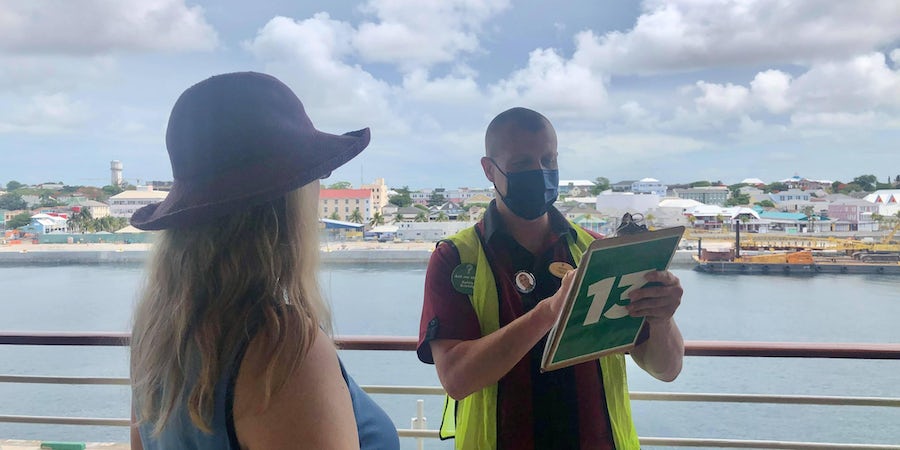 E-Muster Drill on Adventure of the Seas

The muster, or lifeboat, drill has been a staple of ocean voyages for over a century, required by the international maritime treaty known as SOLAS, or Safety of Life at Sea. The first iteration of SOLAS dates back to 1914, when it was implemented in response to the sinking of the R.M.S. Titanic two years prior.

By 2019, the muster drill aboard modern big oceangoing ships had become something of a lumbering beast. Passengers were either relegated to hot (or cold) exterior decks, shoulder-to-shoulder, for nearly an hour; or crammed into a myriad of public rooms while hard-to-hear crewmembers made announcements over the public address system.

Then COVID-19 hit and made large, shipwide gatherings impossible. And from that hardship came innovation: the digital muster drill.

Royal Caribbean first patented the idea in 2020, and similar systems have now been adopted throughout the industry. Passengers can now complete safety information on their smartphones or stateroom televisions, and visit their designated muster stations in person to check in. Staff members scan keycards to check passengers in, and the process is complete. No crowds, no lines, no trip-hazard lifejacket straps required.

Throughout the year, Cruise Critic's editors have been on ships of all shapes and sizes as the industry has returned, and the digital muster drill has been one of the sleeper hits of each voyage.

What should cruisers know about e-mustering, and what have Cruise Critic's editors learned? Read on.

The biggest advantage to the new digital muster drills -- apart from the obvious COVID-era benefits -- is the sheer convenience the new system offers to passengers. And, in most cases, that convenience starts with the cruise line's own smartphone app.

Colleen McDaniel, Cruise Critic's Editor-in-Chief, agrees: "Having a great app that makes muster a breeze is essential. Royal Caribbean and sister company Celebrity have taken this approach. Passengers can watch the muster drill and listen to the emergency signal on their mobile devices using the cruise lines’ apps. And they can do it several hours before boarding. Once onboard, they only have to check in at the physical muster station to finish the process. We did it before we even went to our cabins for the first time, so nothing stood in the way of first-day fun."

Many lines are encouraging passengers to complete their muster procedures as soon as possible. Carnival, for example, has limited the number of drinks passengers can have on that first day before the muster drill; that limit isn’t lifted until the muster requirements are completed.

Chris Gray Faust, Cruise Critic's Managing Editor, says there's another more subtle advantage, too: "We like that the new e-muster format is allowing cruise lines to put their own personality on display, right away. The Royal Caribbean safety video we watched onboard Allure of the Seas had a playful “we’re better together, apart” message, while Viking showed up front that it was all business.

"We have mixed reactions, however, to Virgin Voyages’ hard-rock, tongue-firmly-in-cheek muster video, with one of us loving it and the other hating it. Too much?"

Like any new process, there is always room for improvement.

Because there is no longer a set time in which to complete the drill -- other than having to have checked in by the time the ship sails -- it is resulting in delays on some sailings as passengers continue to be paged over the ship's intercom to complete their muster formalities.

According to Chris Gray Faust: " We’ve been on several cruise ships, including Carnival and Royal Caribbean, where the captain was forced to call out the names of specific passengers who hadn’t completed the drill yet. Is “muster-shaming” the new equivalent of a 'pier runner?' Time will tell."

Not every line has their protocols firmly ironed out yet, either. On MSC, for example, passengers could watch the muster drill video on their stateroom TV at any time on their first day (or beyond), but a check-in was required at a set time, meaning 1,500-plus passengers were all taking the stairs (the elevators were shut down) at once, creating congestion and making the process long and tedious, not to mention COVID-questionable.

Inconsistency is the thing that's truly problematic at this point in time. Some lines give you a brief spiel on what to do at your muster station in an emergency, while others just zap you in and usher you out the door. We're pretty sure there's a happy-medium between lots of information and none at all.

What We'd Like to See as Digital Muster Drills Evolve

We get that the muster drill is focused on maritime safety, and we’d hate to dilute that messaging. But a quick reminder at the muster station of the ship’s rules regarding masks and social distancing rules might help solve the confusion we saw on several ships these past few months and get all passengers on the same page immediately.

We’d also love it if all cruise lines had the ability to use their apps to really make the muster drill easier. Staggered check-ins are the key to making the process less congested. We like the idea of a quick follow up test, too, just to make sure passengers understood their emergency requirements. (Royal Caribbean and Celebrity are currently doing this on their sailings, with a “quiz” coming mid-cruise to see how well their messaging is getting across to their passengers.)

That echoes passengers we spoke to on our Princess sailing, who remained unsure about the other rules of the ship -- including where smoking was and wasn't allowed onboard. Old-school muster drills were many things, but they all hammered home the importance of being fire-safe onboard.

In this COVID-era, some of that practical information is being lost in the myriad of changing health and safety protocols related to the coronavirus.

Overall, however, cruise lines have done a splendid job of rethinking how passengers muster safely prior to the start of each voyage. Digital mustering allows passengers to more easily complete safety formalities, and does so in a way that is, overall, quick and efficient for today's megaships.

It's a change we hope will stick around and evolve well after the COVID-19 pandemic has passed into the pages of history.