You may also like
Dismiss
Compare the 17 Best Small Cruise Ship Lines
17 Epic Cruise Fails (Reader Edition)
6 Things to Expect When Cruising to Potentially Unstable Areas
Top 8 Long Haul Short Break Cruises
How to Prepare for a Snorkel and Dive Cruise
Best Cruise Travel Agents
Sail Here, Not There: Avoiding Overtourism in Cruise Ports
Cruise and Stay Holiday Tips
48 Hours in Auckland Before or After a Cruise
What Is a Cruise Ship "Flag Of Convenience" -- And Why Does It Matter? 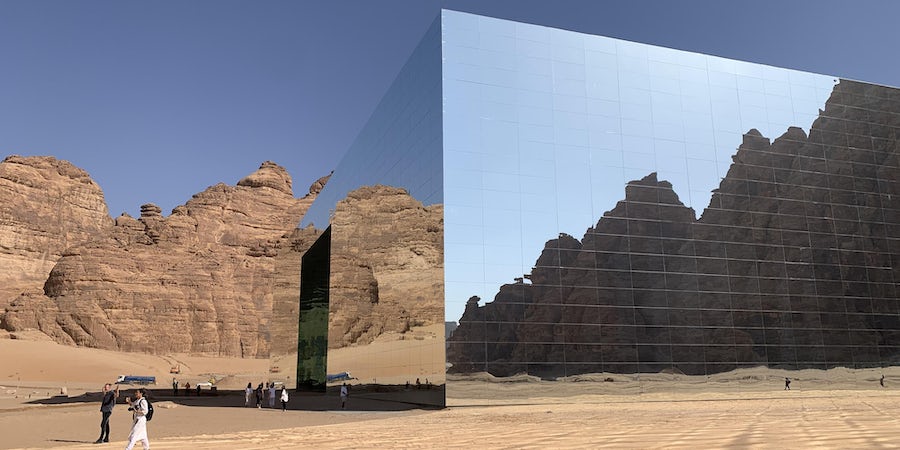 'A Cruise Destination Like No Other:' Live From Scenic Eclipse in Saudi Arabia

Scenic Eclipse has been operating in Saudi Arabia since July 2021, offering cruises for Saudis only from Jeddah along the Red Sea coast, stopping at tiny islands and lesser-known parts of the coast along the way.

I'm on a special one-off sailing, between Saudi charters, for top trade partners, media, employees of CruiseSaudi and national airline Saudia, as well as a large number of Scenic staff.

This is the first ship carrying international passengers to operate in the Kingdom since 2004, reveals founder and CEO of Scenic, Glenn Moroney, also onboard.

It's because of CruiseSaudi, a body set up in January specifically to promote cruise tourism to the country, as the Kingdom makes a major push to attract the industry.

The aim is ambitious: To build five ports along this stretch of the Red Sea coast, as well as redevelop Jeddah's port to integrate it into the city, and thus creating an international cruise market for the country. And they're doing it pretty much from scratch.

"The infrastructure is at a very early stage, and COVID delayed the progress by a couple of years," Moroney said. "But I hope that all of you in 10 years' time will look back and say: 'I remember when I went there, boy hasn't it changed'."

But huge questions still remain, way beyond port infrastructure. Saudi Arabia is a country where homosexuality, sex outside marriage, and free speech are banned, and any one of which can land you in prison or worse. And it's also where women's rights are very hard-won (but appear to be moving in the right direction).

However, change is most definitely in the air, as Moroney puts it:

"I know you all have a perception of what you believe Saudi Arabia is and if you haven't been here before I hope that the next five days and some of the things you see and in particular the people that you meet will change your perception.

"From my perception when I came here for six days and we flew around the country, I have traveled very widely but I have to say the difference between my expectation and the reality was wider than anywhere I have been before."

He added: "There is a drive right from the top to open this country up."

It's all part of Saudi Arabia's Vision2030, which aims to promote tourism, restore much of the heritage, educate the population (70 percent of who are under 30) and as he says, open up this vast, largely unknown country.

The cruise starts and ends in Jeddah, which has long been considered the most "liberal" (in the broadest sense of the word) city in Saudi. We are then headed to a private island in a chain to the north of Jeddah; the port city of Yanbu and the extraordinary UNESCO World Heritage Site of AlUla.

Here are my thoughts after five days onboard Scenic Eclipse in Saudi Arabia.

A lot has changed in 10 years (when I first came), in particular in gender equality, with women far more of a presence at every level of society .

At the reception of the Jeddah Hilton, for example, we are greeted by female receptionists. Women and men mix freely together in the lobby and do not have to take separate lifts to separate gender floors.

On a walking tour around the old town, you can see the change -- women, many with heads uncovered, walk in the streets, drink in the cafes and even run small shops.

Since 2019, women have been allowed to own and operate businesses, work in hotels and other tourist-facing jobs, walk around without being chaperoned and without having to be covered head to toe in black. And on our tours, half of our guides are female.

The infamous "morality police," who would patrol the streets ensuring ankles weren't showing and men and women weren't holding hands, had their powers stripped around three years ago.

We're still curiosities -- a large group of Western tourists will always attract stares wherever you go in Saudi Arabia -- and are met with smiles, many say "As-Salaam-Alaikum" (Peace be unto you) as we wander around, and some very enthusiastic guides and photographers take pictures of us taking pictures.

It's worth noting that Saudi Arabia is dry, unlike many westernized neighbors. While the ship is in dock and within 12 miles of the Saudi coastline, alcohol is not served. Fun fact: Every one of the 100 different bottles of whisky which make up the focal pointof the main bar in the Atrium, are replaced with coffee pots when the ship is docked.

Also worth noting is that this sailing is a one-off: Eclipse sails to Antarctica at the end of this season, and there are no plans to return here. Sister brand Emerald Azzurra will operate a season here next year, and will operate a similar itinerary.

Scenic has arranged an exclusive visit to a private island, part of the Jabal Al-Lith chain off the Red Sea coast, where we enjoy water sports and for some of us, a dive in the ship's onboard sub, Scenic Neptune.

It's a beautiful beach day, though we are confined to a limited area due to nesting turtles and birds, which call this tiny island home.

Scenic Neptune takes us to the edge of the reef wall, a sheer drop off, to around 60 feet. It's a weird experience, our vision of the underwater world distorted by the concave glass (things appear much nearer and smaller; it's almost like going through the Looking Glass). It's another extraordinary experience and a first for me.

If we are curiosities in sophisticated Jeddah, we are virtual film stars in Yanbu, which hasn't seen a Western tourist -- certainly an international cruise ship passenger -- for 17 years.

A huge delegation greets us, and it's like the whole town is out taking pictures of us and filming us.

The town center has been spruced up in anticipation of the hoped influx of tourism, and it's a bit like EPCOT -- a recreation of a traditional Saudi town, complete with the (presumably) newly named "Tourist Street" and "Traditional Shop," while the old buildings are covered with hoardings.

It's enchanting but also somewhat unsettling, with locals wandering around like extras in a movie, a recreated "traditional" school, a young boy waiting patiently in a barber's shop for a haircut that never comes, and a young man carrying pails of water around the shiny new town square.

Yanbu is primarily the gateway to Saudi's first UNESCO World Heritage Site of AlUla, and it's an early (and dry) night ahead of our full-day trip to this archaeological marvel the following day.

AlUla is the size of Belgium (let that sink in for a moment) -- located 1,000 kilometers from Jeddah, in the northwest of the country, and covering 22,561 square kilometers.

It's part natural wonder and part human wonder, dating back thousands of years to when the Lihyan and Nabataean kingdoms reigned.

The most well-known and recognized site in AlUla is Hegra, Saudi Arabia's first UNESCO World Heritage Site. A 52-hectare ancient city, Hegra was the principal southern city of the Nabataean Kingdom and the stand-out site is comprised of 111 remarkably well-preserved tombs, with elaborate facades cut out of the sandstone outcrops.

If you've been to Petra, in Jordan, it has a similar feel, but it's the sheer scale of this site that blows the mind -- with desert stretching literally as far as the eye can see, and the most extraordinary rock formations -- towers, stacks, peaks, and escarpments, many appearing to almost defy gravity. One agent traveling with us said it reminded her of Death Valley, and for Australian readers, there are also similarities to the Bungle Bungle Range in the Kimberley, Western Australia.

But for me, it's the astonishing modern man-made structure literally in the middle of the desert, that that took my breath away -- a vast building used primarily as a concert hall, covered in reflective glass panels, called Maraya, or mirrors in Arabic. Completed in late 2019 by Italian architect Gio Forma, and shut soon after because of the pandemic, this is officially the largest reflective structure in the world (according to the Guinness Book of Records). His thinking: I can't improve on the natural beauty around me, so I shall reflect it.

Tonight we are being treated to a desert dinner experience -- complete with camel riding and local cuisine, a fitting end to a truly remarkable trip.

There is still a long way to go in Saudi Arabia, but it has to start somewhere. And if you come with the mindset that tourism, and within that cruise tourism, can be a force for good, then you will love discovering what this extraordinary country has to offer.