You may also like
Dismiss
5 Best Cruise Costumes for Theme Night
The Beach Club at Bimini: What You Can Expect From Virgin Voyages' Private Experience Ashore
Cruise Vision 2020: The Future of Cruising in Australia and New Zealand
The Most Exciting Ship Launches in 2020
Rock Cruises for Music-Lovers
Best Gifts for Cruise-Lovers
New Cruise Ships 2020
Best Over-50 Singles Cruises
Pictures From the Ultimate Disco Cruise
Squid Ink: A Cruise Ship Tattoo Shop So Nice, I Got Inked Twice: Live From Valiant Lady 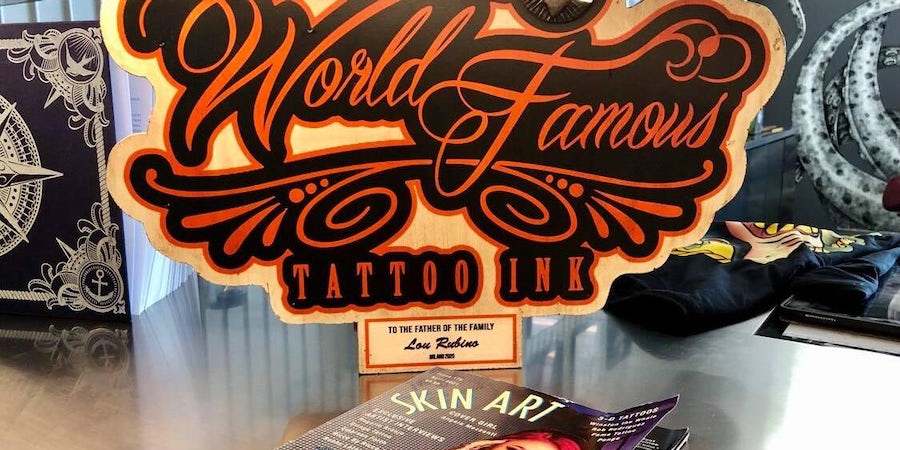 Squid Ink on Virgin Voyages: What You Need to Know Before Getting a Tattoo on a Cruise

Tattoos have been a mainstay of sailors for several centuries; and anyone who has been on a cruise ship in the past decade knows that quite a few passengers sport ink.

Although Virgin Voyages may not be the first cruise line to actually put a tattoo parlor on its ships (that honor went to German-line TUI Cruises), Squid Ink has certainly garnered the most publicity for it.

Frank Weber, the line's Senior Vice President of Hotel Operations, calls Squid Ink "his baby" and with his sleeve of tattoos, he is living what he's selling. He said the idea came because he noticed that passengers were getting tattoos to commemorate their sailings when they got off the ship.

And so far, the gamble is a success. Lines for appointments at Squid Ink begin before the shop opens on the first day, and the artists are so busy, the line is considering adding a third chair. Considering that the tattoos carry a minimum price of $250, Squid Ink may end up being a nice money maker for Virgin -- hardly the gimmick that naysayers thought it might be.

We're on the ship's "MerMaiden" cruise out of Miami, and if you're curious about getting inked at sea on Scarlet Lady or another Virgin Voyages ship, here's our guide for what you need to know.

Choose Your Design Before You Board

It should go without saying that if you want to be inked with something that will be on your body forever, you should do some advance research. But Dennis Gensinger, piercer and manager of Squid Ink on Scarlet Lady during our sailing, said that was the number one tip he has for first-timers.

"The first timers, they aren't really sure what to get," he said. While Squid Ink has inspiration design books available for people to browse, it's more helpful if a passenger comes in with a reference image and an idea of where they want it to go.

Your design also dictates how long your appointment needs to be. A micro-tattoo on your finger takes much less time than a custom portrait or a larger back piece. If you're wondering what designs we saw people getting, they were all over the place -- from an anchor on the foot to mark a first cruise to a small A+ blood type tattoo above the breast to an email address on the underside of an arm. Really, anything goes.

The scramble to get a good Squid In appointment is no joke -- and the competition is particularly fierce if you want one on the last day. Why? Because fresh ink is not supposed to get wet or have excessive sun exposure, which rules out being outside for much of your sailing.

For regular sailors, you can't book your cruise until the ship pulls away from Miami. On our sailing, the doors opened at 7 p.m., and the line started to form before then. Last day appointments were gone within 33 minutes, we were told. (RockStar suite guests get the extra perk of being able to consult with an artist in advance).

Tattoo artist Justin Hauck says that if you are really set on making a tattoo part of your cruise, be flexible with your date -- or do whatever you can to get there early. "You've got to be in it to win it," he said.

Weber said that the line is exploring what can be done to help sailors plan and book their tattoos in advance, either via online consults or appointment making. Still, there's only a certain amount of planning you do without talking to the actual artist, Hauck said. "If you want anything substantial, we're going to tell you to come in here."

Know the Costs and Time Involved

Many first-timers receive a bit of sticker shock when they hear that even a small tattoo will set them back $250. It's not unusual for in-demand artists to charge minimums on land, but Squid Ink's price is a little high if you're getting a tiny design.

The minimum didn't seem to faze the people lined out the door. Having bragging rights that you received your tattoo at the first shop at sea might be worth the cost.

It's also important to realize that many tattoos do take time to do well. Adding color adds time -- and price. Likewise, anything custom will not only cost more, it will take more time than a standard design. Plan your day accordingly.

Confession: I came onboard with a design and a placement ready to go (I already have one tattoo). But after my consult with Hauck, I realized that my art wouldn't fit exactly where I had planned it to go. Rather than live with a last-minute decision, I decided to wait until I had more time to think it over.

And that's exactly how a good consult should go. The artists that Virgin has hired for Squid Ink (via contractor World Famous Ink) rotate through short-term contracts, but all have years of experience, Hauck said. You have to, if you're going to carve at sea, although he says that the movement of the ship isn't an issue.

"People jump around in the chairs anyway when we're at home," he said. "If you have the years of experience, you can cope with this."

The biggest bummer about getting a tattoo at sea is that you can't really swim or be out in the sun afterward. Instructions at Squid Ink tell you to avoid direct sunlight for two weeks afterward and to avoid baths, pools, spas, hot tubs and salt water -- which essentially means you'll be inside for the rest of your sailing.

You'll also have to do the usual routine of applying ointment (Aquaphor is preferred) every few hours. If you don't bring your own, you can buy it at Squid Ink.

Even with these restrictions, we saw plenty of people skipping time on shore for time in the chair. It's all in your priorities.

Because you need to make an appointment and have a consult before you get your actual tat, Squid Ink hasn't had problems with people showing up drunk and making a permanent decision they might regret.

"No actual clientele," Hauck said when asked if the shop had seen a lot of drunks. One man in the U.K. was kicked out for making obnoxious comments while watching others getting inked -- bystanders are separated from the artists by counters and a rope while work is going on.

Not Ready? Consider a Piercing

If the full commitment of a permanent tattoo makes you queasy, body piercings are also available. My friend, who already has three tats, opted for a nose ring on our sailing. Not only are the piercings cheaper -- $85 compared to $250 -- they take much less time and you can walk in when you feel like it.

Gensinger does the piercings, and he's about the nicest and low key person you might encounter on the ship. He showed the utmost patience during the shop's busiest time on the sea day.

Hauck is returning as an artist on Valiant Lady when it debuts in the U.K. in March 2022. "It's been nuts," he said. The tattoo shop concept had been proposed for other cruise lines, he said, and they had all passed; Virgin deserves kudos for bringing the concept to life. "I feel like everyone else made a big mistake."