You may also like
Dismiss
Holland America vs. Princess in Alaska
7 Reasons to Cruise Princess in Alaska
Alaska for Foodies
Cruise with Us to Alaska
White Pass and Yukon Railroad From Skagway: Shore Excursion Review
5 Reasons to Love Seabourn Cruises in Alaska
Top Cruise Destinations 2020
Best Cruise Ports for Wheelchair Users
Why There's Still Nothing Like a Day on the Water
Back in Alaska, The Princess Cruise Way: Live from Majestic Princess 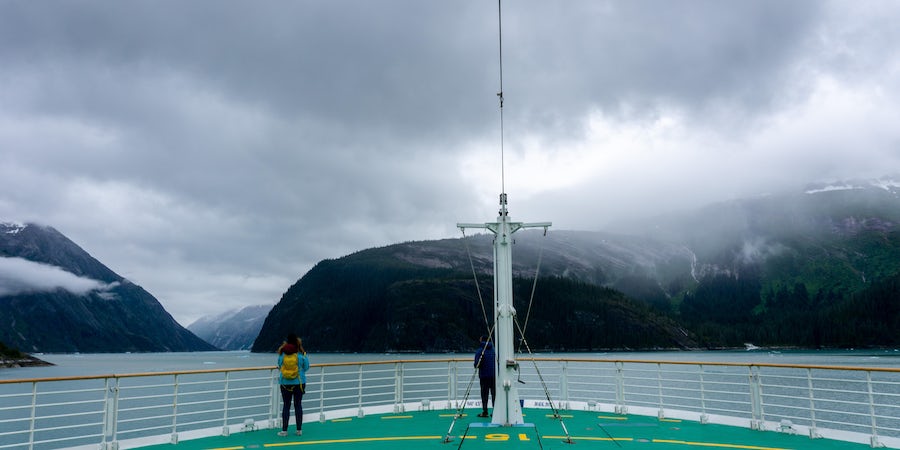 Alaska Cruises Are A Go For 2022, Though Scope of Cruise Season Remains to Be Seen

It might be the most impactful cruise season in Alaskan history, but with just three weeks left in the three-month-old 2021 Alaska cruise season, thoughts are already turning to what next year will bring to the Last Frontier, with just six months to go before cruises return in earnest.

The 2022 Alaska cruise season officially begins on Saturday, April 23, 2022, when Regent's Seven Seas Mariner makes a call on remote Dutch Harbor in the Aleutian Islands. The season kicks off more formally on Monday, April 25, when Norwegian Bliss arrives in Juneau from Seattle on the first true Alaskan cruise of the year.

The 2022 season is projected to run right up until October 23, 2022, when Norwegian Encore arrives in Seattle for the last time.

That ship -- which debuted in Alaska this year -- is running some of the latest-season big-ship itineraries the region has ever seen.

Cruise Critic sailed to Alaska three times this past summer -- aboard Serenade of the Seas, the first ship to return; Norwegian Encore, which inaugurated new terminals in two separate ports; and a late-season voyage aboard Majestic Princess.

While the 2021 season was abbreviated substantially, Cruise Critic found local stakeholders and residents more engaged than ever. We spoke to several people while on-the-ground in Alaska to gauge their reactions to the cruise season that almost wasn't.

"I think we all went into this with both a lot of anticipation and concern," Juneau resident and UnCruise CEO Dan Blanchard told Cruise Critic in an interview in September at The Hangar restaurant in Alaska's capital city. "What we've learned this season, for us, has been really valuable."

One of the most significant challenges for operators in Alaska this season -- and the issue that still poses a real problem for 2022 -- is how to find and retain talent. Tour guides, coach drivers, even Captains are in short supply in Alaska -- and the demand for them in 2022 will be astronomical.

An advert in the Juneau Empire newspaper, for example, offered a $1,000 signing bonus to qualified motorcoach drivers who had their license and air brake certifications, and could start immediately.

"A lot of tour operators decided not to open this season, mostly because they couldn't get staff," Skagway Borough mayor Andrew Cremata told Cruise Critic in an exclusive interview in late September. "I think one of the biggest challenges for business owners next year is going to be getting people to come up here and work."

That labor shortage is going to have a direct impact on shore excursions as local tour operators look to cover their costs.

"The price of the tours is going to go up," Cremata said. "The cost of doing business is going to go up. If you can work at McDonalds in Seattle for fifteen bucks an hour, and someone is telling you, 'Hey, come work in Alaska, live in dorm-style housing for $12 an hour'…it's a tough sell."

If you've ever gone whale watching, cruised Misty Fjords or set foot on a tour of the Sawyer Glaciers, you've probably been aboard an Allen Marine boat. Based in Sitka, the company -- which also owns small-ship operator Alaskan Dream Cruises -- has also been affected by the shortage of qualified personnel.

"On the dayboat side, we had fifty, sixty Captains hired in 2019," owner Dave Allen told Cruise Critic at the company's yards in Sitka in July. "This year, there's 10 of them back. Maybe."

"We should be able to run all of the boats that we need to run," Allen said, pointing out that he, and the other team leaders all have Captain's licenses. "But, we're the backup. Usually, there's another layer of backup before it gets into our licenses."

"It's really surprising just how complicated it's been."

For some, the downtime caused by the pandemic and the lost 2020 cruise season has provided time for investment in port infrastructure and necessary operational upgrades.

The White Pass & Yukon Route railroad -- one of Skagway's premier tourist attractions -- used 2020 and 2021 to perform necessary track repairs and roll out a fleet of brand-new diesel locomotives.

"The new fleet will be primarily used for our summit excursion (to Fraser, British Columbia), and we can go from two engines to one to pull our 14-car trains," Jacqueline Taylor-Rose, manager of marketing and product development for the WP&R, told Cruise Critic in an interview in Skagway.

As to how the pandemic affected the WP&YR -- now owned with a majority stake held by Survey Point Holdings and their affiliates, along with a minority stake held by Carnival Corporation & plc -- Taylor-Rose said the railroad has had to adapt to the changing times, something it has done constantly since its inception over a century ago.

"We've become really good at handling the unknown in 2020," Taylor-Rose said. "When we had the chance to operate in 2021, it was so great to get back to business. We're looking forward to 2022 when we can really start ramping things up and running more trains and seeing more cruise ships coming into port."

This year, passengers riding the WP&YR could only traverse the first 14 miles of track due to bridge repair work. The railroad plans to relaunch its full-length journey up the summit, and across the border to British Columbia, next year.

For other tour operators, just being shut down for a year and a half took its toll.

"An extra year of mould and dust and sawdust…all that stuff had to be fixed," Boone Scheer, manager at the Great Alaskan Lumberjack Show in Ketchikan, told Cruise Critic in July. "The site was shut down for over a year so we had all kinds of animal critters living in here."

"Getting things show-ready was a task, but we've enjoyed it."

The Great Alaskan Lumberjack Show is one of Ketchikan's most easily-accessible, and popular, attractions, thanks in part to its location about one block in from the city's first cruise berth, adjacent to the businesses at Salmon Landing.

For 2022, Scheer remains optimistic. "Our main goal is to get back on our feet for 2022, support the cruise ships, support Ketchikan," he said. "And support ourselves, our business and our employees."

The real unknown right now is what the 2022 Alaska cruise season will look like from the Canadian homeport of Vancouver. Transport Canada has effectively banned all cruise activities in Canadian waters since March 2020, and while the ban is due to be lifted on November 1, leaders in British Columbia continue to push back against the cruise industry even as vaccination rates within Canada rise.

This reticence by British Columbia to welcome cruise back into local waters has led Alaska senator Lisa Murkowski to call for a full repeal of the Passenger Vessel Services Act, or PVSA, that would allow cruise ships to sail from Seattle direct to Alaska without stopping in a foreign port of call -- in this case, Canada.

Senators Murkowski, Don Young and Dan Sullivan passed a bill temporarily repealing the PVSA earlier this spring, which breezed through Congress at the speed of the Klondike Gold Rush. That bill saved the 2021 Alaska season which, although short, provided much-needed relief to Alaskan towns and ports.

On paper, the first ship to sail out of Vancouver will be Holland America's Zuiderdam on Wednesday, April 27, 2022. But as the last year has shown, things can -- and likely will -- change up to the last minute.

What has resonated with stakeholders across Alaska is one truism: that the pandemic will likely not be one hundred percent over by the time next season rolls around. As vaccines are rolled out in greater numbers and cruise and tour operators roll out health and safety protocols intended to keep passengers safe, most expect these elements to linger into 2022.

"I wish I could believe differently," said UnCruise's Blanchard of the end of the pandemic. "But information and science don't tell me this is going to end very soon."

"We're hoping that next year gets back to being as normal as possible," Mayor Cremata told Cruise Critic. "My personal opinion? I think it's probably going to be impacted in some way. Obviously, we're still dealing with the pandemic, but the cruise ships have done a marvelous job at creating a really healthy atmosphere onboard."

"The question is: how many people will we have next year?" Cremata said. "I don’t know. Hopefully we don’t get that full 1.2 million (passengers) here in Skagway; hopefully it's 700 or 800,000. I think that's realistic."

"Come March, we'll have a really good idea of what's coming our way."