You may also like
Dismiss
Making the Most of Your Overnight Port Call
5 Tips for a Venice River Cruise
Po River Cruise Tips
5 Best Cruise Lines for Easter Cruises
What's New in River Cruising for 2018
Barge Cruises vs. River Cruises
One Great Reason To Try a Small Ship Cruise: Magnificent Ports of Call
Are Cruise Ships Allowed in Venice? Background on a Historic Port With an Uncertain Future
New River Cruise Ships in 2021 That Have Us Excited 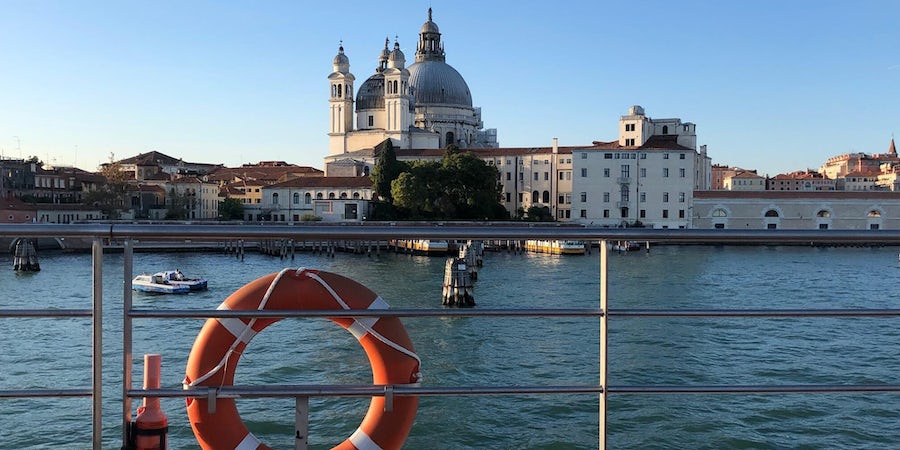 Why a River Cruise is the Best Way to Visit Venice: Live From Uniworld's S.S. La Venezia

The Venice lagoon is misty and moody and the city is quiet. It’s fall season, one of the loveliest times to see Venice.

In a normal year, St Mark’s Square would be packed and tourists would be crammed onto the Rialto Bridge, snapping shots of the grand palaces lining the Grand Canal.

Italy’s tourism scene is still recovering from the pandemic. But there’s another reason Venice feels quiet: there are no big cruise ships. From August 1 this year, any ship over 25,000 tons has been banned from entering the city via the Giudecca Canal, in a move to protect the fragile Venice Lagoon from environmental damage.

Cruise passengers make up a relatively small percentage of Venice’s annual tourist total, which had reached a staggering 20 million per year in pre-pandemic times. But cruise ships are synonymous with the city, gliding along the Giudecca, passengers crowded on deck, gazing down on sunlit squares, majestic palazzi and bobbing gondolas. Now, bigger ships are diverted to the ferry dock in Fusina, near the industrial Marghera area, across the lagoon from the city. Not the same experience, but still Venice.

One small ship, however, is defying the trend and is several weeks into its maiden season. We’re on Uniworld’s S.S. La Venezia, a sleek riverboat that’s based in the heart of Venice, offering week-long voyages around the vast Venice lagoon.

The Comeback of River Countess

La Venezia isn’t new, as such; it sailed previously as Uniworld’s River Countess. In 2019, the ship was famously crushed by the out-of-control MSC Opera, ramming River Countess against the dock at San Basilio, on the Giudecca Canal. If there was ever fuel to the argument to ban big ships, this was it.

Two years on, La Venezia has had a complete upgrade and a new name. Uniworld’s "Super Ships" are known for their lavish decor and this one certainly doesn’t disappoint. The interiors have been inspired by the legendary Venetian Fortuny company, the warehouse of which lies across the canal from where we’re docked. Murano glass light fittings, marble bathrooms, delicately painted ceilings and sumptuous fabrics create a feeling of sheer opulence.

A River Cruise is Great Value

Uniworld falls at the pricier end of the river cruising range; a week on La Venezia comes in at around $430 per person per night. But if you remember that this includes luxurious accommodation, all meals, all-inclusive drinks, WiFi and gratuities, the picture changes. A room in one of the city’s many five star hotels, for example, costs well upwards of $300 per person per night -- and that’s excluding any meals and activities.

What’s more, hotels don’t move. The beauty of a riverboat in Venice is that you see beyond the city, effortlessly. Our week has taken us to Murano island, of glass-blowing fame, colorful Burano and to Chioggia, in the southern reaches of the lagoon. From here, we spent a day in Bologna, while some passengers visited the historic city of Padua.

Some of the loveliest moments have been sailing the lagoon. This vast body of water is like nowhere else, studded with tiny islands and so shallow that ships have to follow a channel marked out by wooden pilings.

On some of our positioning trips between moorings, an ethereal mist has hung over the water. A scenic sunset sail from Chioggia was pure “magic hour”, the sun casting a golden glow over the jauntily colored fishing villages as waiters circulated on deck with trays of Aperol spritz and martinis. One night, a big storm cleared the air and as we sailed north from Chioggia the following day, past Venice and onwards to Burano, the snowy peaks of the Dolomites were clearly visible in the distance.

Not A Traditional River Cruise

While this voyage is billed as a river cruise, we’re not actually going anywhere near the River Po. Fans of river cruising who envisage admiring life along the banks should prepare for this. The crew tell us it’s not unusual to skip Mazzorno, the town on the Po where La Venezia would normally dock.

This week, the reason is that there’s dredging work going on, a constant activity in the shallow lagoon, and the Mose barrier is being tested. This ambitious engineering project blocks off the three narrow entrances to the lagoon when a big high tide is due and will hopefully reduce the catastrophic flooding that Venice is prone to.

In any case, missing the Po doesn’t feel like a big deal for various reasons. The river’s floodplain is vast, flat, and threaded with ribbons of river and canal, under huge skies. The banks are lined with trees, reed beds, and levees, so there’s nothing to see. The lagoon, in contrast, is fascinating, boats buzzing back and forth, waterfowl to spot and villages to gaze at.

The other issue is that to get into the Po, the ship has to cross a stretch of the Adriatic Sea and is not insured to carry passengers for this section, so you have to join a tour on the two days when the vessel repositions. Not everybody on this cruise is physically up to long days ashore so probably regard our altered itinerary as a blessing.

The downside of our extended stay in Chioggia (a pretty town but with limited interest) is longer journeys to visit Bologna and Ferrara. Yesterday’s Bologna trip involved four hours on a coach in total. Luckily, a lunch of hand-made pasta washed down with some excellent wines meant the return journey passed in deep sleep for most.

Of the seven nights, we’re tied up at San Basilio for four. This is Venice’s small ship dock, on the Giudecca Canal, an easy walk to St. Mark’s Square. We should be at the Sette Martiri dock, even closer to St. Mark’s, but the sidewalks there are being strengthened for the forthcoming Venice Marathon, so San Basilio it is. You have to approach cruising around Venice with an open mind!

Either way, we have the best of both worlds; the easy luxury of life on board and the freedom to explore the city. So far, we’ve wandered the banks of the sleepier canals, been for cocktails at the rooftop bar of one of the swankiest hotels and had a late-night pizza on the waterfront.

Uniworld arranged a private, after-hours visit to St. Mark’s Basilica, which was magical, the lights coming on one by one to illuminate 86,000 square feet of shimmering gold ceiling mosaics, some 800 years old. We’ll end our visit with a guided tour of the Rialto market and an independent trip up the bell tower of San Giorgio Maggiore church for what’s arguably the best view of the city.

This week has been an easy, stress free and luxurious way to explore the Venice lagoon. Yes, there have been itinerary changes but we haven’t missed out. Small ship travel is clearly the way forward for Venice, allowing you to have the best of the city, without losing out on comfort.