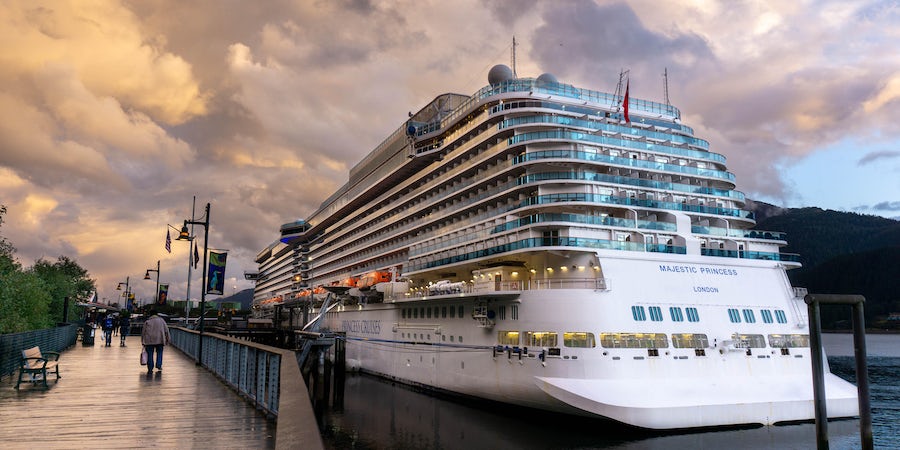 Back in Alaska, The Princess Cruise Way: Live from Majestic Princess

(3 p.m. EDT) -- It is the shortest Alaskan cruise season in decades, but 2021's operations -- which ran this year from July until mid-October, as far as the big ships go -- will go down as one of the most impactful and perhaps even appreciated in the history of the state.

For the third time in as many months, I am on a cruise to Alaska -- this time onboard Princess Cruises' Majestic Princess. The ship was originally built for the Chinese market back in 2017 and has been pressed into service from Seattle this year, modified slightly for the predominantly North American clientele that will sail aboard it.

This is the second-last voyage to Alaska that Majestic Princess will embark on this year before it repositions further south to offer a season of warmer-climate California Coastal and Mexican Riviera voyages. Until then, Majestic Princess will continue to depart Seattle bound for the Alaskan mainstay ports of Juneau, Skagway and Ketchikan, with a day set aside for scenic cruising in beautiful Glacier Bay National Park.

Already, the all-too-short 2021 Alaskan cruise season is ending. Since Cruise Critic was onboard for the start of the season, it only seems fitting we set sail towards the end of it to tally up what the season was like for Alaskans, and what cruisers can expect next year in Alaska.

This is the second time I've sailed from Seattle's Pier 91 this summer, and the second time I've been pleased with the embarkation process. The terminal is located to the west of downtown Seattle in an industrial area, but does not suffer from the crippling traffic and congestion present at the more centrally-located Bell Street Pier 66.

I arrived around 11:30 a.m. and after a documentation check -- the longest part in the entire process -- I cleared security, picked up my OceanMedallion, and was stepping aboard Majestic Princess less than 30 minutes after arriving pierside.

As is becoming standard among cruise lines these days, Princess now conducts its lifeboat drill virtually. While I waited for my stateroom to become available (rooms open just before 1 p.m.), I checked in at my muster station and watched the safety video on the Ocean Medallion app over lunchtime pizza in Alfredo's on Deck 6.  The entire process couldn't have been easier.

The sun came out over Seattle's Smith Cove terminal just as Majestic Princess cast off its lines and moved out into the bay. Passengers ordered poolside libations as the heat intensified out on deck, and cheered uproariously as a video was played on the Movies Under the Stars screen welcoming everyone back to cruising.

The cheering continued as the shipboard cast danced to departure beats up on the pool deck, and even went on as skies forward of the ship began to blacken. This is fall Pacific Northwest weather at its finest. The music stopped and crew started breaking down the sound systems just as the ship was slammed by torrential rain and the heaviest hail storm I've ever seen on a vessel.

That liquid sunshine has been with us throughout, from our bumpy Pacific Ocean crossing to moments of heavy rainfall in Juneau on Tuesday. Nobody minds. This is the Alaska everyone signed up for -- and Majestic Princess is well-suited to inclement weather.

The ship's key feature is its enclosed Hollywood Pool and Conservatory up on Deck 17 forward: a calm space that is unique to Majestic Princess and replaces the more open-air Sanctuary found on other Royal Class vessels.

Because it offers a covered forward-facing viewpoint and an enclosed pool topped with a glass roof, the Hollywood Pool and Conservatory have become popular spots to while away the day. Princess even uses the Conservatory to host its Elite Member lounge each evening from 4:30 to 6:30 p.m. each evening, with hors d'oeuvres and drink specials for the line's most travelled passengers.

And while it's true Majestic Princess and its Royal Class brethren lack a full promenade deck (something prized in Alaska), upper-deck spaces have been ample. The ship's best-kept secret may be the Wake View Bar on Deck 16 aft, which is sheltered from much of the winds that scream down Lynn Canal and Gastineau Channel, but which offers prime seating and outdoor deck space.

There are other features that make Majestic Princess unique in Alaska. The ship's Chinese-themed specialty restaurant, Harmony, provided me with one of the most interesting and unique dining experiences I've had. On other Royal Class vessels (think Royal Princess, Regal Princess, Sky Princess), this Deck 5 forward space would house Sabatini's, which is missing from this ship.

Sabatini's is always good and solid, but Harmony offers a unique dining experience at sea. A holdover from the ship's Shanghai days, it offers a bevy of authentic specialties, from beef chow fun to Mongolian beef, baby bok choy, Cantonese chow mein, and even dishes with century egg -- a Chinese specialty whereby eggs are preserved for weeks or months at a time in a mixture that causes the yolk to turn black.

I enjoyed it so much, I'm going back a second time.

Experienced Princess cruisers will notice some hallmarks are missing from Majestic Princess, like the Wheelhouse Bar and Crooner's, but the clubby Crown Grill Bar and the French-themed Bistro Sur La Mer on Deck 7 make up for it with new lounge and dining options.

(The forthcoming Discovery Princess, interestingly, adds back Crooner's but removes Vines wine bar…so it's always good to check your deck plan first to see what amenities your ship may have, even if it is part of the same class).

This Is Princess's Alaska

Princess has long had a strong presence in Alaska. The line has been sailing to the region for 50 years and in that time, it has learned a thing or two about The Last Frontier.

To that end, passengers will find a whole selection of beers from Alaskan Brewing Company onboard, including the flagship Alaskan Amber. Weirdly, they're not listed on any menu, so just ask any bartender for one. (I only discovered this because I saw them in the cooler when the bartender on the Pool Deck got a Corona for another passenger.)

In the Crown Grill specialty restaurant, passengers can choose to dine on locally-caught seafood, including Copper River salmon, wild Alaska halibut, and wild white salmon. Though the venue carries a $29 service charge, crew tell me anecdotally that it's the busiest specialty restaurant on the ship in Alaska. (An Alaskan-themed menu is offered in the main dining rooms this evening for our departure from Skagway.)

As part of Princess Cruises' "North to Alaska" programming, lectures have been held each day so far in the Princess Theater. These have featured naturalist Michael Modzelewski and author Brendan Jones, and have been informative and of high quality -- similar to what passengers on smaller expedition ships might expect.

There are other, smaller touches too: Alaskan-themed artworks hangs as banners from the ship's Piazza atrium, and gift shops offer plenty of Alaskan souvenirs -- most of which are heavily discounted on our end-of-season cruise.

Riding the Rails In Skagway

Then, there are the shore excursions. You can see Alaska without partaking in one, but you're missing out on some bucket-list opportunities if you do.

My favorite excursion is riding Skagway's narrow-gauge White Pass & Yukon Route railroad. Once thought to be impossible to build, the century-old rail network runs as far as British Columbia, but on our trip today only went as far as Mile 14 due to bridge work on the tracks ahead.

If the pandemic has taught me anything, it's that you should do the things you want to do while on shore. There are no guarantees anymore about when, or if, you'll be back.

The train was exactly as I remembered it: often dramatic, always scenic. The railroad has added some swanky new diesel engines in the off-season, along with refurbished passenger rail cars.

The day was, perhaps, best summed up by our White Pass tour guide, Mary. As she came through the car, the four-year veteran of the WP&YR stopped to address passengers who had come along for the ride.

"I want to thank you all for coming here today," she said, her eyes glistening perceptibly. "Not just on this tour, but also for coming to Alaska aboard a cruise ship."

"I got my job back because of you. I love this job; it's the best job I've ever had, and I'm so excited to be back here again."