You may also like
Dismiss
7 Jaw-Dropping Cruise Ship Bathrooms
The Truth About Solo Cruise Cabins
Which Cruise Can You Book for $500 a Day?
10 Great Tips to Help You Relax on Your Cruise
10 Things to Do on Queen Mary 2
Cunard's Queen Mary 2 Kennels and How to Book Them for Your Next Cruise
Princess Grill and Queens Grill on Cunard Line (Plus Menus)
7 Things to Know About the Cheapest Luxury Cruise Cabins
MSC Cruises FAQ
Short Cruises on Queen Elizabeth: 10 Things You Need to Know 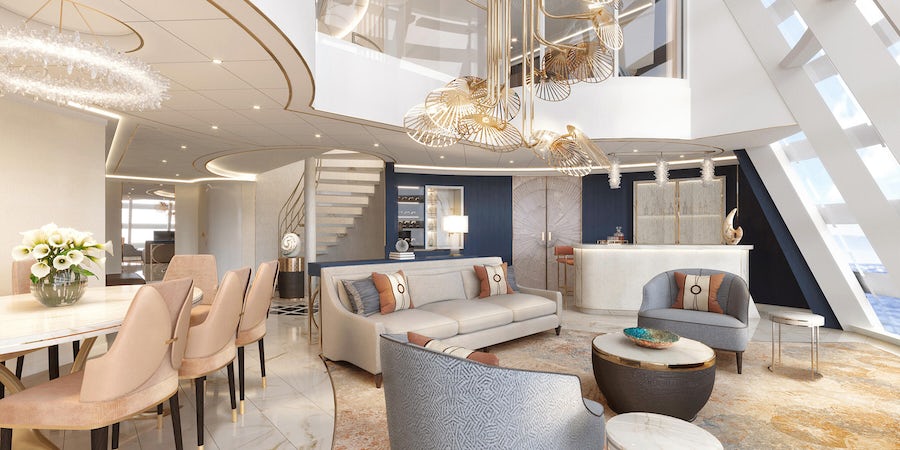 On today's modern cruise ships, most accommodations slot nicely into four predetermined categories: insides, ocean views, balconies and suites. There is always some variation in shape, size and location, but more often than not cabins within each category will be largely identical to one another -- with the possible exception of suites, which do have a little more built-in "uniqueness" by default.

But buried deep down on the deck plans of many cruise ships are some interesting and one-of-a-kind cabin choices just waiting to be discovered -- if you know where to look.

Here are some of Cruise Critic's favorite fun and funky cruise ship cabins you might want to try out on your next sailing.

Cunard Line's grand modern-day ocean liner Queen Mary 2 boasts some of the most unusual cabins at sea, from comfortable insides to sprawling two-level Grand Duplex suites with commanding views of the stern. Two Queen's Grill suites at the front of the ship even boast private elevator access.

But the one that takes the cake for us as being the most surprising accommodation onboard are the Atrium View Interior cabins.

Categorized as category HB and found on decks 5 and 6 midship, there are just 12 of these rooms available onboard Queen Mary 2, all of which are largely hidden on the Cunard website -- unless you find them available in the booking engine under the Inside Stateroom category.

At 159 square feet, they are slightly larger than the average inside stateroom onboard Queen Mary 2 and offer views looking out over the Grand Atrium and the massive bronze relief sculpture of Queen Mary 2 created by artist John McKenna. Rooms offer attractive horizontal blinds instead of curtains for privacy at night and make for an interesting way to cross the Atlantic.

Keeping with the unique inside vibe are Norwegian Cruise Line's Studio accommodations. First introduced aboard Norwegian Epic in 2010, these cabins are designed for the solo traveler. Snug but oh-so-funky, they can be found on every modern Norwegian Cruise Line vessel launched since 2010 and have even been retrofitted onto a few older vessels, as well.

What makes these cabins cool is the serious bragging rights that come along with them. Norwegian took a page from the suite playbook when it designed these, granting studio cabins their own private keycard-access-only corridor away from the hubbub of the rest of the ship, not to mention the private Studio Lounge that is accessible only to passengers traveling in these accommodations.

We've heard, anecdotally, that the rooms -- which sell out at breakneck pace on some sailings -- are so popular that friends who would normally travel together will even book their own cabins just to be part of this hip space.

While the price can be higher for these than a standard inside stateroom with more space, there's no denying the coolness factor of these trendsetting single-occupancy rooms.

Starting with Zuiderdam (the first of the Vista Class that debuted in 2002), each successive Holland America Line ship has offered these aft-facing staterooms on the extreme corners at the stern of each of the upper accommodations decks.

The trick is, these rooms are just lumped under the "Neptune Suite" category. True, you can't go wrong with any Neptune Suite -- the amenities, dual-vanity bathrooms and extra living space are to-die-for -- but choosing an aft-facing cabin with a wraparound balcony makes hosting impromptu gatherings with friends and family a breeze, and the location all the way aft means noise is rarely heard in the corridors outside.

The only caveat is that these aft-corner suites sell out fast, so it's best to snap one up the second you see it.

Carnival has always been known for having some of the largest standard cabin accommodations in the cruise industry, but uniqueness among cabin grades hasn't historically been one of the line's strong suits.

That changed when Carnival debuted its Havana Club cabins and related indoor and outdoor venues onboard Carnival Vista in 2016. These Cuban-themed staterooms offered plenty of grades ranging from insides to full-blown Havana Cabanas that included their own private section of the ship's promenade deck, cordoned off like a front porch.

The real perk for booking these rooms, besides the cool decor (arguably the nicest Carnival has designed to-date) is the private access to the aft-facing pool deck area set aside exclusively for Havana Club cabin patrons until 7 p.m. each evening, when the rest of the ship's general population can go for a dip.

Introduced in 1999 aboard the then first-in-class Voyager of the Seas, Royal Caribbean's Promenade Cabins draw inspiration from several Baltic ferries that offered this style of accommodation in the early 1990s. Royal Caribbean takes these rooms to the next level, though, by having them overlook the ship's Promenade (sort of a horizontal atrium spanning four decks) where performances are held with clockwork regularity.

The downside? These rooms aren't for those who turn in early; the thudding heavy bass notes from the performances filter easily into the rooms, and most will use their bay window and adjacent love seat to take in the performance from a higher vantage point.

On the plus side, these rooms are often significantly less expensive than an oceanview stateroom, while still giving passengers a desirable view of something -- even if that isn't the sea itself.

Chalk this one up to what we feel is the coolest suite at sea.

When Disney Cruise Line debuted its brand-new Disney Wish in June 2022, it offered one of cruising's most unique accommodations -- a lavish suite inset within one of the ship's two iconic red funnels.

The two-story suite -- themed after the movie "Moana" -- spans nearly 2,000 square feet and is inset into the ship's forward (faux) funnel. Adorned by a two-deck high wall of glass, the suite will offer four-and-a-half bathrooms, a dining area, a pantry and bar, two main bedrooms, a children's room with bunk beds that's so cool the grownups will want to sleep there, and a library that can additionally convert into a bedroom. It doesn't hurt that the room also has marbled bathrooms adorned with Bulgari toiletries, plush robes, and giant soaker tubs, either.

Located on decks 14 and 15, the suite will be accessed by a private elevator car from decks 10 and 12 (or s special staircase inset into the base of the funnel) and will include the services of a personal concierge team.

Of course, all this luxury comes with a pretty grand price tag. Disney isn't known for being an economy cruise line, so prepare to shell out some cold hard cash for this once-in-a-lifetime experience.