You may also like
Dismiss
Silversea Venetian Society Cruise Loyalty Program
10 Reasons to Take a Cruise over a Land Holiday
Best Hashtags to Use on Your Cruise Vacation
Top 10 Pacific Explorer Tips
Can I Play Bridge on a Cruise?
8 Reasons To Do Long Cruises with Holland America Line
8 Exhilarating Shore Excursions
Club Orange, Holland America's Priority Program
Carnival Cruise FAQ 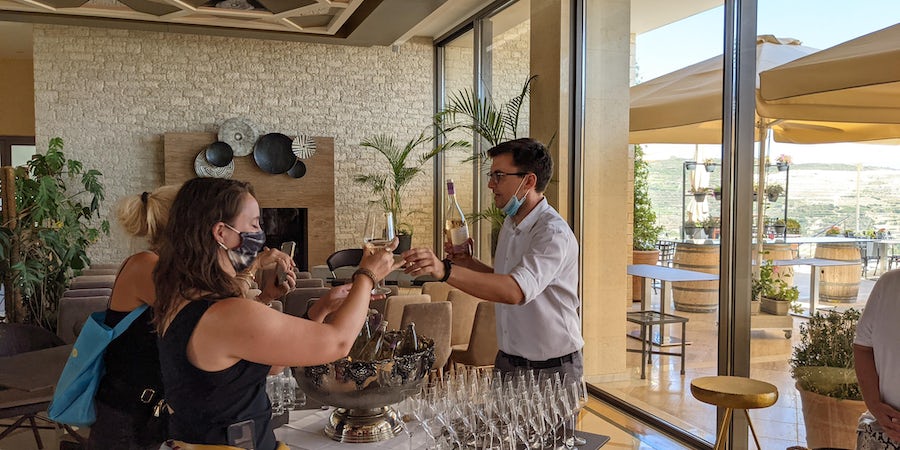 What is S.A.L.T. on a Silversea Cruise?

SALT Wine tasting Silver Moon (Photo: Colleen McDaniel)
Colleen McDaniel
Editor-In-Chief
If you're considering a Silversea cruise, you might have heard the term "S.A.L.T." when researching dining or shore tours. But what exactly is S.A.L.T.?

On the surface, it's pretty straightforward: S.A.L.T. stands for Sea And Land Taste. It's a program aimed at giving Silversea passengers access to true local flavors and approaches to food based around their itinerary and ports of call. But the program itself is far more robust and complex than any simple acronym could represent.

S.A.L.T. is a differentiator: If food and culture matter to you, it could be the program that persuades you to pick Silversea Cruises.

A Brief History of S.A.L.T.

The S.A.L.T. concept is all about immersion into food and culture. It's not just about good food (and the food is REALLY good); it's about telling the stories and histories behind the cuisine of a region -- as well as about the people who grow it, their passion and the role food plays in their lives.

It's a passion project for Silversea chief commercial officer Barbara Muckermann, who has been touting the program since it was a germ of an idea, first revealed to the world as a concept in 2019. (Cruise Critic had the opportunity to get a sneak peek of the project on a trip to Asia in 2019.) The company tapped Adam Sachs, former editor-in-chief for Saveur magazine, to direct the programming. When it comes to food and food discovery, it's tough to think of many who might do it better than Sachs. He's a big deal.

Silversea embarked on a journey aimed at identifying what the program would look like, who would participate and what the venues would be onboard and ashore.

The result, after countless discussions and concepts -- and despite a global pandemic -- finally made its debut, on Silver Moon, in summer 2021.

SA.L.T. touches virtually all pieces of the cruise experience, but it does so subtly, so that if you want to fully embrace every aspect of the program, you can. But it also can play in the background of your voyage, delivering Silversea's trademark understated approach that allows guests to enjoy without feeling like any activity is in your face.

Onboard Silver Moon, you'll find three spaces dedicated to S.A.L.T.: S.A.L.T. Kitchen, S.A.L.T. Bar and S.A.L.T. Lab. All three are located on Deck 4, so there's some cohesiveness to the experience.

S.A.L.T. Kitchen is the restaurant. Here, you'll find a menu dedicated to the region in which the ship sails. For example, if you're sailing a Mediterranean cruise that visits Greece and Cyprus, you'll find two pages of menu options that are the same every night of your voyage, offering some traditional and upgraded takes on food typical to the Eastern Mediterranean. (Think mezze plates, tomatoes galore and raw or cured seafood, along with baklava.)

Each day, though, there is a rotating menu specific to the port you are visiting. So, if you've spent the day in Syros, an appetizer might be aeopita, a fisherman's flatbread topped with swordfish, while an entree could be choirino kydonato, a quince and braised pork dish.

The concept of S.A.L.T. Kitchen makes local and hyperlocal food approachable for all passengers, and it offers enough variety that you could dine there every night without eating the same thing twice. You'll also learn more about the food from the areas you're visiting.

S.A.L.T. Bar is a small space adjacent to the Kitchen. Here, skilled bartenders create craft cocktails using local spirits and ingredients. It's a great place to sample that floral Greek gin or try a craft beer from the region you're sailing. It's also about flair; the bartenders here have mad skills when it comes to creativity. Expect to see a smoke gun or bubble-topped concoction. Guests tend to visit before or after dinner in S.A.L.T. Kitchen.

Finally, S.A.L.T. Lab is the ship's test kitchen, giving passengers a chance to prep dishes that they might see in the ports they visit. Chefs and guest instructors (cookbook authors and renowned chefs) lead the sessions, which involve some chopping and mixing, but nothing too onerous thanks to the pre-cut and portioned ingredients sitting at each cooking station. What sets this apart from other on-ship cooking classes is the tie-in to the culture and history. A session on mezze, for example, will include a discussion on why this style of shared eating over many hours has developed in Cyprus. Guests will learn about the importance of the staple ingredients, find out where they might buy them at home and leave with recipes so they can replicate favorites in their own kitchens.

Outside of the dedicated spaces for S.A.L.T., passengers can expect plenty of lectures (clearly marked as S.A.L.T. in the daily program) on food, wine and spirits. These tend to take place in the Venetian Lounge, which is large enough to accommodate big groups. It also has a stage and overhead camera for live demonstrations. Sessions tend to be led by guest lecturers who have strong ties to a particular type of cuisine or region. A wine owner at a small vineyard in Italy, for example, will lead a session talking about their passion for wine and why they got into it. What's appealing is that these aren't wine-tasting sessions; many Silversea passengers probably have attended plenty of tastings in their lifetimes. It's about the passion and the history, and it brings those concepts closer to the guests. S.A.L.T. is about storytelling.

Silversea has also developed a number of S.A.L.T.-themed tours ashore. While these aren't available in every port, you'll find several options on any cruise itinerary. These excursions have been curated by the S.A.L.T. team, including Sachs, who was hands-on in his approach to picking the right partners.

The premium shore tours, which come with a fee, might have guests walking the fields of an organic farm hearing tales of how it grew from a single olive tree to a fertile, multi-acre business. Or maybe passengers will try their hands at making cheese in Mykonos, all while learning what makes the cheesemaking style distinct and important to the region.

Most tours are at least half-day ventures, and all include lots of eating and drinking, if you're so inclined. Space is relatively limited for the tours, which are small by nature. As the program continues to develop, the tours, too, will progress and expand.

The S.A.L.T. tours might not appeal to everyone; they could include some physical requirements like walking over uneven cobblestones, through steamy fields and up and down stairs to reach hidden gems. But they consistently deliver the stories and experiences guests are sure to remember.

Silver Moon is the first and only ship to offer the fully integrated S.A.L.T. experience, with S.A.L.T. Kitchen, S.A.L.T. Bar and S.A.L.T. Lab.

Silver Dawn, which will debut in November 2021, will also offer the complete S.A.L.T. program. If the nascent program is a hit with passengers, it could be retrofitted onto two ships; only Silver Muse and Silver Spirit are large enough to accommodate the full experience.