You may also like
Dismiss
15 Things That Drive You Nuts on a Cruise and How to Be Zen About Them
Can I Cruise While Pregnant? What You Need to Know
Norwegian Cruise Line Internet Packages and Prices
12 Bad Decisions That Could Ruin Your Cruise
10 Things to Do on Queen Mary 2
9 Waterproof Items You Need for Your Next Cruise
MSC Cruises FAQ
Onboard Health and Safety Essentials to Pack for Your Next Cruise
Why Germ-Zapping Robots and AI Technology Could Be the Future For Cruise Ships
How To Cope With Cruising's Pause? Plan Far, Far Ahead 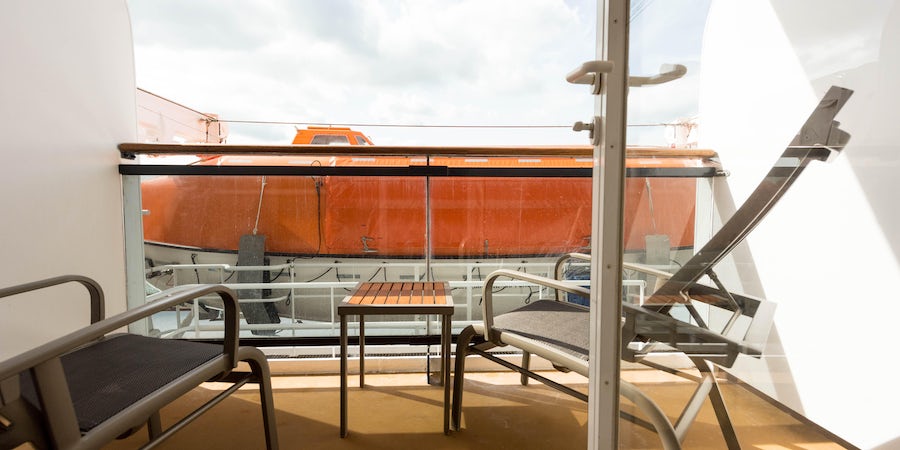 The Britannia Club Balcony Cabin (Obstructed View) on Queen Mary 2 (QM2)
Fran Golden
Contributor
Just like there are bad seats on airlines based on location (middle seats!), there is such a thing as a bad cruise ship cabin. Get stuck with one of the worst cabin locations on a cruise ship and your sleeping and alone time may be interrupted by noise, smells and other annoyances.

The good news is just like you may choose whether you want an inside, oceanview or balcony cabin or a suite, in most cases you also get to choose your cabin location when you make your booking (unless you go with a super cheap "guaranteed" category fare where the cruise line decides where you will be staying).

To avoid making a mistake when picking your cabin location, it makes sense to study your cruise ship’s deck plans before making your cabin choice. Look at what is above, beside or below your selected cabin location -- and remember, deck plans don't always line up on page the way they do in real life. Match the elevator banks and stairwells on each deck to get a better idea of where your cabin is, spatially.

Or better yet, work with an experienced travel advisor who has access to information and knowledge about which cabin locations are the best -- and the worst.

Let our pain be your gain. Here are our recommendations of cabin locations to avoid.

Especially if you are a light sleeper, you don’t want to hear pulsing music into the wee hours. Don’t book near or under the disco and avoid other entertainment areas -- cabins near the theater, for instance, may experience some sound-bleed, particularly thumping from heavy bass notes. Ditto for the ship’s atrium if it is used as an entertainment hub for music and performances.

Other areas to avoid for those craving silence include cabins directly under the Lido deck, because your nap may be interrupted by the poolside band playing tunes, late-night deck parties, or the sound of scraping as passengers move deck chairs to their desired positions.

That fancy suite might be up top of the ship at the bow, but if you are prone to seasickness it’s best to avoid both forward-facing cabins and higher decks, because the ship's movement tends to be more pronounced there. Cabins in the center of the ship are more stable for those who don't want to feel as much motion on the ocean.

In the bow of the ship is the anchor, which you want to avoid being close to because when it is dropped you are guaranteed to hear very loud noises in the very wee hours any time you're in a port that requires tendering and anchoring offshore. These cabins tend to be all the way forward on lower decks, but expect to hear some noise in most extreme-bow cabins.

Ah, it’s a glorious day! You open your curtains and look outside to admire the view of the cloudless sky and sea, but instead find yourself staring at a big orange lifeboat. Don’t let this be you. Choose a cabin without obstructed views, unless you value the reduced price these cabins come with. Pro tip: those lifeboats need maintenance all the time. Expect to see the odd worker passing by your window every now and then.

5. Close to the Engine Room and the Galleys

While it's less of a problem on today's modern megaships, don’t book a cabin near the engine room unless you happen to like the smell of marine diesel and occasional vibrations. If you are sensitive to smell, avoid too booking near the restaurant galleys, which are usually blocked off as large grey technical spaces between dining rooms on deck plans. French fries smell great when you are eating them, but not so much when batch after batch is cooked.

6. Near Elevator Landings and Stairwells

People tend to talk on elevator landings and in stairwells while heading back to their cabins, even late at night. Maybe especially late at night. So unless you want to hear all about Mary and Joe’s day and plans for tomorrow, avoid booking cabins near these areas. Your sensitive ears may also be annoyed by the gentle pinging of elevator buttons.

7. Under the Jogging Track or Near Children’s Playrooms

Noise is an issue if you are directly under the jogging track or promenade deck -- unless you like awakening to a rigorous thump, thump thumping -- and kids are kids and make noise. Also avoid booking directly under the sports court and other fitness areas that could be subject to excessive noise.

If you are very sensitive to noise, don’t book a cabin with a connecting door option because through the doors (which are not as heavy as doors to the corridor) you are more likely to hear the folks next door -- whether you know them or not. Connecting cabins are typically indicated with a little symbol on deck plans in between rooms that adjoin.

Among the possible horrors here is getting a cabin next to the vacuum toilet control system, which means you’ll hear constant flushing. Door slamming as the crew goes about their work may be another annoyance.

For those sensitive to the smell of cigarettes and cigars, avoid areas where smoking is allowed. On some ships, this means not staying near the casino.