You may also like
Dismiss
Celebrity Cruises' Jet Set Sail Package
Monaco Grand Prix Cruise Tips
How To Cope With Cruising's Pause? Plan Far, Far Ahead
Photos From MSC Cruises' Return to Sailing in the Mediterranean
Our Top Tips To Prepare For a Cruise in the COVID-Era
Overseas Cruise Checklist: What To Know Before You Go
Just Back From Viking Venus: Brand-New Cruise Ship, Brand-New Homeport
Cruise Quarantine 101: What You Need To Know Before You Sail During a COVID-19 Omicron or Delta Surge
Post-Covid Cruising: How Close to Normal is Cruising Right Now?
COVID-19 Testing Anxiety: The Fear is Real, and It's Hurting Cruises 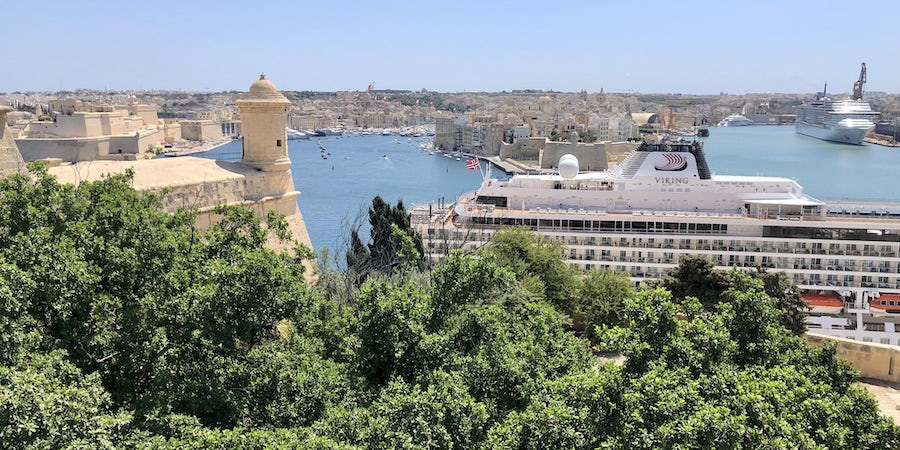 That's the question I heard the most as I prepared for my first European trip since the global health pandemic began last spring. While ocean cruises have been running in the Mediterranean for a few months and river cruises have started inland, the rise of the Delta variant has deterred immediate international travel for late summer and early fall 2021, at least in my circle.

Initially I was concerned. At the end of July, I sailed on Carnival's Mardi Gras, a brand-new ship where I loved almost everything -- except the 70 percent capacity that filled the ship to almost "normal" levels. It was the week before the line had instituted its mask requirement, and with COVID-19 breakthroughs suddenly becoming more common, I saw the energetic crowds -- the July 31 sailing had 4,200 passengers -- and packed elevators as a negative (and indeed, I did pick up the worst cold I've had in a year from the sailing, although luckily rounds of both PCR and antigen tests proved it wasn't coronavirus).

So what made me decide to go ahead with my current trip, an 11-day cruise on a brand-new itinerary to Malta onboard Viking's brand-new Viking Venus? It's simple: Viking's strict health and safety protocols, which include vaccine requirements for every passenger, masking rules and daily testing. What had seemed like overkill on Viking's first sailings back in May and June now seems prudent -- and while the trip has just begun, I feel as secure as you can be when you travel these days.

Here are some of the specific things that Viking is doing that have instilled confidence -- as well as a few things that I did on my end to make the travel process easier.

If you're traveling long distances in the pandemic-era, you're bound to run into red tape. Almost every country in Europe has different requirements, and even the most organized might find it hard to stay on top of everything.

What I really liked is that Viking sent out several notes specifically outlining a timetable of requirements before the cruise. I knew that I needed to fill out a Verifly application on my phone for both Viking and the country of Malta about 10 days before my cruise, for example. Malta had a separate form too, which you filled out online and then printed. Finally, Viking provided a list of what specific documents you should carry with you during travel -- and they even reminded us to have a KN95 mask for our Lufthansa charter flight, as other types of masks are not accepted.

Viking is currently sailing from homeports in Iceland, Bermuda and Malta under a clear vaccination mandate. All passengers on Viking ships must be fully vaccinated against COVID-19, no exceptions.

Granted, Viking can do this because it's always been an adults-only line. Viking doesn't have to worry about alienating families with young children, simply because that's never been part of their demographic. While a fully-vaccinated ship won't stop breakthrough infections, it's at least a base layer of protection that's unequaled in the travel industry.

Vaccinated travelers do not need to take a COVID-19 test to enter Malta. Viking still recommended that we get one. Why? Malta, like many European countries, has a fairly rigorous 14-day quarantine if you test positive. By encouraging people to get a PCR test before they leave home, Viking is doing what it can to avoid the ugly scenario of testing positive on the ship.

That's not to say that a pre-cruise test is foolproof. The case of four family members who was quarantined in a Malta hotel for two weeks after one person tested positive shook one of the largest Viking Facebook groups recently. Those quarantined included a daughter and her husband who remained negative after numerous tests, but were taken off the ship because they were close contacts.

Being forced into a quarantine hotel was a big fear of mine before the trip. It could still happen -- I know that. But taking that last PCR test before the trip and knowing it was negative provided some security.

Malta has been a popular Mediterranean cruise stop for decades. Viking is the first cruise line to make it a homeport. The location, full of summer sunshine and oodles of history, is a natural one for Viking's typical passenger, life-long learners who dig into lectures and walking tours. The itinerary also visits ports in Montenegro and Croatia.

The biggest problem in choosing Malta as a home port was its airlift, we've been told. There simply aren't a lot of flights between major U.S. homeports and the island. Viking solved this by developing a special charter flight agreement with Lufthansa. The Newark-Valletta flight only coincides with the embarkation and debarkation dates for the line's two ships.

Our departure coincided with Tropical Storm Henri, and if we were on a regular flight, it could have been canceled. Because everyone onboard was heading to Viking Venus, however, the crew worked extra hard to get us off the ground, even resorting to cleaning the plane themselves when airport sanitation didn't show up. Our captain even made a few jokes about cruise ships and made sure to point out Viking Venus in the harbor as we began our descent.

Viking is trying to encourage social distancing when it can. Our ship of 930 passengers is sailing about half full, which makes it easier to enjoy more peronal space onboard. We're still seeing our fellow passengers crowd into elevators -- at least they're wearing masks. Groups larger than six are not encouraged in restaurants or lounges.

Where social distancing really worked was at embarkation. Viking picked people up at the airport in a series of small groups that were staggered. That made the process at the Valletta cruise port among the smoothest that I've seen this season. Like other cruise lines, Viking has gone to a more individualized muster drill, avoiding large groups. Before you know it, you're in your cabin and ready to… spit? Read on.

Viking's ocean ships have the most comprehensive onboard COVID-19 testing around, with labs onboard for processing saliva-based tests. That's right, you spit – into a test tube, every day.

When this process was first announced in early 2021, it seemed too much. With the protection given from vaccines, why would you need daily testing? And is spitting into a tube really part of the Viking upscale experience?

That was before the Delta variant came along, though. Now daily testing, coupled with a mandatory health survey through the app, seems smart. With testing, Viking can easily isolate a single positive case, before it spreads.

Close contacts are monitored through a wearable tracing device. It's on a lanyard so you can put it around your neck. Or you can be subtler and stash it in your bag or pocket; the device is small enough that it isn't obtrusive.

The spitting is still gross. No getting around that. You're supposed to produce two ml in the morning before you leave your cabin, which is more spit than you might think. And it takes some practice to actually get your saliva into the tiny tube.

Still, I'd rather spit and be safe, than risk an onboard outbreak.

Back in June when it seemed like all you needed was a vaccine to elude COVID-19, I happily abandoned masks on my first few cruises. Now with Delta, walking around indoors in a group without a mask seems foolhardy.

Viking politely asks guests to wear masks in all indoor public areas of the ship when they are not eating and drinking. So far, most people seem to comply, which is expected for a line that gained mass exposure through its advertisements on PBS, NPR and 60 Minutes. Everyone knows the drill at this point.

Because Malta and the other countries we're visiting have a CDC Level 4 warning, Viking is keeping us in shore excursion "bubbles," where we have to stay with others from the ship and not go out independently. I was expecting this to be a drag, but the excursions provided in Valletta were a nice mix.

Our guide did tell us that we needed to wear masks while walking around outdoors in Valletta, which seemed a bit beyond what the locals and other tourists were doing. This is one area where it would be good to have some clarity. No one wants to wear a mask outside if it's not required.

In Case of Quarantine… Travel Insurance

Nothing is foolproof these days -- even with vigorous protocols, asymptomatic COVID-19 cases can slip through on a ship, as they do at parties, restaurants and resorts on land. And quarantine does remain a concern when traveling internationally,

To protect yourself, buy a travel insurance policy that outlines exactly what would happen if you become sick or quarantined. While Viking has paid the hotel for several cruisers who have been quarantined, it does not cover food or other related costs. You might also want to pack enough medications to cover yourself if you wind up testing positive and have an unexpected two-week extension of your holiday.

Is All This Worth It?

The question many travelers have may be, is going an international cruise worth all these extra steps? That's up to each person. From what we've heard from our fellow Viking Venus passengers, many of them are simply tired of watching more months go by without getting out and exploring the world. They understand the risks, trust the precautions and are sensible enough to have some contingency plans.

My answer to why came on night one, when a lush orange full moon rose above the limestone fortifications of the Valletta harbor. We tried to capture it with our iPhones from our table at the Aquavit Terrace. But some moments can't be caught. You just have to be there.