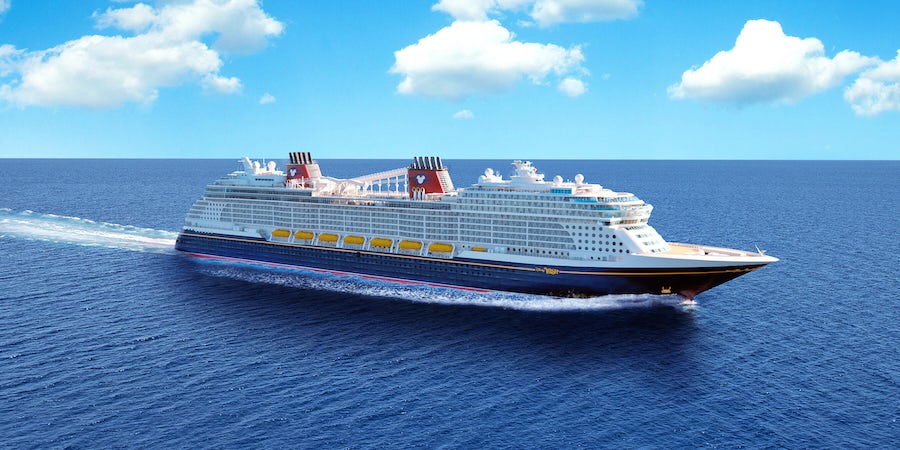 Disney Cruise Line's newest ship, Disney Wish, won’t set sail on its maiden voyage until June 2022, but Disney’s team of Imagineers are hard at work on some big new surprises to delight passengers when the line's new flagship launches next year.

Cruise Critic got a sneak peek of some of these never-before-seen innovations at sea destined for Disney Wish earlier this month, including the opportunity to test out some brand new technologies that will soon find their home aboard the fifth ship in the Disney Cruise Line fleet, and the first of the cruise line’s new Triton Class. (See also: Disney Uncharted Adventure).

Here’s a preview of some of the show-stopping attractions that are in store for cruise passengers sailing aboard Disney Wish next year.

Designed to reflect the Lucasfilm franchise’s space age aesthetic, the bar is designed with high-end finishes on the tables and chairs, thematic waitstaff uniforms, a holographic column, and various jars filled with oddities and space creatures collected across the galaxy. Passengers will even find touches like custom-created liquor bottles to truly transport guests to “a long time ago, in a galaxy far, far away.”

“You’ll never walk in and see a bottle of Jack Daniels. Those hardcore Star Wars fans are going to see the level of detail they’d expect,” said Nick Snyder, concept designer with Walt Disney Imagineering, who worked on a team from Lucasfilm to ensure the authenticity of the space.

Nowhere is this carried out more impressively than the oversized and tack-sharp theatrical screens mounted behind the bar that play Star Wars archival space footage, giving guests the illusion of traveling through the galaxy while aboard the Disney Wish, with plenty of visual “Easter eggs” for sharp-eyed fans.

Though the lounge is intended for adults, Imagineers say children will also be welcome to accompany their families, with nonalcoholic cocktails served during the day.

Though Disney cruisers may be familiar with the AquaDuck water coaster available onboard Disney Dream and Disney Fantasy), Disney Wish will debut Disney’s first veritable attraction at sea: the AquaMouse.

Like the AquaDuck, passengers will sit in a double raft and be transported via conveyor belt through a water tube slide, ending in a lazy river.

The AquaMouse amps up the storytelling by featuring two original short films that follow Mickey and Minnie and their own port adventure company called Port Misadventures. The films are shown in seven-second vignettes through a series of nine magic portholes interspersed along the ride. Lighting, audio, and surprising jets of water blasts will ensure passengers are laughing and soaked from the very beginning.

The films will rotate throughout the cruise, so every ride is different. The Imagineers say measures are being taken to increase ride capacity and reduce line wait times. Passengers must be at least 42 inches (106 centimeters) tall in order to ride.

Cruise Critic was able to get a glimpse of the technology in store at the Avengers-themed cinematic dining adventure. A timed dinner service will unveil technology from the libraries of Marvel’s Iron Man and Ant Man and the Wasp—specifically, Pym Technologies’ Quantum Core, a fascinating piece of tabletop gadgetry which allows guests to experiment with shrinking and growing objects (i.e. dessert) with a push of the button.

A story unfolds while guests dine in this space with live theatrical action, as well as on-screen characters including humorous mishaps along the way. During the final course, stay tuned for a big finale when super villain Ultron attempts to take over the restaurant, and families are recruited to help save the day.

Disney Wish will continue Disney Cruise Line's innovative rotational dining concept, so passengers can experience each of the three main dining rooms at least once per cruise.

Kids can carry on with their superhero training in the upgraded onboard Oceaneer Club, which is divided into five unique Disney and Pixar-inspired story spaces. One of the coolest aspects is your kiddo’s grand entrance: literally sliding down a slide one floor above this space from the atrium into the kids’ area.

For the first time ever, kids can try out life as a Disney Imagineer in the Imagineering Lab, working in a laboratory space that allows them to design and build their own roller coaster, and then “ride” the coaster inside a vessel that allows them to feel the vibration of their tracks along the way while they watch the ride unfold on screen in front of them.

A Fairytale Hall will include Repunzel’s Art Studio with arts and crafts, Anna and Elsa’s Summer House, with a series of Frozen-themed video games, and Belle’s Library, a new quiet, decompression zone for kids who need a time out from audio/video stimulation.

The popular Marvel Super Hero Academy found on other Disney ships returns onboard Disney Wish, chock full of Avengers-themed technology for guests to test drive (Vibranium from Black Panther’s Wakanda, Pym Technologies from Ant Man and the Wasp, Stark Tech from Iron Man). Visit Mission Training to design your own customized suit and then give it a whirl fighting off enemies and racking up points that accumulate throughout your cruise.

Because we know readers will ask: There’s a rumor that adults might finally get their long-awaited chance to try out these spaces at select times during voyages, too.

Disney Wish debuts in June, 2022. Its inaugural season is already available for booking.