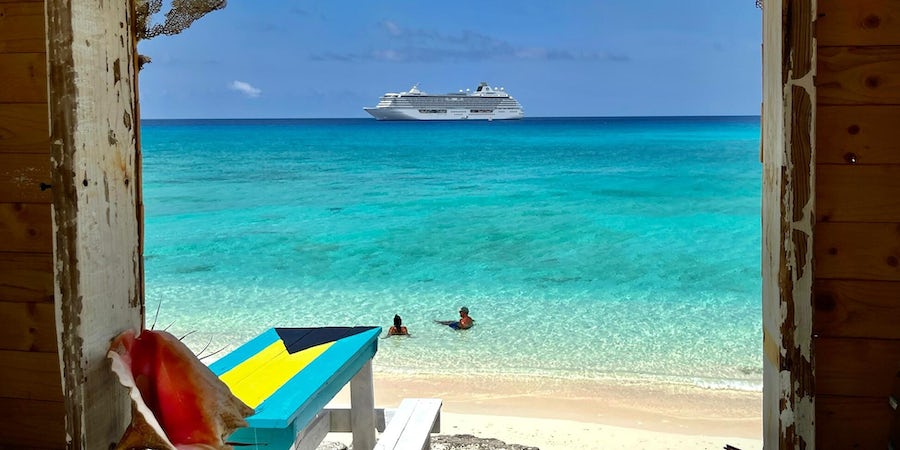 The Bahamas As You've Never Seen It, From A Luxury Crystal Cruise

Away from the bustle of Nassau, the Out Islands of The Bahamas are awash in low-key, no-hustle experiences. And for now, anyway, you don’t need a private yacht to sample their delights.

The upshot: Passengers who venture ashore – whether on ship-organized excursions or on their own – will find empty, pristine beaches and welcoming locals, plus a few truly unusual opportunities, like swimming with pigs and snorkeling above the world’s second-deepest underwater cavern.

The caveat: These islands are mostly undeveloped and lack infrastructure. If you expect first-class facilities, transportation, and guides, stay onboard, or choose a different itinerary.

Our first port of call after departing Nassau was Bimini, another embarkation point option.

Located just 50 miles off the Florida coast and sporting a new deep-water pier, the island gets a lot more tourist action than the other places we’d visit.

A complimentary tram service ferried passengers from the pier to Resorts World Bimini (owned by Crystal’s parent company), where facilities include a beach club, hotel and casino.

Beach chairs and umbrellas at the club are gratis for cruisers, but food and beverages are not. Bring bottled water from the ship to avoid the $5 tariff at the club.

Paid excursions include guided kayak, bike and jet-ski tours, and snorkeling while watching scuba divers feed reef sharks below. And, on an island dubbed the Sport Fishing Capital of the World, there is, of course, an opportunity to angle for bonefish, blue marlin, snapper and more.

Bimini is also known for its dive locales, including the SS Sapona shipwreck and a half-mile-long underwater trail of stones known as the Bimini Road.

The island has a rich, if checkered, past. It was a haunt for pirates in the 17th and 18th centuries. U.S. Prohibition in the 1920s made it a haven for rumrunners. It garnered literary cred as a 1930s hangout for novelist Ernest Hemingway. His stories, “The Old Man and the Sea” and “Islands in the Stream” drew on his experiences here. And Martin Luther King, Jr. wrote his 1964 Nobel Prize acceptance speech while visiting.

I rode the tram to Fisherman’s Village at Bimini’s north end, and rented a bike from a vendor ($20) for an afternoon of independent exploration.

You can’t get lost. A single narrow lane stretches from one end to the other. Golf carts (mostly rented by visitors) outnumbered cars.

Dot-on-the-map settlements like Bailey Town and Porgy Bay lead south to the only slightly larger Alice Town. There, vendors in the straw market displayed the usual souvenir T-shirts and straw hats. Next door, the exuberant paint job on the Pepto Bismol-pink Customs House made me smile.  Across the way, Bimini Museum, housed in a restored 1921 government building, was closed (it was Sunday), but placards outside tell its story. Elsewhere along the road, interpretive signs focus on bygone landmarks, like the Bimini Bay Rod and Gun Club, a 1920 hotel/casino that was The Bahamas’ largest in its day.

The Exumas consist of 365 tiny cays, but as the name suggests, Great Exuma, is the largest. It’s awash in history: British Loyalists, with slaves in tow, settled here after the American Revolution. The capital, George Town, dates to 1793.

Besides meandering through historic settlements via hired car, Crystal offers outings that range from a free beach day, to ATV tours, to a harbor sail. A free shuttle takes passengers to Farmer’s Hill Beach, where vendors from George Town market traditional handicrafts, along with snorkel rentals and conch salad, a Bahamian staple.

Given time constraints, I opted for what many Great Exuma visitors choose: Swimming with pigs! It’s so popular, the cruise line offers four tours – including one that throws in iguanas and sharks, for good measure.

Indeed, it’s a not-to-be-missed experience that has become emblematic of the island. And to hear it from Justin Lightbourn, one of the proprietors of the family-run Exuma Water Sports, it was all a happy accident.

Accounts vary of how this herd of pigs came to dwell on a deserted one-square-mile cay off the northern tip of Great Exuma. Either they were left there by sailors hoping they’d become a regular food source. Or they’re survivors of a shipwreck. Or, as Lightbourn tells it, the oinkers were deposited there by a farmer whose neighbors complained about what pigs just do naturally: stink.

“We felt bad for them and started feeding them,” said Lightbourn, whose previous top-selling tour was a James Bond-inspired outing that takes in Thunderball Grotto, where scenes from 1965 film were shot.

Social media postings of celebrities swimming with the pigs, including a 2016 turn on The Bachelor, have cemented their star status.

We bottle-fed formula to piglets and had literal fat pigs eating raw carrots out of our hands. One porcine veteran, an arthritic squealer – aptly dubbed “Squealy” by our guides – reveled in the attention, happy as…well, a pig in mud.  Meanwhile, we two-legged swimmers delighted in this not-to-be-forgotten experience.

“Quiet” doesn’t quite do justice to the vibe on San Salvador.

The island’s only resort, a Club Med that drew charter flights, remains closed due to COVID. And the sole cruise ship that once came annually, no longer calls here.

“This size is good. But the bigger ones, no,” she said. “Besides, I think people on the bigger ships are looking for more.”

Maybe. But understated natural attractions abound. San “Sal” boasts five national parks encompassing 21,000 acres. One of them, Graham’s Harbour, is home to 14 of The Bahamas’ 17 nesting sea bird varieties. At Pigeon Creek National Park, tidal mangroves hug the shore.  And the island’s interior is dominated by a series of huge lakes.

But San Salvador’s main claim to fame is as the spot where Christopher Columbus first set foot in the New World. Though exactly where isn’t 100 percent certain. Four monuments around the island pay tribute to the mariner’s historic 1492 landfall.

I enlisted Nat Walker, an 81-year-old island native, to take me on a brief tour in his minivan. We visited a nearby inland lake, where before the island’s airport was built, float planes ferried passengers and goods to San Salvador.

Our ultimate destination was Landfall Park, the island's highest profile homage to Columbus. There we found several commemorative plaques and a giant white cross.

More memorable than the tributes in the park was the lack of crowds on the graceful arc of white sand bordering Long Bay. On the beach, a friendly bartender dispensed ice cold Bahamas-brewed Kalik beer.  On the sound system: island beats.

Serenity was anchored off the Riding Rock Hotel Marina in Cockburn Town, and passengers made the brief trip to shore via tender. Crystal’s shore excursions here include a cycling tour, bird watching, reef snorkeling, deep-sea fishing, a drive around the island’s perimeter via Queen’s Highway, and a lobster picnic.

On the dock, vendors sold jewelry fashioned from delicate sea glass, colorful Bahamian fabric, and conch-shell carvings. Friendly chitchat trumped hard-sell pitches. And the affable proprietor of the Sands Hotel showed me around and invited a few of us to sit awhile on the patio.

A festive mood prevailed as the tender deposited us on the pier at Clarence Town, the main community on this skinny, 96-mile-long island. A seven-piece band played music that made you want to dance. Vendors hawked everything from embroidered tea towels and beach bags to conch salad and rum drinks. And two spanking new shuttles awaited to deliver us gratis to one of two beaches.

Of all the stops on our itinerary, Long Island presented perhaps the greatest challenge, since it has never before had a cruise ship call. Crystal Cruises provided the minibuses that ferried passengers to Dean’s Blue Hole, a 663-foot vertical underwater cave, or, alternately, to a pristine strand of beach 45 minutes away. Chairs and umbrellas were for rent in both spots, but the beaches are mostly commerce-free.

I opted for the closer-in Dean’s Blue Hole, which claims fame as the world’s second-deepest underwater vertical cave. The week before, a Russian competitor had set a new freediving world’s record here by descending to almost 430 feet in 4 minutes, 33 seconds.

I barely broke the surface. But the beauty of Dean’s Blue Hole is its proximity to the shore. You can almost wade to its precipice. Unfortunately, no one was renting snorkeling gear that day, so I made do with a pair of borrowed swim goggles. (It’s worth packing your own gear on an itinerary like this.)

Other than options for private boat charters, the only paid shore excursion is one that combines the blue hole with a guided tour of Hamilton’s Cave, where drawings depict early indigenous Lucayan life.

Back in Clarence Town, I strolled along rutted roads to hilltop Catholic and Anglican churches whose towers define the tiny town’s skyline.  Drivers in a couple of passing cars waved hello. But otherwise, this slice of paradise, for the moment, was mine.