You may also like
Dismiss
Holland America vs. Princess in Alaska
Cruise with Us to Alaska
8 Exhilarating Shore Excursions
Pictures of Norwegian Encore
10 Reasons to Stay in Seattle Before Your Alaska Cruise
Which Alaska 2021 Cruise Ship Is Right For You?
Booked on a Cruise to Alaska? You Might Notice Some New Features in Port
Can You Work From A Cruise Ship? Our Tips for Working Remotely at Sea
What's Happening With the 2022 Alaska Cruise Season?
What's New for the 2022 Alaska Cruise Season? 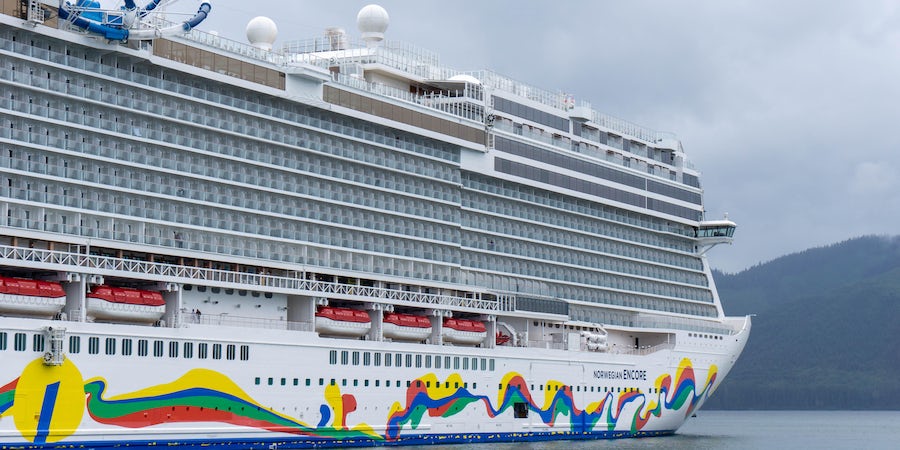 It is the first NCL sailing to resume in the United States, and the first time Norwegian Encore has sailed Alaskan waters since its debut in fall 2019.

But more than that, Norwegian Encore's arrival into Icy Strait Point represents a sort of physical sigh of relief from executives, passengers and locals alike: a sort of reassurance that cruising is indeed back in Alaska.

"Our return to Alaska is a monumental moment for not only NCL but for the state's communities as well," said Harry Sommer, president and CEO of Norwegian Cruise Line, as he took part in dedication ceremonies at Icy Strait Point.

"Our return represents our continued commitment to Alaska and to the well-being of the destinations we visit."

Norwegian Encore was named Cruise Critic's Ship of the Year in 2019, and it's nice to see that its appeal is still apparent two years later. It is a diverse ship, filled with warm and cozy public spaces that offer up distinctive themes and food and beverage menus. Few details have been overlooked, and there is seemingly a space -- and a diversion -- for every taste and preference. There is an onboard go-kart racing track; an Atlantis-themed laser tag course on the aft deck, and a massive Thermal Suite in the Mandara Spa that wraps around the entire stern of the vessel.

The crown jewel, particularly in Alaska, is the ship's Observation Lounge -- a spectacular space that takes up the forward half of Deck 17 lined with floor-to-ceiling windows overlooking the bow, port, and starboard sides of the vessel.

This lounge offers up plenty of intimate seating sections and serving stations that offer up lighter fare for breakfast and lunch. A circular bar is situated all the way forward, bookended by an expansive two-story bank of glass overlooking the ship's bow.

It is a stunning place to while away the day, either wildlife watching, taking in a quiet book, or engaging in afternoon drinks with new friends.

One aspect of Norwegian's onboard product that has never changed is its top-notch entertainment. Passengers onboard can expect to find the superb production Choir of Man, though the much-lauded Kinky Boots is not onboard as of this sailing.

There's also live music throughout the ship, from pub tunes in The Local -- the onboard beer hall with 20 different draft beers and 50 bottled varieties -- to jazz in the Observation Lounge and piano and vocal performances in the Atrium.

Norwegian has made strides over the years to improve its food, to nice success. Meals in Taste and Savor -- two of the ship's three main restaurants -- are classy because the spaces are intimate; a late-evening dinner as we departed Icy Strait Point had me feeling as though I were dining in one of the ship's specialty restaurants.

Speaking of those, the ones I have tried so far -- Los Lobos, American Diner, Q Texas Smokehouse, Food Republic and Le Bistro -- have exceeded expectations. Q Texas Smokehouse wins our informal "Best Cocktail" award for its smoked peach margarita, while Le Bistro (always a favorite) is better than ever with its partnership with Veuve Cliquot and its commanding Deck 17 location.

Printed menus are still available onboard, as are printed Freestyle Daily programs.

On the cocktail front, there are two hidden gems aboard Norwegian Encore: the A-List, a clubby circular bar set in between the entrances to Los Lobos and Cagney's Steakhouse on Deck 8; and the Sail & Sustain Bar. The latter is only available outside on the Deck 8 promenade area known as The Waterfront, and offers up cocktails made with ingredients that would otherwise be thrown out -- old croissants, pineapple, cucumber, etc. There's a "Sail and Sustain" cocktail of the day, every day, making this outdoor location one of the more interesting ideas we've seen on a ship.

I have to admit to having doubts about Norwegian Encore's suitability in Alaska. A go-kart track seems like an odd feature in an area of the world that is known for its widespread liquid sunshine (and particularly now, when no kids are allowed onboard because of NCL's vaccination requirement).

But the sheer amount of window-lined public rooms, restaurants and lounges aboard Norwegian Encore -- not to mention the grand Observation Lounge -- actually make this an ideal vessel for Alaska.

A Number of Firsts

Disembarking in Icy Strait Point came with a surprise: keycards were unnecessary, as facial recognition technology was employed to check passengers on and off the vessel and analyze their temperature as a COVID-19 precaution.

Yet as Cruise Critic found on Norwegian Jade in Greece, Norwegian Cruise Line's app hasn't worked at all while onboard despite having the latest version downloaded and a strong Wi-Fi connection. (It does work great while ashore)

Norwegian Cruise Line is busy developing a number of firsts on-shore, as well. Norwegian Encore became the first vessel to officially inaugurate Icy Strait Point's new Wilderness Landing docking facility, coupled with a new Transporter gondola that runs between the existing Adventure Landing (near the Duck House restaurant and bar), and one that will eventually run up to the Zip Rider in just 10 minutes -- as opposed to the 45-minute commute by bus that currently exists.

The Wilderness Landing pier will be exclusively for the use of Norwegian Cruise Line Holdings' vessels, which include vessels from Norwegian, Oceania and Regent Seven Seas. Other cruise ships will continue tying up at Adventure Landing.

Sommer sees the investment as crucial. "The absence of cruising last year was detrimental to these communities, which lost approximately $1.5 billion," he said. "Our return represents our continued commitment to Alaska and to the well-being of the destinations we visit."

Originally announced in 2019 for the lost 2020 Alaska cruise season, the new Transporter gondola system can move 5,600 people per hour between the two docking locations. Between the two transporter gondolas (the mountainside one running up to the Zip Rider will be ready in 2022) and the new docking facilities, it represents an approximately $80 million investment in Icy Strait Point.

Norwegian Cruise Line Holdings' boss Frank Del Rio even paid for a brand-new statue of a whale that graces the oceanfront boardwalk.

During the port call, the excitement from the residents of Hoonah -- the nearby village that owns Icy Strait Point as part of the Huna Totem Corporation -- was palpable. Two ribbon cuttings were held alongside native Tlingit performances for passengers and media. Passengers flocked to the Transporter and rode it to the historic 1912-built Cannery, now a museum, gift shop and eatery. They took in Zip Rider excursions until high winds in the afternoon called a halt to it, and set out on whale watching tours.

Throughout the day, persistent rainbows continually shone brightly in between pockets of heavy rain. Bright, vibrant and effervescent, these swaths of cheerful color were with us from dawn to dusk in Icy Strait Point.

A good sign for our sailing, the season, and for Alaska.