You may also like
Dismiss
Chef's Table on Carnival Cruise Line
11 Things to Love About Virgin Voyages' Scarlet Lady
All About Adventures by Disney Family River Cruises
The Most Expensive Hotels Near Southampton for a Pre-Cruise Stay
The Beach Club at Bimini: What You Can Expect From Virgin Voyages' Private Experience Ashore
Are Dolphin Tours Humane?
10 Things Single Parents Should Know When Cruising With Their Kids
The Most Exciting Ship Launches in 2020
Why Scenic Eclipse Is the Luxury Cruise Ship for You
New Cruise Ships 2020 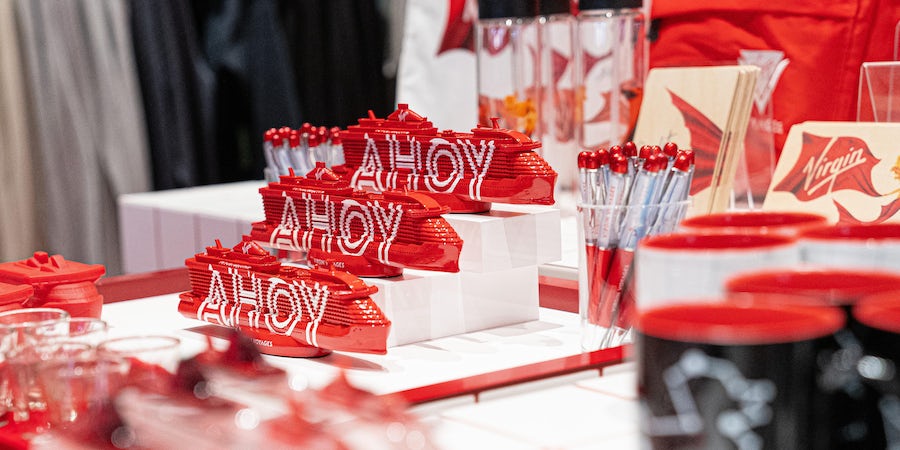 The first time I stepped aboard Virgin Voyages' first cruise ship, Scarlet Lady, for an overnight in Dover in February 2020, let's just say I was confused.

The cabins were oddly configured; the pool was the size of a handkerchief, things that were meant to be new-to-cruise concepts felt like gimmicks. Overall, it looked -- and it just seemed -- to try too hard.

Fast forward 18 months after the ship made its debut, and here we are in Portsmouth about to get back onboard.

It's a sunnier day, which helps as this ship is absolutely designed for warm weather sailing. All the nonsense that annoyed me -- and a lot of others -- back then is still on show, such as the "AHOY" sign at boarding, and the crew calling everyone "sailors" and refusing to use the word "cruise" or "ship." (It's voyage and vessel, to the uninitiated).

But you know what? The moment I step onboard and am greeted by a cheery "Ahoy" by a crew member who seemed deliriously happy to be working, I am kind of smitten. And now that the ship and line is finally able to go on revenue cruises -- after its two U.K. showcases, Virgin Voyages was forced to cancel everything for Scarlet Lady, including its christening -- I'm convinced this ship is a game changer and ready for its Miami close up.

The Ship Is Genuinely Cool

This ship oozes actual cool. You feel like a rock star wandering about with flattering mirrors; crazy corridors studded with bright lights that dazzle and amaze in equal measure; curtains that open automatically as you walk into your cabin.

The best description I can give is it has the look and feel of a W Hotel, right from the reception area, which is a series of pods, rather than a single desk; to the crew, which are all young and good looking and smile a lot. There is soft mauve corridor lighting, as well as mirrored cabins with iPads and electronically controlled blinds and even a welcome "Time to Play" kit (more on that below).

If you are looking for a cruise line comparison, the nearest would be Celebrity Cruises, at least in the Edge Class. Virgin's emphasis on design (Tom Dixon is the hand behind most of the spaces) is as strong as that of Celebrity's, with the difference being Virgin's playfulness, which is evident throughout the ship.

Even those things that seemed to try too hard first-time round -- a vinyl record store, a tattoo parlor, a suite complete with a guitar room -- I say bring it on. These touches aren't just gimmicks; they all work together to add up to something genuinely different, creating an overall feel and vibe that will make your experience onboard one that you won't forget in a hurry.

Scarlet Lady Is Not Your Typical Cruise Ship

From the moment you board, the ship sets the mood.

You walk into a glass-encased entrance which refracts light and leads into what Virgin calls "the roundabout," creating a stream of rainbow colors. There's a DJ spinning vinyl records at great volume, people sitting around sipping cocktails, tattooed baristas hurrying back and forth -- it's designed to be like a hip hotel lobby, not your typical cruise ship atrium.

And that feeling of Virgin being one step ahead of your expectations continues all the way round the ship. Nirmal Saverimuttu, the line's chief commercial officer, calls them "Easter eggs":  visual cues dropped artfully round the ship to hint where you are. For example, the signs on the elevators are different colors (purple, red and blue) depending where on the ship you are, and you'll find splashes of the same color on carpets throughout.

Saverimuttu says that creativity drove design. Take Razzle Dazzle, the bizarrely named vegetarian restaurant. The name has no bearing whatsoever on the food -- the team just liked the sound of it, he said.

"When the designer came to pitch the idea, he said to us: 'OK, I've got two ideas, one is kind of a springlike design, with leaves and trees and stuff, but I do have this other idea ...' And he went on to show the team the images of naval ships in camouflage which greet you at the entrance to the restaurant painted in what is called in naval parlance 'razzle dazzle'."

It just seemed to fit, Saverimuttu said. And it does.

Virgin listened to the critics (including us), and they have gotten rid of the L-shaped beds that dominated conversation first time round.

"We're starting it in bed mode," CEO Tom McAlpin said. "It can still go to L-shape, but we're starting it in bed mode because people walked in the first time and said: 'I'm gonna sleep on a sofa bed?' or 'Where's the bed? Where am I sleeping?' So you put it in bed mode and you show how comfortable it is. You put a topper on it, make it up to look really nice and then the next day they come in, and it's a sofa and now it's more acceptable and they realise how functional it is."

The cabins also feel significantly bigger than a typical cruise ship cabin space (we are in the standard category -- Sea Terrace, a balcony). This might be to do with the patented design, in which the cabins are not a uniform shape. Some start narrow and open up, whereas others start wider and then narrow. So again, Virgin is doing something structurally and visually different, creating an illusion of extra space.

The downside to this is a tiny shower room, I fear they have sacrificed bathroom space for extra room square footage. The shower itself, however, is wonderful -- a huge rainshower and a separate hand-held spray.

The other original gripes were no phones (Virgin has since installed one in every cabin); and a hard-to-find the light switch in the wardrobe space. On this sailing, the curtain had been pulled right back to make the light switches and the "do not disturb/make up my cabin" switches easy to spot.

What is genuinely bigger are the balconies, which are almost square, rather than the thin rectangles on most modern ships. Every single balcony also has a hammock, another touch we love.

We also got another glimpse at the Massive Rock Star Quarters, the two-bedroom suite at the front of the ship, complete with guitar room, turntable and a vast terrace with hot tub and yoga area, and it does not fail to disappoint. Yes, it's absurd, yes it's over the top, but again, it works for this ship.

The Food is Outstanding -- And All Included

I've eaten in four spots so far: Gunbae, a Korean BBQ restaurant; Test Kitchen, a molecular-style tasting experience; The Galley, Virgin's take on the traditional buffet; and Razzle Dazzle -- all of which stood out and all of which are included in your cruise fare.

We ate in Gunbae the first time we were onboard, and enjoyed it. It's a fun concept, a bit like Teppanyaki, participatory and with drinking games and a first at sea. You can DIY over a hot grill, or the server will cook the food for you. To be honest, the food was not all that, but it was made up for by a genuinely fun atmosphere. There is also the issue of a mixed group of eaters. The grill plates are not divided, so vegetarians will always eat first and out of time with the meat eaters.

Test Kitchen is a six-course tasting menu based on different ingredients that day. You can pair it with wine or cocktails or beer for a $35 additional fee. The food is exquisitely prepared and presented and carefully explained, and the whole meal lasts around two and a half hours. On land this would cost you at least $150, perhaps more, and on other ships there would be a significant upcharge. I applaud the fact it is included and so beautifully executed. We even met the British chef afterward who explained passionately how he wanted to create a restaurant experience as good as any on land, and he has succeeded.

The Galley is the buffet, which was self-serve before the pandemic. Rather than the traditional islands or rows with different foods, the Galley is a mixture of counters and food areas, with different table types. You can choose countertop tables, banquettes and stools, depending who you're with and how fast you want to eat. Menus are via QR code, but orders are taken in person. (You can help yourself to drinks though, and brand sodas are included.)

Personally, I prefer to wander around a buffet and point to what I want, but you know what? The Galley works. What astonished me is how quickly food arrives and how tasty it is. For breakfast I had a smoked salmon and cream cheese bagel with scrambled eggs on the side and for lunch a noodle soup. The eggs were the only duff note; the rest was spot on.

Razzle Dazzle is a hipster foodie paradise; if there are going to be eye rolls, they will happen here. Sample menu item: "Avo toast: sriracha, watermelon radish, finger lime, toasted seeds." Or: "Coconut milk fairy toast: brioche, condensed milk, rainbow sprinkles." It's all very Insta-friendly, but is it edible? Well, actually, it is. We opted for a turmeric egg scramble: sofrito, salted yogurt, mint and ztb sourdough. It's always fun to try food items you've never heard of.

The Entertainment is Astonishing

We were blown away by Duel Reality last time we were onboard and have been again. There's no show like this at sea, for sure. It's a riff on "Romeo and Juliet"/"West Side Story", with some of the most amazing -- in fact, the most amazing -- acrobatics we have ever seen. As for the see-saw act toward the end, with the two men heading to ever higher heights and doing every more complicated twists and turns, let's just say we were genuinely at the edge of our seats.

Tomorrow we are off to see "acclaimed sexologist Dr. A" in a show entitled "Never Sleep Alone", which is billed as a late-night cabaret with games, demonstrations and rewards: "The night continues at the after party where strangers become friends as you dance late into the night." We'll be sure to report on that in a future article.

OK, so there is one thing we stand by -- the pool is still too small, though I will add a "but" here. In February 2020, it was drained so the pool area looked really tiny. On this sailing, though, it is full, so that shallow area where you can lie rather than swim does make it look a lot bigger. So again, there is reasoning behind this design, which works in warm weather, but not so much in England in February. Plus, there is a large plunge pool/whirlpool which we might have missed/not taken into account last time.

See, we can do humble. We admit we got it wrong first time, and we can't wait to see this ship in Miami. It's a game changer, for sure.