You may also like
Dismiss
Holland America vs. Princess in Alaska
7 Reasons to Cruise Princess in Alaska
What Is an Alaska Inside Passage Cruise?
Mt. McKinley Princess Wilderness Lodge
Top Cruise Destinations 2020
Live from Norwegian Encore's Debut Cruise to Alaska
What's New for the 2022 Alaska Cruise Season?
6 Tips For Cruising to Alaska on a Budget
Just Back from Ward Cove: What You Need to Know About Alaska’s Newest Cruise Port
2022 Alaska Cruises Are Going Strong, But Supply Chain, Employment Issues Remain 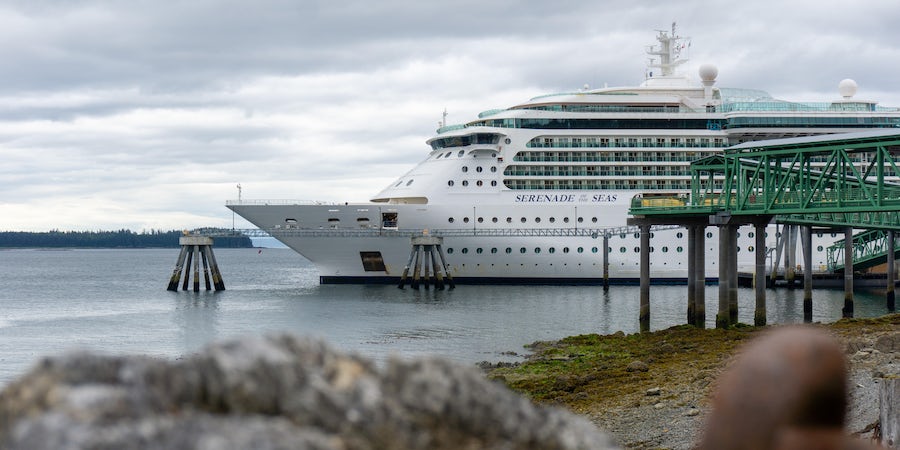 Booked on a Cruise to Alaska? You Might Notice Some New Features in Port

Alaskans aren't ones to sit idly by. While the 2020 cruise season to the state never happened as a result of the global health pandemic, residents and port officials have been continuing on (as best as possible) with a host of new infrastructure upgrades.

Cruise Critic returned to Alaska for the first time in 21 months aboard Royal Caribbean's Serenade of the Seas on its inaugural July 19 voyage. Since then, other lines -- including Celebrity, Holland America Line and Princess -- have also restarted cruise operations, to be followed by others.

While it was wonderful to be back on Alaskan soil once again, we were surprised -- pleasantly so -- to find many ports had been quite busy during the past year. New docks, cruise terminals, shops and other facilities have been added to numerous ports of call, all of which are likely to surprise -- and delight -- returning cruisers to the Last Frontier.

For the most part, these huge investments are projects that were approved prior to the start of the global health pandemic and are only now just seeing passengers for the first time.

Based on our voyage aboard Serenade of the Seas, here's what cruisers can expect to see in some of Alaska's marquee ports of call.

The cruise port owned and operated by a majority of folks from the nearby Tlingit village of Hoonah has come a long way since Celebrity Mercury became the first vessel to inaugurate the manufactured port of call in 2004.

Those who arrived early in Icy Strait Point's existence might be surprised to see the sheer number of changes being made to this increasingly popular port of call.

Take the new high-speed Transporter Gondola that now links the existing cruise berth arrivals landing (known locally as Adventure Landing) with the new Wilderness Landing and cruise berth that have been constructed for Norwegian Cruise Line.

The Gondola was designed to create an entirely vehicle-free zone in Icy Strait Point while still transporting up to 5,600 guests per hour between the two landings.

The ride -- a scenic zip through the surrounding rainforest -- lasts about three minutes and will cost $15 for unlimited use. It will also be complimentary for those purchasing shore excursions, including rides on Icy Strait Point's Ziprider, the longest in the world at 5,330 feet with 1,330 feet of elevation.

Of course, you can also walk between the two terminals, which are located about a mile apart from each other.

Another high-speed Gondola is still under construction. The Mountain Top gondola will whisk passengers up to the Ziprider, eliminating the need for a long bus ride around to the other side of the island. It is scheduled to open in October.

Like Icy Strait Point, Sitka used to be a tender-only port. Ships would anchor out in Sitka Sound and tender passengers into the heart of the city, next to the Centennial building.

With vessels increasing in size, tendering was becoming a cumbersome ordeal that limited time in port. The Old Sitka Dock (now referred to as Halibut Point) is located 7 miles north of downtown Sitka and was constructed in 2012 to handle one vessel.

This past winter, Halibut Point Marine Services expanded that dock, adding new floating bollards and pilings at the end of the pier that will now allow two large-scale cruise ships to come alongside at one time.

To handle those extra passengers, Halibut Point Marine Services constructed a brand-new cruise terminal that takes the place of the former utilitarian building that housed a small collection of vendors and some amenities.

The new building -- which was in the late-stages of construction during our late July 2021 visit -- will eventually include a taproom offering brews from upstart Harbor Mountain Brewing Company, which made its debut during the middle of the pandemic, taking over from Baranof Island Brewing Company, which folded in 2019.

The two-level cruise terminal at Halibut Point makes the area feel more purpose-built rather than its former incarnation, which always felt like an unused pier in an industrial area of town. It's a great first impression for passengers looking to come ashore and explore the gracious "first capital city" of Alaska.

Passengers coming ashore in Ketchikan aren't likely to notice much in the way of new developments -- unless they are arriving onboard one of Norwegian Cruise Line's ships.

For many years now, Ketchikan has had four cruise berths that line the waterfront in a sort of inverted J-shape. Berth 1 is directly across from Salmon Landing and its shops, while Berth 4 is a bit of a hike into town but still doable.

But new developments are coming, as Norwegian Cruise Line Holdings will inaugurate its new terminal located outside of Ketchikan this year, at Ward Cove.

Known as The Mill at Ward Cove, this new two-pier development will be primarily used by NCLH vessels, which will have priority berthing there. Built at the site of the former Ketchikan Pulp Mill 7 miles to the north of the city, the facility isn't entirely complete -- but plans for it are sweeping, including a recreation of the Tongass National Forest indoors, a museum on the history of the Pulp Mill which closed in 1997, and even refurbished rail cars purchased from Canada to show passengers how pulp was transported further afar.

The facility is designed to relieve pressure on Ketchikan's existing dock infrastructure and to spread arriving passengers out more. It hasn't been without controversy -- residents worry some passengers docking in Ward Cove will never bother to take the 17-minute ride into town and that coaches will clog the narrow two-lane road linking the two locales -- but it represents the largest new development for cruise in the region in over a decade.

If all goes well, Norwegian Encore will inaugurate the new facility when it arrives for the first time August 12.

Aside from Ward Cove, the most pleasant change all passengers are likely to find in Ketchikan is an absence of the crushing throngs of people that used to make a stroll along Creek Street, the city's historic former Red Light district, tricky.

Passengers coming ashore in Juneau will notice things are much as they have always been in the capital city, with ships tying up at four berths lining the inner waterfront off the Gastineau Channel.

The Alaska Steamship Dock (Dock E) is always prized by passengers for being right next to the town Library and parking structure. The AJ dock -- the last in the line -- is less so, thanks to its southerly location that requires a short bus ride into town, or a pleasant 15-minute stroll if the weather cooperates.

What passengers might notice, however, is that a few things have changed for popular attractions and businesses in the last year or so.

Alaskan Brewing Company has a new taproom located out of the downtown area. While the Franklin Street retail location is still open for visitors and every bar in town serves the brewery's popular Alaskan Amber, its brewery tours are suspended for now due to COVID-related restrictions.

Passengers cans still visit the taproom by booking the Alaskan Ales and Whales excursion available from most cruise lines or cab it out to the remote spot near the town's Costco. Fair warning: Taxis in Juneau are not cheap. Best to grab a group of friends and split the cost.

A good reason for going, besides the beers: the Wild Alaskan food truck. This unassuming, bright orange food truck can usually be found in the Alaskan Brewing Company's parking lot and serves up the best halibut and chips we've ever tasted. Just don't tell anyone else, OK? Let's keep this between us.

The tasting room is closed Mondays, so check your cruise line schedule before hopping a taxi out there.

Other notable changes in Juneau include more shops located in the blue Merchants Wharf building (where the popular Hangar restaurant and pub can be found), and more outdoor seating at popular venues like Tracy's Crab Shack, added as a result of the pandemic.

Word on the street is a new taproom could open on the waterfront, in the old Tracy's Crab Shack location, before the end of the season.