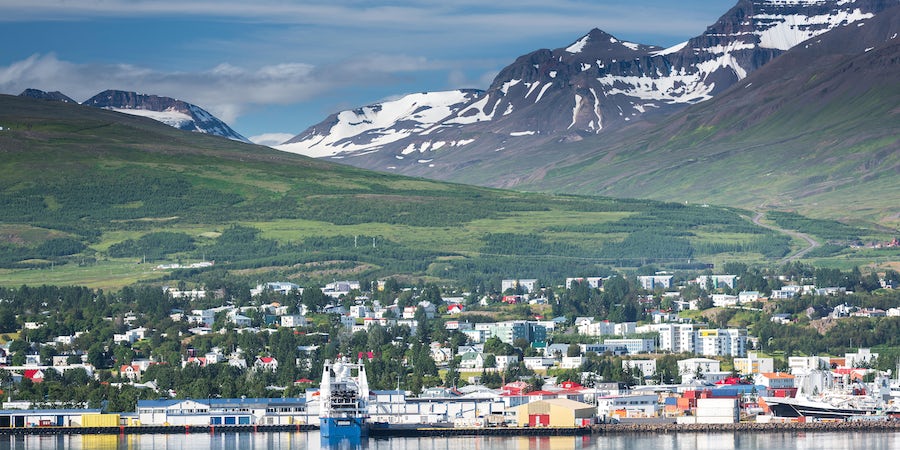 With natural attractions such as rugged and snow-topped mountains, gorgeous fjords, glaciers and whales, plus the Midnight Sun creating long days in summer, Alaska and Iceland have a lot in common. They are both ideal cruise destinations for nature-lovers, with eye-popping sights close to the sea -- and many more to be discovered inland.

Southeast Alaska, the area of Alaska most visited by cruise ships, has a well-developed tourism infrastructure with dozens of options for shore excursions -- and some people would argue too many tourist attractions -- at each port of call.

Iceland, which is about the size of Kentucky, is relatively new to cruise ship stops outside the capital city of Reykjavik, the largest city with a population of about 123,000. This summer, Viking Cruises began doing one-week circumnavigations of Iceland, and other lines, including luxury operator Crystal Cruises, have jumped on the Icelandic bandwagon in recent months.

Like Alaska, Iceland is a place where you can see snow even in summer. It has a good variety of experiences for both culture-seekers wanting to learn about Vikings, elves and trolls and thrill-seekers hoping to see such action as volcanic activity.

A few other things to know upfront about Iceland. You won’t see bears in Iceland as you might in Alaska. Iceland’s only native animal in is the Arctic fox. You will likely hear references to the island’s starring role in HBO’s Game of Thrones, especially if you book a Golden Circle tour from Reykjavik. Iceland doubled for Westeros on the show.

In both Alaska and Iceland, you may encounter chilly temperatures even in summer, so pack accordingly. And don’t miss eating the daily catch; fresh seafood is a culinary highlight.

Having sailed in both destinations, our advice is don’t miss either.

Here’s what to expect on a cruise through Iceland:

Both Alaska and Iceland are prime whale watching destinations. In Alaska, there are nine whale species, and you’ll likely spot humpbacks whales right from your ship especially in places such as Glacier Bay – and more if you book a whale watching tour (with spotting of marine life often guaranteed by small boat operators).

In Iceland, there are a dozen species; it’s most common to spot small Minke whales, along with white-beaked dolphins and humpbacks. Blue whales, the largest mammal, are occasionally spotted in the north. Whale-hunting was until recently a significant business in Iceland, but the focus has moved more towards the animals as a tourist attraction. You’ll find whale watching tours in Reykjavik, your embarkation point, as well as in most of the ports of call you’ll visit -- with sightings particularly frequent in northern Iceland.

In Alaska, tidewater glaciers meet the sea in spectacular fashion, and even from your ship you’ll experience the sight and thunderous sound of house-sized chunks of ice breaking from a glacier’s face and crashing into the sea. For many, it’s a highlight of an Alaska cruise.

On the other hand, Iceland is home to Europe’s largest glacier, Vatnajokull, which covers about eight percent of the island’s land mass (its surface is more than 3,000 square miles) and has eight outlet glaciers. None reach the sea, so the best way for cruisers to see the ice is on an overland shore excursion. From the small village of Djupivogur, a full-day tour gets you to the southwest coast to visit the glacial-fed Fjallsarlon ice lagoon. For adventure-seekers, board a Zodiac and motor past floating icebergs for close-up views of the ice face.

In Alaska, everyone always wants to see eagles. They are a common sight -- you can see them hanging out on telephone poles, hanging around fishing boats, soaring over the sea, forests and city streets. In Iceland, the birdwatching goal is puffins.

The island nation is home to one of the largest Atlantic puffin colonies in the world; more than half of that species breeds in Iceland. Prime places to spot the birds include western Iceland, the western most point in Europe.

Cruisers can keep their binoculars focused on cliffs on the Westfjords coastline, or book a bird-focused shore excursion, for instance, to Vigur Island, human population 10, bird population vast. In addition to puffins, the island is home to elder ducks and black guillemots. Heimaey, one of the Westman Islands, is another prime birdwatching site.

Iceland’s hot tourist attraction is the Fagradalsfjall volcano on the Reykjanes Peninsula, which began erupting on March 19, 2021 and is the first eruption on the peninsula in 800 years. If you’re lucky, you might spot smoke and even red lava on your ride from Reykjavik's Keflavík Airport to your ship, or on a shore excursion out to the Blue Lagoon, where you can soak in geothermal seawater. Adventurous hikers can also get closer to the site, with Iceland’s Coast Guard monitoring for safety. Excursions from Reykjavik and other ports afford less-stressful closeup views of steam vents, fumaroles, and bubbling mud pots.

For those who enjoy active exploration, Iceland, like Alaska, has great adventure travel options. You won’t find dogsledding or walking on top of a glacier, as you would in Alaska. Viking Cruises shore excursion options include riding Icelandic horses across a lava field, exploring rugged landscapes by ATV, hiking up a mountain or down 100 feet below the surface in a carved-out ice tunnel and paddling a kayak in a quiet fjord. Expedition lines such as Lindblad boost the adrenaline factor, with Zodiac and kayak exploration.

Alaska has stunning fjords including the Kenai Fjords with its prolific marine life and Harding Icefield, Misty Fjords with its tall cascading waterfalls, and Tracy Arm with the massive twin Sawyer Glaciers.

Iceland is the fjord champion with 109 in total, some of which seem to go on forever as you glide in clear water past dark cliffs, hills covered in moss, and snow-covered mountains. Your cruise will bring you to charming fishing towns and villages at the head of fjords, places such as Seydisfjordur, population about 700, which has to be the prettiest village in Iceland with its colorful, Norwegian-influenced wooden homes and mountain-backed setting.

Iceland has massive waterfalls, carved by volcanos and fed by glacial waters, and some of them come equipped with local stories dating back centuries. Among those easily accessible on shore excursions during a cruise are Godafoss (Waterfall of the Gods), about a half-hour drive from the port town of Akureyri in north Iceland.

Godafoss is 39 feet tall and nearly 100 feet wide. According to Icelandic Saga, a local chieftain threw his statues of pagan gods into the waterfall in the year 1,000, after deciding Icelanders should become Christians. The more visited Gullfoss (Golden Waterfall) near Reykjavik, dramatically drops into a narrow river gorge. The tall Skogafoss waterfall in south Iceland made an appearance in HBO’s Game of Thrones (as dragons flew overhead in Season 8).

Alaska has hot springs, but they are not on the typical cruise passengers' map. In Iceland, a dip in a geothermal energy-heated hot spring is a highlight. The hot water is rich in minerals and said to bring health benefits – such as improving circulation and relieving skin conditions and muscle ache. The most famous place to dip is the manmade Blue Lagoon, easily accessible from Reykjavik. New on the scene, and even closer to the city (a short cab ride away), is the natural Sky Lagoon. Cruises serve up experiences farther afield such as the saltwater GeoSea baths in Husavik on the northern coast and the floating pools known as the Vok Baths on Lake Urriðavatn in eastern Iceland.

Alaska and Iceland both have bragging rights for having land above the Arctic Circle. Most cruisers don't get that far north in Alaska, but in Iceland you'll cross the circle by sea in the north on a circumnavigation, and get a certificate to prove it. Some ships also stop at the remote Icelandic Arctic island of Grimsley.

For further bragging rights, if you book a Golden Circle tour from Reykjavik, or a tour to the geothermal areas and towering lava castles and caves outside of Akureyri, you may visit where the tectonic plates of North America and Eurasia meet -- stretch and you can have your feet on two continents.