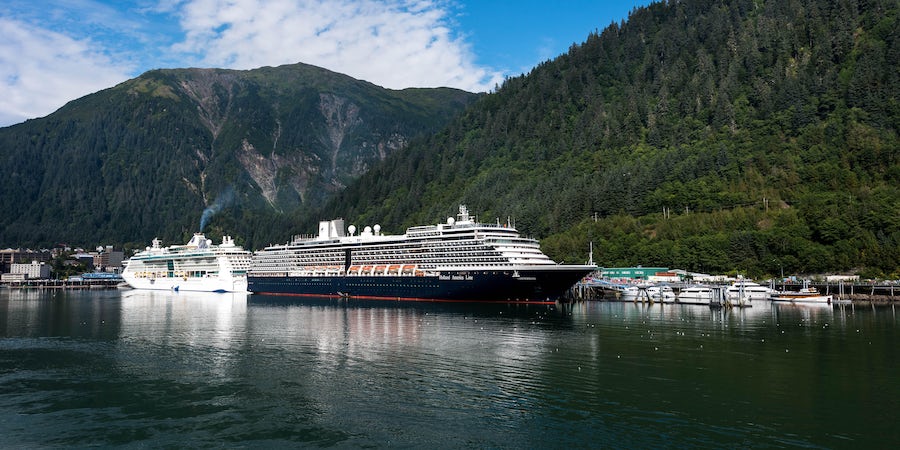 For the first time since fall 2019, mainstream cruise ships are coming back to Southeast Alaska's port towns.

The first big ship to return to the region is Royal Caribbean's Serenade of the Seas, which sets out from Seattle on its first cruise north on Monday, July 19. The ship already completed a successful test cruise to Alaska, stopping in Ketchikan, last week.

The ship will be followed in the coming weeks by vessels from Celebrity, Holland America Line, Princess, Carnival, Silversea and Norwegian Cruise Line, all of which are able to sail to Alaska once again thanks to the Alaskan Delegation and its efforts to bypass the Canadian port calls mandated by the U.S. Passenger Vessel Services Act (Canada remains closed to cruise ships until March 1, 2022).

For many Alaskan towns, the return of large-scale cruise ships -- all of which are operating under vaccination mandates for the majority of passengers and crew -- is more than just a welcomed return to 'normal'. Cruise ships bring the majority of all tourists to Southeast Alaska, and the loss of cruise ships for the entire 2020 season -- and much of the 2021 season -- has hit most towns in the region hard.

But Alaskan cruising is back, and anticipation is high among local towns, tour operators, cruise lines, and passengers booked on these first summer sailings.

“It’s a happy day for Alaska’s tourism industry and communities that rely on tourism in Alaska," said Alaska Travel Industry Association President and CEO Sarah Leonard on July 9, when Serenade of the Seas stopped in Ketchikan on its first technical sailing for the CDC, becoming the first large cruise ship to call on an Alaskan port since October 2019.

"This short cruise season means the difference between reopening or closing for good for so many small, locally owned businesses. We are grateful to our congressional delegation, governor and legislators for their hard work to bring cruise ships back to the state this year. We are really proud that we could fight alongside them on behalf of our members and all of the statewide tourism businesses and support them in this recovery period."

Alaska senator Lisa Murkowski was alongside in Ketchikan to welcome Serenade of the Seas on its July 9 technical call. Senator Murkowski had long advocated for a safe restart of the cruise industry and was part of the Alaska Delegation lobbying congress to temporarily repeal the Passenger Vessel Services Act to bypass the required Canadian port stop.

“I am pleased to welcome the first large cruise ship of the 2021 season," said Murkowski at a speech alongside Ketchikan's Pier 4, where Serenade of the Seas tied up. "Tourism is the lifeblood for hundreds of Alaska small businesses and thousands of employees.

"Today marks an important step toward Alaska’s road to economic recovery from the pandemic."

In all, the 2021 season will see nine large cruise ships operate 78 sailings between now and mid-October to Alaska. It's a fraction of what a normal season looks like, when hundreds of calls are expected in the short season. In 2019 alone, over 1.3 million visitors came to see Alaska by cruise ship, bringing in over $2.2 billion in visitor spending, $1.4 billion in payroll for Alaskans, and $214 million in state and municipal revenue.

However small it may be, the 2021 cruise season stands to be the most important -- and impactful -- in the State's history.

Even though the season may be dramatically reduced, cruise lines are still pulling out all the stops for their 2021 Alaska voyages.

Princess Cruises is rolling out its "North to Alaska" onboard features that include food and beverages designed around Alaskan themes, history and ingredients. The line has been sailing to Alaska for half a century and has fine-tuned its Alaskan program this year aboard Majestic Princess, which continues to call on the "big three" marquis ports of Juneau, Ketchikan and Skagway.

Holland America Line, similarly, is rolling out its Alaskan-themed specialties aboard Nieuw Amsterdam that have been a signature of the line for decades. Passengers will find the Park Ranger Program available on Glacier Bay sailings, along with traditional Dutch split pea soup and hot (and possibly spiked) beverages to keep the chill away.

But cruise lines have visiting Alaska have more latitude this year when it comes to designing their itineraries, thanks to the removal of a required stop in Canada. That means instead of calling on Victoria or Prince Rupert for a few hours, ships can now throw in a fourth Alaskan port call -- and it's creating some of the best Alaska-centric itineraries the region has seen in decades.

Holland America Line is sending its Nieuw Amsterdam, for example, on an immersive itinerary that includes a day of scenic cruising in Glacier Bay National Park, followed by an evening call on the Tlingit-run port of Icy Strait Point. That's in addition to port stops in Sitka, Juneau and Ketchikan.

More cruise lines this year, including Norwegian and Royal Caribbean, are opting to cruise Endicott Arm instead of Tracy Arm Fjord just to the north. Located within the Fords Terror Wilderness near Juneau, Endicott Arm is bookended by the imposing Dawes Glacier. It's a wider fjord than Tracy Arm, where ships have very little chance of actually making the entire transit to the North and South Sawyer Glaciers, as the latter half of Tracy Arm is frequently choked with ice.

Other lines are opting for longer calls in port. Expect to see port stays until 8 p.m. for some vessels tying up in Juneau, Ketchikan, Skagway and Icy Strait Point, allowing for more time on-shore and more chances to experience life the way Alaskans do.

Norwegian Cruise Line is also doing something completely different this year, offering some of the latest departures of any season with sailings to Alaska from Seattle that run well into late October.

Norwegian Encore makes its maiden debut in Alaska on August 7 and will continue in the region until its final arrival into Seattle on October 23. It's an extremely late foray into Alaskan waters, as October typically brings more rain and the possibility of snow and colder temperatures – but also the opportunity to see the Northern Lgihts

For those looking to see Alaska in an entirely new light -- and experience a bit of adventure at the same time -- Norwegian Encore's fall journeys to the Last Frontier are unlike anything else that's ever been on the books.

While anticipation of cruising's return remains high among Cruise Critic members, there seems to be particular excitement around the upcoming Alaska season. Cruise Critic members have been tracking ships heading to Alaska for months, and discussion has run high about what the season will be like.

"We really had no intention of going to Alaska this summer but with all of the excitement, we had to be one of the first to get on a cruise ship!" writes shipshapegirl on a 24-page Roll Call for cruisers booked on Nieuw Amsterdam's July 24 debut voyage from Seattle.

"My first cruise to Alaska and second cruise with Holland America was in 2004 on the Holland America Oosterdam," writes LAFFNVEGAS. "We are so looking forward to walking across that gangway to be greeted by the crew."

On a roll call for Serenade of the Seas' first sailing back on July 19, cruisers referenced the uniqueness of these voyages.

"Couldn’t pass up this cruise and a chance to be a part of cruising history," writes hawaiideb.