You may also like
Dismiss
6 Things to Expect When Cruising to Potentially Unstable Areas
Give Back With Purpose Excursions on Carnival Cruise Line
How to Prepare for a Snorkel and Dive Cruise
Busiest Cruise Ports: How to Avoid the Crowds
8 Exhilarating Shore Excursions
Pictures of Carnival Panorama
48 Hours in Brisbane Before or After a Cruise
Will I Have to 'Social Distance' on My Next Cruise?
Your Favorite Cruise Ship is For Sale? Here's Why You Shouldn't Panic
Photos From MSC Cruises' Return to Sailing in the Mediterranean 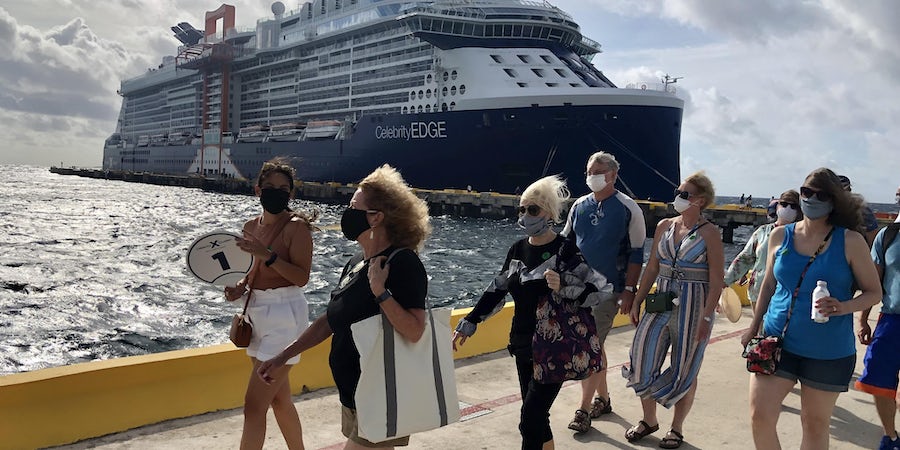 Figuring Out Your Cruise Shore Excursions in a COVID World

Mask or no mask? Independent or on your own in port? Ensconced in a cruise ship bubble or not?

If you're on a cruise in summer 2021, these types of issues are going to arise as you try to figure out how to spend your time in port – and often you won't know until the last minute what you'll be allowed to do or not.

Nearly every port and destination in the world has their own protocols and regulations for protecting their population from COVID-19. With the rise of variants, the danger is still real for many countries where vaccines aren't as readily available, even as Americans begin to enjoy their post-pandemic lifestyles.

It all makes how passengers can spend their time ashore a tricky balancing act for the cruise lines, with choices that might not always seem to make sense.

Take Celebrity Edge's much-anticipated restart cruise to the Western Caribbean on June 26. The port calls on this first cruise from an American homeport are tried and true destinations -- Costa Maya, Cozumel and Nassau in The Bahamas.

Yet passengers weren't told until two days before Celebrity Edge left that we wouldn't be able to disembark on our own in Mexico. The situation was further muddied when, as we arrived in Costa Maya, we were told that we could wander around the shops in the manufactured port, but not leave the area or go to the nearby town of Mahajual on our own.

Meanwhile, in Cozumel, shore excursions were restricted -- even as sister line Royal Caribbean had been allowing their passengers on Adventure of the Seas to get off and walk around on their own for several weeks. Celebrity and Royal are owned by the same company, and the two ships -- Celebrity Edge and Adventure -- were even in Cozumel on the same day. What gives?

We asked. Celebrity told us that the decision to open the shops in Costa Maya came because all of the vendors and workers in the contained port area had agreed to be tested for COVID-19.

In Cozumel, I asked specifically if local regulations forbid two cruise ships from having their passengers intermingle freely and was told no.

At a dinner, it was pointed out to us by a senior executive that the more upscale passengers onboard Celebrity Edge were probably not on the ship to visit Senor Frog's. The line did offer a fair amount of tour options in Cozumel, such as the standard beach breaks, jeep adventures, kayaking and snorkeling, and ruin tours, as well as margarita and taco making workshops.

Still, some Celebrity guests are aware of and might want to visit Cozumel favorites such as the beach clubs Mr. Sancho's or Nachi Cochem. People do want to support the Mexican people as well, many of whom have been without their tourism jobs for the 15 months that cruises were not sailing.

Celebrity has been upfront in saying that the policies in port that apply to one sailing might be changed the next week or next month.

"We are constantly reviewing and evaluating our policies," a Celebrity spokesperson said in a statement. "Based on the current travel advisory for Mexico, combined with low vaccination rates, we made the decision, out of abundance of caution, to require Celebrity curated tours on this sailing."

Masks To Protect Them, Not You

One thing that is required when going ashore in Mexico and hasn't changed in the last month is that passengers are asked to wear a mask when indoors, and also outside when walking around in close quarters.

After spending so much time on a vaccinated ship, where face masks are not required, it is a bummer to have to slip it back on when you get off the ship and step into the hot and humid air. But the vaccination rates in Mexico are lower than the United States, and many younger workers are still unable to get the vaccine.

We heard some grumblings from fellow passengers on this. But it's vital for travelers to understand that even if they're vaccinated themselves, they could still unknowingly pass COVID-19 to those who aren't, which would be disastrous in a place where the shots are hard to come by.

I didn't find the rules too difficult in Costa Maya, when I took a Celebrity excursion to the Chaccoben ruins. Our guide was very specific in telling us exactly when we needed to wear our masks -- in the terminal and port shopping area, on the minibus taking us to the ruin site and in the restroom/shopping area near the ruins. Masks could be removed as we walked around the ruin sites.

Most passengers complied. Again, because we're a vaccinated ship, tours were being run at about the same size as they were before the pandemic; there were at least 30 people on our tour. That means onboard those mini buses, you are in close quarters, especially for an hour-long ride to the ruin site.

If anything, putting on your mask to protect people who don't have the same access to the vaccine as you do is a good reminder of your privilege and fortunate situation.

I've now seen it on two separate trips -- when a cruise ship returns to a port in the Caribbean, it's a very big deal for the people who work there.

Two weeks ago, in Cozumel, vendors were thrilled to have us back. Celebrity Edge passengers received a similar welcome in Costa Maya, where workers all had shirts made that said "We are so excited to see you again, #WelcomeBack #CostaMaya."

While Costa Maya is often dismissed by those who point out that it was custom-built for cruise ships, the jobs that the industry brings in are still ones that are important for the local economy. Our tour guide, Leticia Alonzo, traveled over an hour from her home near the Belize border to work. Our bus driver came from Cancun -- two hours in the other direction.

Talking to us, Alonzo said that the return of cruise activity helped not just her and the bus driver, who were employed directly, but also the local vendors who sell to the Mexican workers. She pointed out that the pineapple and food vendors on the side of the road going into the port were selling to Mexicans, not just tourists, and that the full picture needed to be taken into account.

"If Costa Maya is open, things can really change," she said. "It really helps the economy to have this back. It's good to be able to get a job again."

Alonzo herself had been vaccinated, and was proud of the fact. She said that Mexican people in their 30s were now eligible for the vaccine, and that the rollout was going better than it had even a few months ago.

On the bus ride back, we talked to several cruisers who went out of their way to buy a souvenir or tip the guides a little more than usual. I am now the (proud?) owner of a Day of the Dead statue that I bought simply so I could do something. It's almost impossible to visit a place where people have been out of work for so long and not want to help.

With all the uncertainty surrounding port visits, is it even worth it to get off the ship, particularly if it's a destination where you've been before?

My advice: get off the ship, whether you're trying something new or revisiting an old favorite. The long months of lockdown might allow you to see ports of call through new eyes.

I had been to the Chaccoben ruins years before, so it wasn't my first time. While the Mayan site isn't the biggest or the best in Quintana Roo, it's still pretty impressive -- and certainly not something that I'm going to see in my backyard in Pennsylvania. I scrambled up the site's base, marveling at the thick stone, and heard again the stories of the ancient civilization. The whole experience was much better than sitting through a Zoom lecture.

Having some patience and flexibility -- not to mention understanding -- with local regulations is also important. Many cruisers don't think about the impact that their actions can have in different destinations, both positive -- the money they bring to the local economy -- or negative.

No self-respecting traveler would forgive themselves if they carried the virus to an unprotected population.