You may also like
Dismiss
Harmony of the Seas vs. Allure of the Seas
6 Royal Caribbean Cruise Hacks
Royal Caribbean Cruise FAQ
Princess Cruises FAQ
Cruise Critic Members Shout Out a Few of Their Favorite Crew
Why Germ-Zapping Robots and AI Technology Could Be the Future For Cruise Ships
Will I Have to 'Social Distance' on My Next Cruise?
How Reassuring are New Cruise Cancellation Policies Really?
What Is Royal Caribbean Doing to Keep You Safe?
The Self-Serve Cruise Buffet Is Back, On Many Major Mainstream Cruise Lines 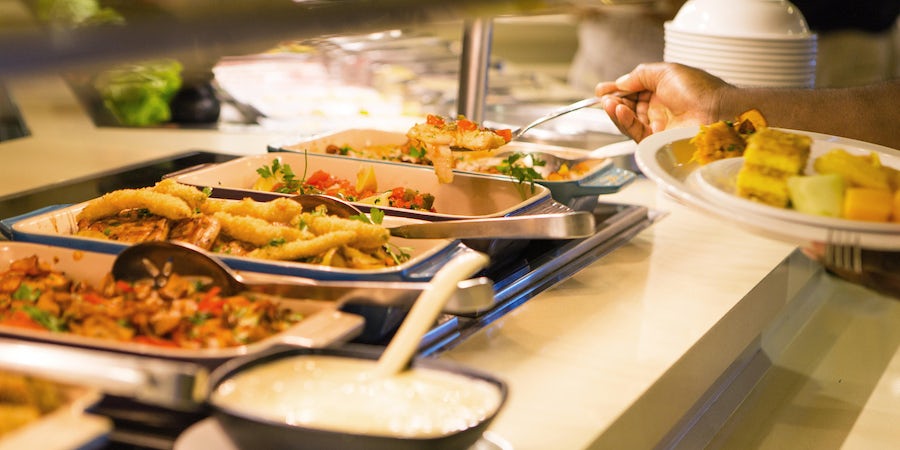 Is the Cruise Ship Buffet About to Make a Comeback?

In a comeback worthy of a superhero franchise, the traditional cruise buffet looks like it might rise again.

In the latest update to its guidance on cruises, the U.S. Centers for Disease Control and Prevention said the elimination of self-service buffets and drink stations were now only recommendations on ships with fully vaccinated travelers.

During the early days of the COVID-19 pandemic, debate raged about the potential end of the traditional shipboard buffet. Royal Caribbean had suggested in mid-May 2020 that the buffet might be a thing of the past -- prompting a furious backlash from cruisers.

"I think in the beginning, there will not be a buffet … that's how I see it," Royal Caribbean International CEO Michael Bayley said on May 13, 2020. "We will utilize the space, we will utilize the Windjammer, but in all probability, it won't be a classical buffet. It will be something more akin to a restaurant."

Royal Caribbean was forced to clarify its position just one week later, stating on May 20 that the Windjammer buffet would continue to exist aboard all Royal Caribbean ships.

"It doesn't mean that you don't have a buffet," said Royal Caribbean Group Chairman and CEO Richard Fain, noting that the Windjammer would likely continue to operate with waiter-driven table service instead of self-serve options.

Fast-forward one year, and the CDC's revised guidance now says shipboard buffets are able to resume as they were pre-pandemic for vessels mandating the full vaccination of all passengers and crew.

But after a year in pandemic lockdown, is a shipboard buffet something that cruisers will want to see come back in its previous form?

Though prized for its speed and convenient meals, shipboard buffets have long been the brunt of many a cruise comedian punchline.

Located off the pool decks of most ships, cruisers either love-or-hate the casual eatery which tends to be crowded, chaotic, and displaying some of the worst behavioural traits of passengers. (Years ago, we witnessed a passenger dunk her entire hand into a vat of sauce to taste it, ruining the sauce and forcing staff members to hurriedly take the tray out of the buffet lineup.)

Pre-pandemic, though buffets always had hand sanitizing stations and even employees standing at key entrance points with sanitizer ("Washy-Washy, Happy-Happy!"), instances of Norovirus continued to crop up onboard some vessels, likely brought on by the sharing of common serving utensils.

While cruise lines have attempted to reinvent the buffet with some success (Viking's oceangoing ships, Holland America Line's Koningsdam and Celebrity Edge, in particular, stand out as prime examples of buffets done right), the casual eatery remains a controversial aspect of cruise life.

Cruise Critic's own editorial staff were split over whether the news that buffets could continue was good or not, with many expressing a desire to have a casual buffet-style eatery with table service as a happy-medium.

Our own UK managing editor Adam Coulter experienced the new-style buffet himself on MSC Cruises' newest ship, Virtuosa. And although sailing with just 1,000 passengers on a 6,000+ passenger ship, he did not find the buffet experience a problem.

"The only pressure point we predict is when the ship sails full. Inevitably it takes longer to be served, so there may be delays as the ship starts to get more crowded," he wrote.

Chances are good that, even on fully-vaccinated ships, the buffet experience will continue to evolve as cruising resumes from the U.S. this summer.

It's a different story on ships without a vessel-wide vaccination mandate. On those vessels, buffets will still be restricted, with no self-serve options available under the CDC's guidance.

This includes other self-serve options like beer and wine dispensers, ice cream stations, and the like, which must be manned by a dedicated staff member.

Cruise ship buffets can operate on non-vaccinated ships, but passengers will be unable to get their own food. Instead, most lines are expected to rely on a waiter-driven system where staff members bring requested food to passengers.

Cruise Critic members reacted positively to the CDC's updated guidance, noting that at least for ships mandating full vaccination against COVID-19, the differences between the pre-and-post pandemic worlds should be minimal.

"A fully vaccinated cruise can be as close to normal as anything we have seen," writes TNcruising02. This is good news and makes so much more sense than their original requirements of wearing masks on the pool deck or while dining."

Others were more succinct. "Gimme my buffet!", writes roger001.