You may also like
Dismiss
What Is an Alaska Inside Passage Cruise?
5 Reasons to Love Windstar in Alaska
Monaco Grand Prix Cruise Tips
Whale Quest Juneau Whale-Watching Excursion Review
Mt. McKinley Princess Wilderness Lodge
Alaska Bike Tour Cruise Shore Excursions
Carnival Kitchen on Carnival Cruise Line
How To Cope With Cruising's Pause? Plan Far, Far Ahead
Why There's Still Nothing Like a Day on the Water
Inside Passage Towns Implore CDC To Reopen Cruises: Just Back From Alaska 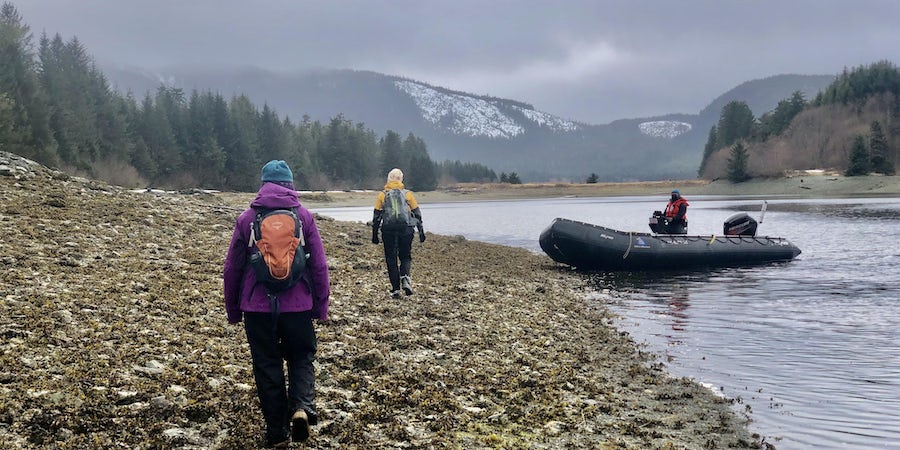 Just Back From Alaska: Traveling On Our First Cruise, Vaccinated and Ready to Go

The driver from the Sitka airport was the first, but by no means the last, person to ask me the question that's really on everyone's minds in spring 2021.

The answer from me, happily, is yes. And throughout my weeklong trip in Alaska, which encompassed a five-day sailing with Alaskan Dream Cruises in Sitka Sound and whirlwind interview circuits of the town and Juneau, it was the response that almost everyone else had as well.

I've seen the future from Alaska, where COVID-19 vaccination rates are among the highest in the nation and people are emerging -- slowly and safely -- from the pandemic's brutal social isolation. While the state itself stands a bit under 40 percent with at least one dose, the towns of the Inside Passage have distinguished themselves.

In Sitka, 65 percent of the population over 18 has been fully vaccinated. Juneau isn't far behind at 53 percent -- and neither of these numbers include people who have had at least one dose. In both towns, the senior population has embraced inoculation, with full vaccination rates at 82 percent and 86 percent respectively. The native populations who live within the Inside Passage top 90 percent vaccination rates in some communities.

I wondered why this state in particular would see such a high vaccination rate. "It's simple: We want to get back to work," a boat captain with Alaskan Dream Cruises told me. That makes sense, as Alaska has many industries that require close proximity to others, such as fishing and canning. The towns in Alaska often have limited access to hospitals, and residents are acutely aware of the distances involved to get emergency treatment.

Getting back to work was one of my reasons for getting vaxxed as well. (Although, let's be honest, I would have gotten vaccinated as soon as possible, no matter what my profession, both for health issues -- I suffered from long-haul COVID-19 in 2020 -- and because I believe it's the right thing to do.) The pandemic has kept most travel writers grounded for over a year, for good reason, as we followed CDC recommendations and did our part to lower the curve.

Now that travel is starting to pick up, I'm glad I waited until vaccines kicked in to take to the skies and ships. Travel simply feels safer once you've had the shots.

I had seen pictures of empty terminals and short lines during 2020. But by late March 2021, people have returned to the skies; TSA reported record pandemic-era passenger counts in the days leading up to Easter. And while everyone around me adhered to federal mask mandates, the plane still seemed like a lot of people, in an enclosed space.

Quarters on the plane felt especially close when people all seemed to take their masks off at the same time to eat and drink. I was glad that I had upgraded to premium, which kept a middle seat open. Not all airlines have this option, though. My friend and I agreed, we would not have wanted to do fly before we were vaccinated -- especially during a time when post-Spring Break mini surges were going on.

By the time we arrived to Alaska, the long trip from the East Coast had left us a little jangled. The wide-open spaces outside Juneau were just the antidote.

Alaska in April can be snowy, and the usually packed Nugget Falls trail at Mendenhall Glacier only had a few families (and some playful dogs) walking through the woods. Rediscovering the outdoors has been a pandemic silver lining, and we were far more comfortable out here than we were in transit.

Forming a Bubble, Vaccinated and Tested

I had wondered how I would feel on a cruise ship, dining and interacting with strangers. My social circle went virtual during the pandemic, and I have seen few friends in person for over a year. Family visits were done outside, until we received vaccines.

It turns out that social muscle memory is hard to kill. Most passengers were from Alaska, and they had been living a post-vaccination life with other protected friends and family for a few weeks already. The crew had also been vaccinated, thanks to an executive order from the Alaska governor that grouped maritime employees as essential.

Alaskan Dream Cruises line has instituted a vaccine mandate for everyone during the regular season, which begins in May. It joins fellow Alaskan small ship operators such as UnCruise Adventures and Lindblad in doing so. As a secondary precaution, the line had us take rapid COVID-19 antigen tests before we boarded.

These measures helped us feel like we were in "a bubble," the term that now has new meaning in the COVID era. As such, we felt comfortable on the Kruzof Explorer, viewing wildlife on deck together and taking outdoor-focused shore excursions. It helped that the boat, a renovated crab fishing vessel, was plenty large for seven passengers and six crew, making distancing possible.

I wore my mask when the other six passengers arrived at the ship. All had taken their antigen tests at the line's hospitality suite in Sitka, all were negative (the three of us who had come from outside Alaska had also taken a PCR test a few days earlier to enter the state). We said our muffled introductions and kept the masks on as we toured the ship and until we reached our cabins.

From that somewhat awkward first meeting, life loosened up, particularly as the ship took off from the dock and entered the whale-rich waters of Sitka Sound. With the chilly fresh air whipping at our faces and plenty of social distancing available, there was no need for masks outside, spread out. We shivered, despite our layers and outerwear, and began to get to know each other there, full facial.

The rest of the trip unfolded as a small ship sailing usually does. We spread out in the Kruzof Explorer's roomy upstairs lounge, scanning the horizon with binoculars for tell-tale whale spray or sea otters floating by on their backs. The ship's naturalist kept a running total of our finds, and frequently referred to a map so we could figure out where we were among Baranof Island bays and inlets. We raced outside frequently, to get photos, to rhapsodize over the landscape, to get to know each other.

On a small ship, where bonding with other like-minded travelers is an essential part of the experience, a fully vaccinated ship where you can drop your guard made for a much better cruise. I felt comfortable knowing that my new cruise friends were vaccinated and appreciated the crew's ability to deliver a good time -- as well as excellent cocktails and meals -- while wearing a mask.

It also said something to me that Allen Marine, which owns Alaskan Dream Cruises, cared enough about their crew to make sure that they were vaccinated. While not all cruise lines are going down this route, Cruise Critic keeps a list of cruise lines that do have vaccine requirements -- and it's growing.

I came away from this first vaccinated work trip feeling optimistic, for the first time in a while, about the resiliency of not only cruising but also of post-COVID-19 life.

It's one thing to read and write stories about an industry that is doing its best to have some of the safest protocols out there. (I certainly wasn't required to be vaccinated or tested before I boarded the plane or stayed at my in-transit hotel.) It's another to experience them first-hand -- and to have a great time while doing them.

The highlights of the cruise were the same as I would have experienced on a small ship Alaska cruise before the COVID-19 pandemic. I saw wildlife, engaged in bucket list adventures -- if someone ever offers you a side trip to Baranof Warm Springs, take it! -- ate a ton of fresh seafood and king crab, met fantastic people.

It all seemed more heightened, though, because the sensations of adventure and new connection that you can get on a cruise had been missing for the previous 13 months. We all felt it, and even after five days on the ship together, our Kruzof Explorer bubble didn't want the experience to end. We made plans to meet up at Sitka's Pioneer Bar -- known by the locals in the group as the P Bar -- later that afternoon. And despite an unseasonable snowstorm, most of us made it, including some off-duty crew.

Clinking glasses at the P Bar, we toasted the life post-vaccination, and what is becoming possible again because of it.