You may also like
Dismiss
12 Things You Can Only Find on Norwegian Cruise Line
10 Stupid Questions You Should Never Ask in Alaska
What Is a VAT Tax and Where Will You Find It on a Cruise?
Hidden in the Fine Print: 16 Things You Need to Know About Your Cruise Contract
8 Reasons Why Norwegian Cruise Line's Pride of America Does Hawaii Best
6 Cruise Ports and Regions That Have Banned Sunscreen (and What to Use Instead)
6 Ways LGBTQ Cruisers Can Stay Safe on a Port Stop in Jamaica
Do Kids Need Passports for Cruises?
What Is the Economic Impact of the Cruise Industry in the United States?
Step By Step: How to Submit Comments on Cruise to the CDC 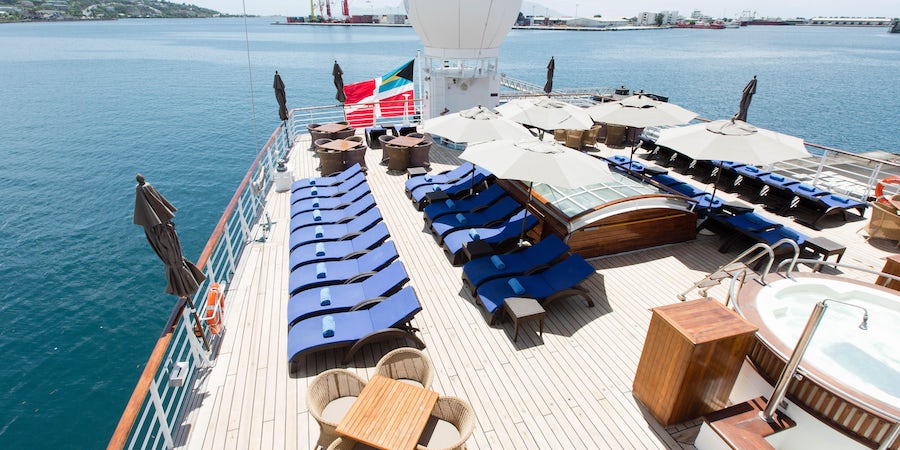 The Aft Deck on Wind Spirit

What Is a Cruise Ship "Flag Of Convenience" -- And Why Does It Matter?

Few cruisers know or care what country their favorite cruise ship is flagged in.

The names of different countries ranging from the Bahamas to Panama to the Netherlands to Italy are usually visible on the front of the ship; maybe you noticed it when you took a picture standing next to your vessel in port.

These "flags of convenience" are used for the majority of the world's passenger and cargo fleet -- and it's pretty rare to have the United States seen there.

That's turned out to be a big problem in 2021.  A year since the pandemic brought the travel industry to a halt, cruising has still not restarted in the United States, held up by orders from the U.S. Centers for Disease Control and Prevention that largely apply to foreign-flagged vessels.

The U.S. isn't alone: Australia has banned foreign cruise ships through mid-June 2021, and Canada has banned them entirely through the rest of this year and into February 2022. Meanwhile, locally flagged ships, which are generally smaller, are seeing the possibility of a spring start.

It all begs the question: Why does a ships' flag matter anyway? And why is changing the flag so difficult?

How Did Flags of Convenience Come About?

Under Prohibition laws that began in America in 1920, passenger liners registered in the United States could not legally serve alcohol, putting them at a substantial disadvantage to foreign competitors who could still allow folks to imbibe while onboard. To get around this, some U.S.-based passenger steamship lines

their ships in Panama, with the first two U.S. vessels reflagging to Panamanian registry in 1922.

Benefits began to add up. Operators found labor to be cheaper, restrictions less onerous, and tax implications reduced. When Prohibition ended in 1933, some U.S. operators never went back, and the practice caught on and became commonplace.

Now, 99 years after the first U.S. passenger ships transferred to Panamanian registry, it is a global health pandemic -- not abstinence from alcohol -- that is causing issues.

The bias against ships being foreign-flagged is not a new one.

Also known as the PVSA, the order dates to 1920 and focuses on the transportation of passengers from one U.S. port to another. The law states this can only be accomplished by a U.S.-flagged ship, unless a stopover is made at a "distant foreign port."

, the PVSA, "prohibits commercial vessels such as cruise ships from allowing passengers to board at one U.S. port and debark at another U.S. port."

Although updated over the intervening years, this legislation was crafted at a time when the U.S. maintained a strong merchant and passenger shipping presence in the world, and protections were needed to offer American companies a competitive advantage.

For the cruise industry, the PVSA has meant that the vast majority of itineraries departing from and returning to the United States need to call on foreign ports. A cruise from Boston to Maine needs to call on Bermuda or Canada before it can return. Cruises to Alaska have to stop in Canada. Caribbean voyages need to call on Caribbean islands.

The only lines that are exempt from this are small ship, U.S.-flagged lines like American Cruise Lines or UnCruise Adventures. And that's why those are among the only cruise lines that are likely to sail in Alaska in summer 2021, now that Canada has banned cruise ships from stopping.

The perception of "foreignness" was exploited at the very beginning of the coronavirus pandemic. Florida initially refused ships operated by Holland America Line and Princess Cruises to dock in the state because of their foreign flags, despite carrying American passengers and homeporting in Florida for several consecutive winters.

This sparked a public

-- how much money American-based corporations who flag vessels in foreign countries pay to the United States. The foreign flags kept the cruise industry from seeking bailout money during the pandemic, for example, as some members of Congress were vocal about not giving aid to companies that benefit from overseas tax regulations.

It also raised the unpleasant idea that a foreign-flagged ship should seek the help of its flag nation in a time of crisis, and not its homeported country, as the U.S. Coast Guard

, the majority of which homeported in the United States, to "stay away" and seek assistance elsewhere.

Why Can't Existing Ships Just Be Reflagged in the United States?

So with these problems, why can't cruise operators simply just reflag their ships in the United States? It's a complicated legal issue.

To be a U.S.-flagged vessel, that ship must be constructed entirely in the United States and crewed with primarily American crewmembers. It sounds easy but both of those conditions present unique challenges.

First, no American shipyard has constructed a large-scale passenger ship since 1958, when Moore-McCormack's

was launched from the Ingalls Shipyards in Pascagoula, Mississippi.

While U.S. shipyards are still highly experienced at building passenger ferries, smaller coastal ships, riverboats and commercial vessels, they simply do not have the same experience, procedures and processes in place as shipyards in Germany, Italy, France and Finland that construct much of the world's modern large-scale cruise passenger fleet.

Though the United States has very high standards for shipbuilding and marine safety, they are not necessarily better than those governed by the International Maritime Organization, which is headquartered in London and sets out regulations for shipping. The IMO also developed Safety Of Life At Sea standards that are utilized around the world.

The other problem -- one that Norwegian Cruise Line ran into when it was developing its American-flagged Hawaii operations back in 2004 -- is that finding qualified American crews willing to put in the hours and deliver the kind of service provided by international crews is easier said than done.

In the early days of its Hawaiian launch in 2004, the line

when it docked in Honolulu.

Plus, American wages cost more money, and in the cutthroat cruise business, that means fares would have to go up -- way up.  One only has to look at Pride of America's Hawaii sailings to see the difference in cost between a U.S.-flagged cruise and a foreign-flagged one.

Beyond labor, everything else required to keep a ship flagged in the United States is also more expensive. A 2001

article in the Baltimore Sun

notes the average American-flagged cargo ship costs $4 million more per year to operate than a foreign-flagged one -- and that's before two decades of inflation.

"The payroll costs more," states the article. "Taxes are higher. Insurance is more expensive. Ships must be built to the Coast Guard's exacting standards. Repairs must be made in expensive American shipyards."

The drydock issue is a big one. A ship flagged in the United States must return to an American shipyard to be serviced, refitted, or otherwise repaired -- something that would incur time, money and possibly risk safety for a global cruise fleet stationed outside the United States.

Penalties can be charged for repairs made at sea. Penalties are charged if a non-U.S. drydock is used to make repairs.

For ships based near the United States, these restrictions aren't an issue. For a cruise vessel deployed in Europe or elsewhere, however, sailing back to the U.S. to enact necessary drydocks or repairs is expensive, time-consuming and unnecessary.

While cynics like to point out that foreign flags are convenient to the cruise and shipping industries primarily for tax purposes, labor regulations and other considerations, not all flags are chosen just for cost.

Viking flags its oceangoing fleet in Norway, with the homeport of Bergen listed below each vessel's name at the stern. The debut of Viking Star in 2015 was the first time in a decade that a passenger ship had been registered on the Norwegian International Ship Register.

Some cruise lines have given up their home nation flag for a more flexible one. Cunard Line

, U.K. registry in 2011 for Hamilton in Bermuda simply so that captains could perform weddings onboard, ending 171 years of tradition.

Foreign Flags Not Likely To Go Away

Absent of any federal program to incentivize companies to build ships within the United States, foreign flagging is here to stay.  A century of maritime habits and experiences aren't likely to be undone in a matter of months.

What is equally clear is that, unless substantial changes are made to the PVSA, the issue of ships being flagged in foreign countries is also not going anywhere. That, in turn, will impede many cruise lines from offering itineraries calling on more U.S. ports of call, as time always has to be made to visit a "distant foreign port" to satisfy cabotage laws.

What COVID-19 and the cruise industry shutdown has done, however, is reveal an inequality in the way the United States treats the maritime industry versus other forms of travel.

Airplanes aren't turned away from U.S. airports because they were built in another country. Trains and trucks are able to run, regardless of where they were manufactured or who their crew or drivers are.

Until regulatory authorities in the United States are willing to modernize the PVSA, and encourage a domestic restart of the construction of large-scale passenger vessels, U.S.-flagged ships will continue to stay small, both in size and market share.