You may also like
Dismiss
17 Epic Cruise Fails (Reader Edition)
7 Ways to Get the Cruise Ship Photographer to Leave You Alone
Life Lessons Learned from 'The Love Boat'
How to Make Friends on a Cruise
50 Years of First Royal Caribbean Cruises
6 Cruise Memories That Will Warm Your Heart
Cruise Critic Members Shout Out a Few of Their Favorite Crew
Weaving 'Herstory': Q&A With the History-Making International Women's Day Cruise's Female Officers on Celebrity Edge
Why Germ-Zapping Robots and AI Technology Could Be the Future For Cruise Ships
Photos From MSC Cruises' Return to Sailing in the Mediterranean 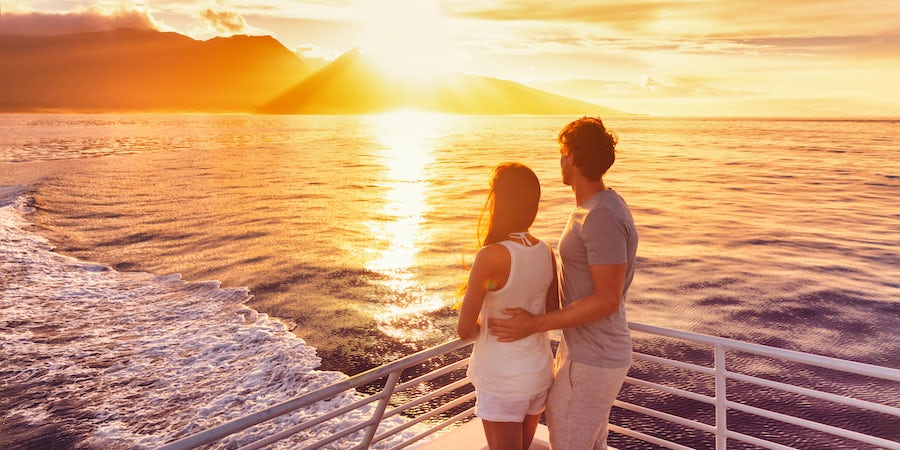 Couple on a Cruise (Photo: Maridav/Shutterstock)

Three Romantic Cruise Love Stories That Will Melt Your Heart

It doesn't have to be Valentine's Day to enjoy a good cruise ship love story, but it doesn't hurt. Plenty of crew couples are born from working together on ships, but we were interested in tales of passengers finding love when they were least expecting it. We scoured the internet to find romantic stories from soulmates found at sea. Here are a few of them (and if you have your own, please share it on our Cruise Critic message boards).

It's safe to call Ilene Weiner one of Princess Cruises' biggest fans. The Florida resident has logged more than 2,777 days sailing with the line since her first cruise in 1989, making her Princess' most-traveled cruiser.

Her love of cruising began with her first husband. After he passed away six years ago, Ilene continued to sail solo, or with family and friends, as it was a familiar environment. "I knew a lot of people on all the ships," she told Cruise Critic. "I spend a half a year or more onboard."

In August 2017, Ilene was traveling with her daughter on a seven-day Scandinavia cruise. She intended to stay on the ship even longer, as a friend was also onboard with a group. "I was going to spend the next 15 days with them at their table," said Ilene, who was 80 at the time.

Carl Cutting, then 76, was part of that group. Ilene first met him at the bar Crooners, with her daughter. The atrium bar became the regular gathering place for the extended group during the cruise. Over the course of the trip, "somehow we cut off from the group," as Ilene puts it, and romance bloomed.

After the cruise, there was one small problem: Carl lived in Oregon, far from Ilene's Florida home. The solution? More cruising!

Ilene had three October back-to-back cruises in Europe on Pacific Princess already set up. "We were emailing each other," she said. "And in the middle of the first one, he said, 'I'm so bored being home.' And I casually said, 'Well, why don't you see if you can get on the third segment I'm on.' And he did….he flew to Venice and met me for the last 12 days. And after that, we were together and anything we booked and planned, we did together."

The two continued meeting up for cruises around the world before their marriage in 2019 (which took place at the local courthouse, not a cruise ship). They spend the winters in Florida and the summers in Oregon -- that is, when they aren't cruising. The couple had been on the Princess World Cruise when it was cut short in 2020, and are booked for both World Cruises in 2022. They also have sailings booked this year, although the jury is still out on if all of them will go.

Ilene said that solo cruisers shouldn't sail thinking they will find someone. She recommends meeting up with other groups, choosing set dining tables where you sit with the same people all week and sitting at the bar to make friends. She leaves us with this:

"I remember when I first met him. We were sitting at the bar and I said to him, 'Oh, you're going to love me one day.'  He just looked at me. I said, 'Look, I didn't say you'll be IN love with me, but you'll love me. I'm a nice person.' And he laughed.

"My love story begins on the Lido deck of the Sensation, 1997," Crystal Link told Carnival Cruises Ambassador John Heald on Facebook. "Two single gals sitting at the pool bar, starboard side. My girlfriend sees two fellas walking out of the dining area sliding glass doors, port side. It was my future husband (Charles) and his friend. My future husband says, "look at the two blondes at the bar" (of course I couldn't hear him but I could read his lips.)  They never walked over to introduce themselves at that time.

After sailaway, I went back to my cabin and put on a swimsuit and came back to Lido to lay out. My future husband approached me and introduced himself. He was a handsome fella from Philadelphia and I was from Houston. Later in the evening, the future husband, Charles and his friend Eric saw me and my friend on the promenade after dinner. They came by our table and lingered.

Needless to say, they joined us and Charles and I both were smitten. Although we spent every day and evening together, we didn't fall in love until the last tender back from St. Martin. Charles planted a kiss on me I will never forget. We exchanged information and started commuting back and forth from Philly to Houston every other weekend for two-and-a-half years. He sold everything and moved to Texas and we've been together and married for 24 years. We cruise every chance we get and relive our Love Boat Romance."

Seabourn Cruises has a knack for setting solos up at tables designed for interesting conversation (that's why they are on our list of 7 Best Cruises for Solo Travelers). And that's where our next couple met.

Ros Russell discovered cruising in 2009, after the death of her first husband. The Australian booked a cruise sailing from Athens in October 2016, traveling solo.

Meanwhile, Derek Bell had lost his second wife at the beginning of that same year. The Englishman booked the same cruise -- as he puts it, "little did Ros and I know that the stars were bringing us together!"

On Halloween, the two, both 69 at the time, were seated at the same hosted table. "We enjoyed each other’s company and gradually over the course of the voyage. Aided and abetted by Seabourn Staff and other passengers we had a wonderful time," Derek wrote Cruise Critic. "The end came too soon but we realized that something special was developing between us."

Ros left the ship in Monaco to visit friends in Norway, while Derek stayed on. The two kept in touch, with Derek "pestering" Ros to meet up in England before returning to Australia. The two made plans to take a back-to-back cruises together the next March, from Manaus, Brazil to Fort Lauderdale, and then onto Barcelona.

"Although it felt like a long time before we would meet again, I was very happy to wait, knowing that I wanted Ros in my life," Derek wrote. "Little did I know that she was feeling the same." The two kept in touch every day, leading Ros' daughter to invite Derek to Melbourne to spend Christmas with the family.

"I couldn't get there fast enough!" he said.

The two confirmed how they felt at the beginning of their cruise. Derek proposed during a port stop on Devil's Island. The couple were married in Chester in Lancashire in September 2017. Their honeymoon? A Seabourn cruise from Rome to Sydney.

The cross-continent couple typically lives in England for six months over the summer and then spends six months in Australia's summers, punctuated by Seabourn cruises. They have been Down Under since the pandemic began and have no idea how long they will be staying.

"The disruption of the last 12 months has been difficult with restrictions for everyone," Derek wrote. "But I can say that since October 2016, ours has been a true love story, which we hope will continue for many years to come."