You may also like
Dismiss
India Golden Triangle Cruise Tour Tips
Why Germ-Zapping Robots and AI Technology Could Be the Future For Cruise Ships
Will I Have to 'Social Distance' on My Next Cruise?
Your Favorite Cruise Ship is For Sale? Here's Why You Shouldn't Panic
What Happens to Cruise Ships That Are Slated to Be Broken Up?
Step By Step: How to Submit Comments on Cruise to the CDC
Photos From MSC Cruises' Return to Sailing in the Mediterranean
What Is A Vaccine Passport -- and Will Cruise Passengers Have to Get One?
Will You Need a COVID-19 Booster Shot to Cruise in 2022? Probably
What Does the End of the CDC's COVID-19 Program Mean for Cruisers? We Tackle the Burning Questions 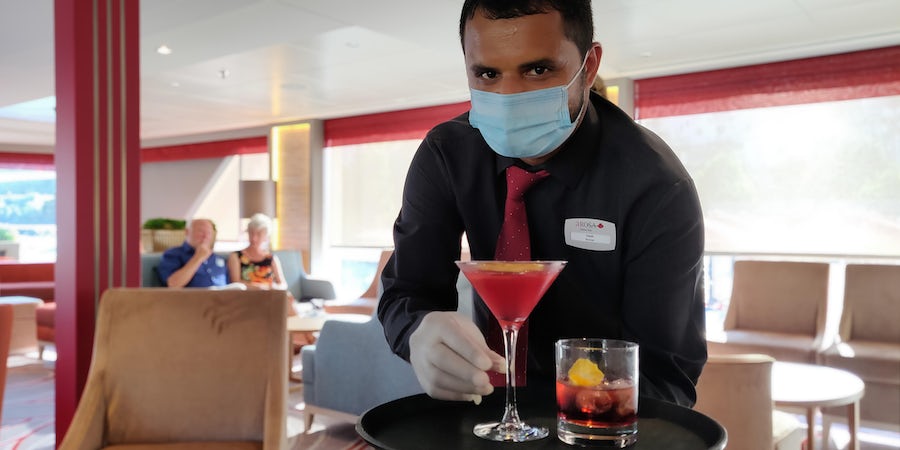 With vaccines designed to protect individuals from potential effects of COVID-19 hitting markets all over the world, cruise lines are beginning to seriously consider whether to mandate vaccinations for crew ahead of a return to operations.

Norwegian Cruise Line Holdings has become one of the first cruise operators to publicly state it would endeavor to vaccinate all of its crewmembers for COVID-19 before they start their contracts. The company, which counts Norwegian Cruise Line, Oceania and Regent Seven Seas among its brands, told Cruise Critic vaccinations for crew are just one aspect the line is considering as it endeavors to return its global fleet safely to service.

"We are exploring all options regarding vaccinations for guests and crew, and it is our intention that all crew members be vaccinated before boarding our vessels to begin their duties, subject to availability of the vaccine," a spokesperson for NCLH told Cruise Critic in an emailed statement.

"We will continue to partner with global and domestic authorities and the Healthy Sail Panel, our team of leading expert advisors, to explore all options necessary to protect guests, crew and the communities visited. We will share additional updates as they are available."

Vaccinating crewmembers presents an ideal solution for cruise lines, but the logistics of doing so are daunting. So, too, are financial and ethical considerations.

The shipping world is undergoing a crew change crisis. According to the

, a global shipping trade association, the continuing inability for operators to conduct crew changes as a result of the global health pandemic represents the biggest crisis for the shipping industry since World War II.

A half-million commercial seafarers globally have been caught up in the crisis, forced to remain onboard vessels because of lack of air transport and restrictions on docking and disembarkation from countries around the globe. (These figures represent the global commercial shipping industry only; much of the cruise industry is represented by the trade organization Cruise Lines International Association.)

Crew, whether onboard a containership bringing necessary goods or conducting minimum safe manning on the world's global cruise fleet, are not considered essential workers. And as such, they're shuttled to the back of the line in many countries' vaccination roll-out plans.

Because the cruise industry relies on international workers hailing from dozens of countries, the timeline for getting crewmembers vaccinated will likely vary wildly. Even within the United States, differing policies at a state level allow for an uneven distribution of vaccines. Multiplied on a global scale, those logistical challenges become more burdensome.

My Vaccine, or Your Vaccine?

There is also the question of which vaccine would be acceptable for crew to receive.

Many crewmembers aboard the world's global cruise fleet hail from Indonesia and the Philippines. The latter country has signed agreements to secure COVID-19 vaccines manufactured by

, Filipinos won't have control over which vaccine they are given. Currently, neither the United States nor the European Union recognizes the vaccines produced by Sinovac or the Serum Institute of India.

As of late January 2021, the European Union

vaccines produced by Moderna and BioNTech-Pfizer for distribution, guidance that is

by the U.S. Centers for Disease Control and Prevention. The CDC is also looking at granting approval for COVID-19 vaccines manufactured by AstraZeneca, Janssen, and Novavax.

The uncertainty over which vaccine Filipinos could receive is a scenario that could play out in numerous other countries around the world. It could also prove to be problematic as governing bodies like the CDC, Britain's NHS, and the European Union's Directorate-General for Health and Food Safety (DG SANTE) are likely to prefer or even mandate the use of some COVID-19 vaccines, like those from Moderna and Pfizer, over others.

At the outset, it would seem that one solution would be for cruise lines to purchase doses of vaccines themselves, to administer to crew at the start of their contracts, to ensure all crewmembers have been vaccinated to the same standards.

Currently, though, that remains easier said than done. Pfizer

stated it will not sell

doses to the private sector "for the foreseeable future," and other manufacturers are likely to follow suit -- at least for the meantime.

Though cruise lines could speak with manufacturers about securing the doses necessary to give every crewmember "the jab" somewhere down the line, doing so could generate significant negative press as people around the world worry about so-called "

In short: Not now, but perhaps as 2021 continues on this could become an option.

Vaccines to Play an Expanded Role in Restart Plans

Late last year, cruise line executives opined that vaccines, rather than additional protocols, would be the way forward.

"The arrival of highly efficacious vaccines is a game-changer," said Richard Fain, chairman and CEO of Royal Caribbean Group. "Previously, we expected cruising to resume based on creating a virtual bubble of safety on the ship, even if the rest of the country was experiencing significant spread. Vaccines change all that."

At the same time, Frank Del Rio, chairman of NCLH, had also stated his preference to have crew vaccinated, and perhaps even passengers as well.

Asked during Carnival Corporations fourth-quarter earnings call in early January about vaccines, President and CEO Arnold Donald said it was too early to speculate and deferred instead to ongoing guidance from the CDC.

"We want the freedom to operate, period," Donald said.  "So, we'll be focused on being in compliance with whatever CDC regulates. We give our inputs and offer our science and medical experts, but the CDC will make their determinations."

Then, there's the question over whether cruise lines, or any employer, can mandate vaccinations for passengers or crew.

Crew typically live and work in tighter quarters than paying passengers. Most crewmembers share staterooms of two to four per room, though some newer vessels do offer single-occupancy cabins. Crew typically eat meals in a shared mess, relax in shared facilities and generally interact in close quarters below decks.

For that reason, having some crew vaccinated and not others doesn't make sense. To be successful, the mandate to vaccinate has to apply to every crewmember onboard.

"It would be difficult for a cruise line to make an exception, even for medical reasons, without creating a danger to the other employees," said Susanne Hafer, Counsel for Sullivan Law.

Hafer also noted that cruise lines would not necessarily have to amend contracts to include the condition of vaccinations, telling Cruise Critic such a clause could be added as a new written policy.

Some lines are broadening their vaccination requirements to passengers as well. U.K.-based Saga Cruises became the first cruise line to mandate that all passengers must present proof of COVID-19 vaccination prior to embarkation.

The line, which caters primarily to British travelers over the age of 50, stipulates that all passengers must have been vaccinated for COVID-19 at least 14 days before boarding. The line moved its return-to-service date back to May 4 to allow passengers additional time to be vaccinated.

"The health and safety of our customers has always been our number one priority at Saga, so we have taken the decision to require everyone travelling with us to be fully vaccinated against COVID-19," a Saga spokesperson said in a statement. "Our customers want the reassurance of the vaccine and to know others travelling with them will be vaccinated too."

At this time, Saga is not mandating vaccinations for crewmembers. The line states it is continuing to follow all guidance from governments and local health authorities regarding the vaccination of crewmembers.

For some passengers, and undoubtedly crewmembers as well, many of the same questions linger: What if I can't get vaccinated fast enough? What if I don't have access to a specific vaccine? What happens if I am opposed, for whatever reason, to vaccinations?

It's too early to say what the answers to those questions are. What is certain, though, is that vaccinations are likely to continue to play a broader role in the industry's return to service, and that further discussions will likely be had around this topic in the months to come.