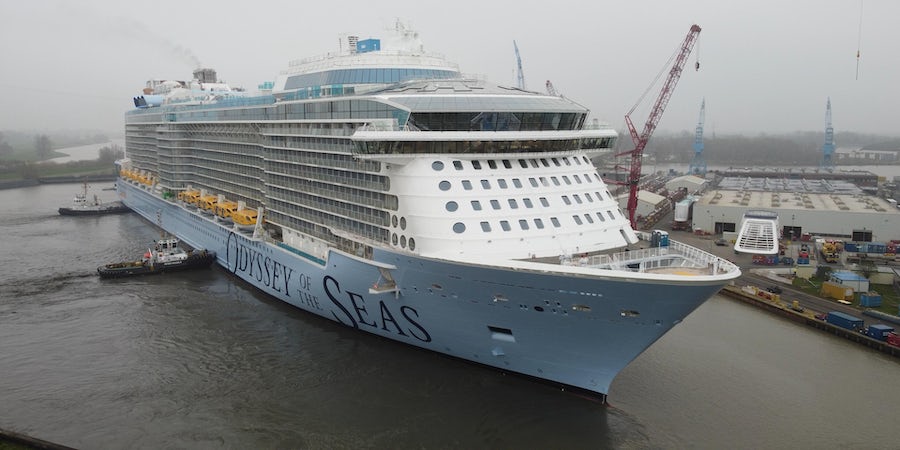 Photos of Royal Caribbean's Odyssey of the Seas Cruise Ship, Before its 2021 Debut

The debut of a new Royal Caribbean cruise ship is always an exciting moment, especially when we haven't had one for more than a year.

Odyssey of the Seas is the second Quantum Ultra class from the line, the first being Spectrum of the Seas, which launched in 2019.

The ship, which was set to debut in November 2020, is being built at the Meyer Werft shipyard in Papenburg, and was floated out in December.

Once the finishing touches are made to the interior spaces, the 4,180-passenger ship will then be towed backward (known as "conveyancing") along the River Ems to the sea where the ship will be put through its sea trials.

These include Sky Pad, a virtual reality trampoline experience; virtual surfing on the FlowRider; the popular Playmakers Bar and Giovanni's Italian restaurant.

The ship will also debut a brand-new show in Two70, Royal Caribbean's innovative, high-tech multipurpose theater space located at the stern of the ship: Oceanides, involving performers in tanks of water with various aquatic sea life.

Odyssey of the Seas will be based in Rome after it launches and sail a full season in Europe including itineraries to the Greek islands, before deploying to Fort Lauderdale in November 2021 for the winter.

We've managed to secure a mixture of photos of the near-completed ship, as well as some renderings of the indoor spaces.

The line's popular sports bar and pub is located within the SeaPlex complex on Odyssey of the Seas and offers up a variety of pub grub (chicken wings, burgers, sliders, fries, etc.) and ice-cold beers.

The SeaPlex on Odyssey will have bumper cars and trapeze classes, while the upper level will be dominated by a virtual reality playground for individual and group play, with augmented reality walls and floors. The lower level, which has the full sports court, will also double as a glow-in-the-dark laser tag course during select times.

Odyssey of the Seas Takes Shape

The ship is steered gently out of the dock where it has been constructed at the Meyer Werft shipyard, in Germany.

Clearly visible in the center of the aft deck is the FlowRider. Directly behind that you can see RipCord by iFly, a skydiving simulator; and to the left, the bright yellow dome is one of Royal's newer features -- SeaPad, a VR trampoline/bungee jumping experience.

The Ship Towers Over the Tugs

The 1,184-foot ship towers above the tugs used to pull it from the dock where it has been constructed.

A number of top deck features can be seen clearly here, from left: SeaPad, FlowRider, RipCord by iFly; the Climbing Wall, the pink bear – having an animal on the side of the ship is a signature Quantum Class feature -- and the main pool deck.

Royal Caribbean is rolling out this new take on its signature Italian trattoria, which offers up a menu of rustic Italian dishes, from hand-tossed pizzas fresh out of the oven to charcuterie, and beyond. The "wine" part of the menu features a wide selection of wines and limoncellos from many of Italy's well-known regions.

The pool deck will take up two levels and contain two open-air, resort-style pools and four whirlpools, all surrounded by lounge chairs, shady casitas and hammocks. Near the pools will be The Lime & Coconut, serving up two stories of pool-front views, liquid fun and live music from morning to night.

Towering above it all, the North Star capsule.