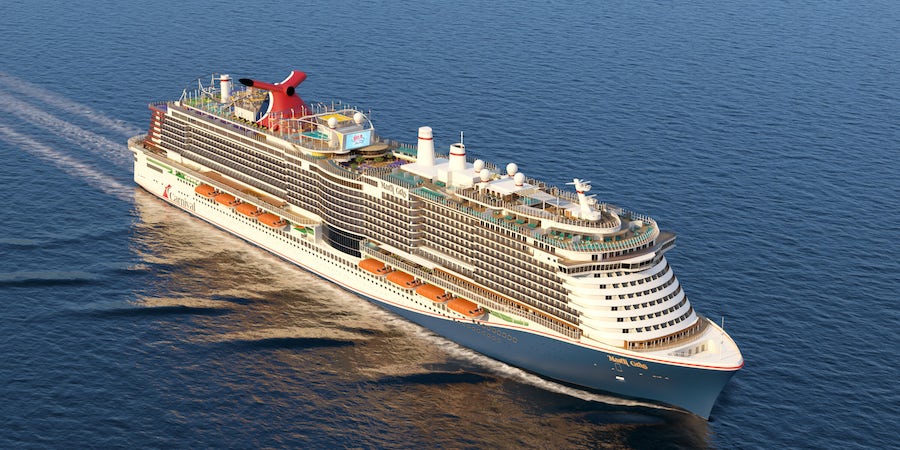 Photos of Carnival Mardi Gras Cruise Ship, Before Its 2021 Debut

As we enter 2021, excitement and anticipation is building for Carnival Cruise Line's newest vessel, Mardi Gras, slated to debut in the U.S. this year.

Carnival took delivery of the 180,000-ton ship, named after Carnival's Mardi Gras of 1972, in December 2020 in a virtual ceremony held at the Meyer Turku Shipyard in Turku, Finland. The ship will be the first vessel in the Carnival fleet to be powered by liquefied natural gas, or LNG, technology.

Mardi Gras has now begun its journey towards North America for the first time. In December, it sailed for Rotterdam where it bunkered with LNG for the transatlantic crossing before proceeding to Barcelona, Spain. It is expected to make its Atlantic crossing sometime in January 2021.

For Carnival cruisers, the 5,200-passenger Mardi Gras represents an exciting new chapter. Mardi Gras is an entirely new class of ship, unlike any other Fun Ship afloat, and introduces a new livery of blue, white and red, along with a flourished name represented in a similar font to that of the Mardi Gras of 1972; a vessel that formerly sailed as Canadian Pacific's Empress of Canada.

Here are some of the other new features, along with photos:

Chief among the new features aboard Mardi Gras is BOLT, the world's first-ever roller coaster at sea.

BOLT will race along an 800-foot airborne track situated 187 feet above sea level, with the roller coaster's electric, motorcycle-inspired cars travelling at speeds of up to 40 miles per hour.  Each car can seat two people, and passengers will have control over their own speed as they dip, drop and turn along the track, which includes a hairpin turn around the ship's iconic funnel.

Cameras placed along the track will also capture riders' journeys, and commemorative photos can be purchased, in true amusement-park fashion, as a memento of the experience.

Mardi Gras will also debut a brand-new atrium concept for Carnival. Spanning three decks in height, the Grand Central Atrium will be flanked by walls of glass windows and will be situated along the starboard side of the vessel.

Designed to be a café, bar and gathering spot by day, the Grand Central Atrium turns into a show lounge at night, offering immersive performances each evening.

Bars will offer custom cocktails that are inspired by and change with the entertainment on offer each evening, while light bites will be offered for the first time at JavaBlue.

"It's entirely a departure from anything that we've ever done," Carnival director of newbuild product development Glenn Aprile told Cruise Critic in an interview. "As far as I know, I think this is the first atrium that's been placed on the side of a cruise ship. Most typically, Atriums run down the center of the ship."

Passengers will be accommodated in 2,600 cabins and 180 suites that span 11 different categories of accommodation. These include standard inside, outside and balcony staterooms, all done in a refreshing new style of décor for the line that focuses on light blues and other sea colours instead of the heavy browns and reds that graced past staterooms.

Mardi Gras, however, also kicks things up a notch when it comes to suite selection. Long a weak-point on Carnival ships, Mardi Gras boasts more suites than other Fun Ships to-date, including the Excel Presidential Suite that offers separate living and sleeping areas, a dining area, and a hot tub mounted on the included wraparound balcony.

The line's popular "Havana Cabana" Cuban-themed suite return aboard Mardi Gras as well, as part of the Havana collection of cabins, suites and public areas that include exclusive access to the Havana Bar & Pool.

Carnival's Chief Fun Officer and NBA Hall of Famer Shaquille O'Neal will debut his own Big Chicken Restaurant aboard Mardi Gras. The complimentary venue, which serves up breakfast, lunch and dinner items culled from O'Neal's family recipes, was scheduled to debut aboard Carnival Radiance. With that ship's conversion from Carnival Victory delayed into Fall 2021, Mardi Gras will likely be the first vessel to offer this casual eatery.

Another new venue, Street Eats, rolls out casual street fare like empanadas, while the RedFrog Tiki Bar makes its debut aboard Mardi Gras.

Also returning are Guy Fieri's onboard burger joint and smokehouse, which have been established in recent years as two of Carnival's most successful specialty venues.

When cruising resumes, Mardi Gras will operate weeklong Caribbean itineraries from Port Canaveral, FL. Carnival notes it has worked closely with authorities at Port Canaveral to design and build a new cruise terminal capable of accommodating the size and LNG-fueling process required by Mardi Gras and other Excel-class ships.

"We have been working tirelessly this year to get to this exciting day to take delivery of this beautiful ship, and the team at Meyer Turku has been an outstanding partner throughout this process," said Christine Duffy, president of Carnival Cruise Line. "I cannot wait for our guests and crew to see and experience Mardi Gras.  Notwithstanding the delays related to the pandemic, there is tremendous enthusiasm and pent-up demand for this ship."

Mardi Gras will also have a sister ship joining the fleet in 2022, complete with another "throwback" name: Carnival Celebration.

"Next we will work on the development of her sister ship, Carnival Celebration, which arrives in 2022 and has sold very well since inventory opened in October," said Duffy.

Mardi Gras is currently scheduled to embark on its maiden revenue voyage on April 24, 2021.