You may also like
Dismiss
20 Cruise Movies That Will Make You Want to Sail
Flyboarding in the Caribbean in St. Thomas
Q&A with Carnival Spirit Band Music Manila
10 Things to Do on Queen Mary 2
Cruise Gives Teenagers First Taste of Freedom
10 Things Single Parents Should Know When Cruising With Their Kids
Pictures From the Turner Classic Movies (TCM) Cruise
6 Cruise Memories That Will Warm Your Heart
Weaving 'Herstory': Q&A With the History-Making International Women's Day Cruise's Female Officers on Celebrity Edge 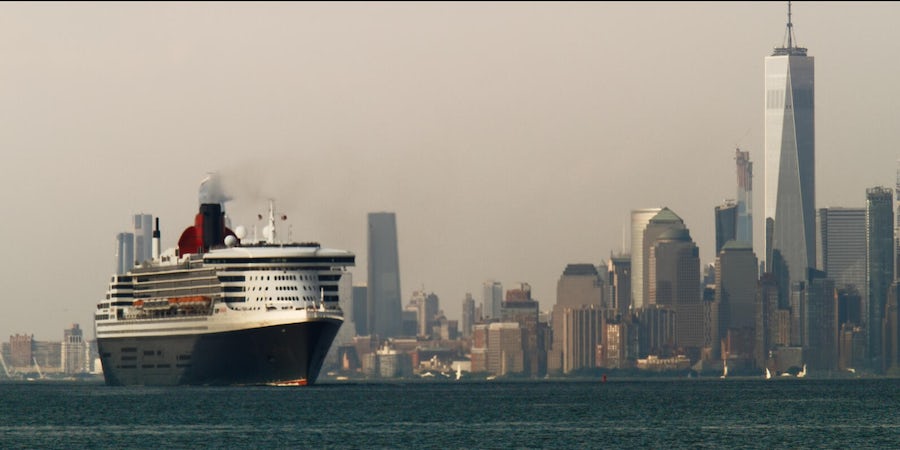 Lose Yourself On a Queen Mary 2 Crossing, Through HBO's Let Them All Talk Movie

(5:05 p.m. EST) -- Those who miss the long meandering sea days of a transatlantic crossing on Cunard's Queen Mary 2 can relive that feeling with the new movie "Let Them All Talk."

The film, which stars Meryl Streep, Candice Bergen and Dianne Wiest as old friends reconnecting on a week-long QM2 cruise from New York to Southampton, debuted December 10 on HBO Max. The movie, which was directed by Oscar-winner Steven Soderbergh, lets the stars do just that -- talk -- in some of the liner's most well-known locales.

The library, planetarium, Royal Court Theatre, the Pavilion Pool and even the disco get moments to shine, and it's impossible not to covet breakfast in Streep's stateroom, the 1,600-square-foot two-story Windsor Suite. The film also shows supporting cast Lucas Hedges and Gemma Chan sipping cocktails in some of the liner's more glamorous lounges and taking long walks on the decks. After months of lockdown, it's a sight that will not only make you wish you were onboard, it will make you realize how lucky you were to cruise in the first place.

Simon Palethorpe, president of Carnival U.K., was onboard during the August 2019 filming. Cruise Critic caught up with him to talk about the project and how the cruise line worked with Soderbergh and the staff to get the movie made in just a few short days. The interview has been condensed and edited for clarity.

Cruise Critic: What I loved most about this movie is that it unfolded in the same way as a transatlantic cruise. I really thought they kind of captured not only the look of Queen Mary 2, but also the feel of being on a cruise like that, where it's just a week of sea days and people are discovering the ships -- and then in this case discovering themselves or other people. I don't know if the director intended really to capture the feel of a cruise ship, but he did.

Simon Palethorpe: It was, very much. We talked about that with them, both beforehand and when they were on board, and actually, I think all of the cast, as well as the director, producers and so on, I think they all settled into a bit of a rhythm as well. Although, I must say, they were working really hard because this was a film that had a time limit on it like no other.

CC: I wanted to dive into a little bit of the partnership that evolved between you and the film's director. Did he already know what spots on the ship to feature or did you help him with that location scouting? Because there's some great shots of those iconic QM2 places like the library, the planetarium, the pool.

SP: It was collaborative, both before and during. The interesting thing was as they were wandering around the ship, Steven and some of his team would say, "Hey, this is a great venue. You know, we could do something here." So, I think that was one of the things that was just incredible about the whole event was the way in which Steven and his team did a lot on the fly. It was extraordinary. They were trying to achieve something in seven days that they said would normally take them months.

CC: Did he have an opportunity to tour the ship before the crossing? So they knew that there might be some places they could stage different shots?

SP: Certainly the team had re-conned the ship previously. Absolutely.

CC: What was the process like in shutting off the ship so you could do the filming? Were people on the ship, the passengers, were they made aware that there was a major filming effort going on?

SP:  We said to people, "Hey look, we are doing some filming, there will be a little bit of disruption." The odd venue closed off here and there at certain times, but we would shoot in a venue out of hours. You'll see a shot of them having a fabulous meal for dinner, and actually, they were filming at about 3:30 in the afternoon.

At the beginning of the week, we said to our 2,500 passengers, "Hey, if you want to be an extra, please let us know." At the beginning it was, 50 or something volunteers, but by the end, we were getting close to 1,000 people having expressed an interest.

CC: So you really had to winnow it down?

SP: It created a buzz. There was definitely a buzz around the ship that was as a consequence of, one having a film, but having these amazing stars on board as well.

CC: Did people know that Meryl Streep and Candice Bergen were walking among them? (Here's a thread from the Cruise Critic archives that has some notes from QM2 passengers who were onboard the sailing).

SP: Yes, absolutely. ... And the guests were remarkably respectful. It was actually a very nice dynamic that was struck up on board.

CC: I wouldn't imagine that Cunarders would be the type to pester a celebrity. They'd probably be pretty respectful, I would think. ... Do the director or did the major celebrities express that they'd had an experience in cruising before?

SP: I think Meryl has sailed previously. I think they settled into it really well. Although, I've got to say, they worked so hard. I mean, they worked morning, noon and night. I hope they got to see a little bit of the ship and enjoy a little bit of the hospitality we had to offer.  We gave them a bit of a party towards the end to celebrate. Nonetheless, they weren't relaxing on board, they were full belt working.

CC: Did they consult you on the use of the different terminology, saying the ship or the liner, as opposed to calling it a boat? There's some scenes in there where they bring that up. Did you help with some of that?

SP: Yes, I gave them a little tutorial at the beginning about the nomenclature that goes with the crossing and they decided, "I think that it would be fun to weave some of that stuff into some of the narrative." There's a point where they talk about the crossing and they talk about ship rather than boat and that was all stuff that we'd had some fun with in the early parts of our conversations.

CC: What has the reaction been to people who have seen the movie? Are you hearing from Cunarders about it?

SP: Not an awful lot yet. It's very early days. I've had a couple of emails from people saying they love it and so on, but it's USA-only at the moment, So, all of our U.K. guests, which is our biggest audience, haven't yet had an opportunity to see it. If there's one question we ask Steven, his team and HBO Max frequently is, "When's it coming to the U.K.? When can it go to Germany? When can it go to Australia?" These are our other big markets for Cunard.

CC: It does present cruising as a very relaxing bubble unto itself. Right now, I think that that sort of vibe would resonate with people who have been at home for so long. What takeaways do you think that the viewers are getting about cruising from the movie?

SP: It's a reminder of cruising, and certainly Cunard, as being a great way to get away from the stresses and strains of everyday life. I think that's particularly poignant at a time when we're in this pandemic, where I think people do feel stressed quite a lot of the time. There's so much uncertainty out there at the moment that does bring on stress in almost whatever you do. The crossing looks like the perfect antidote.