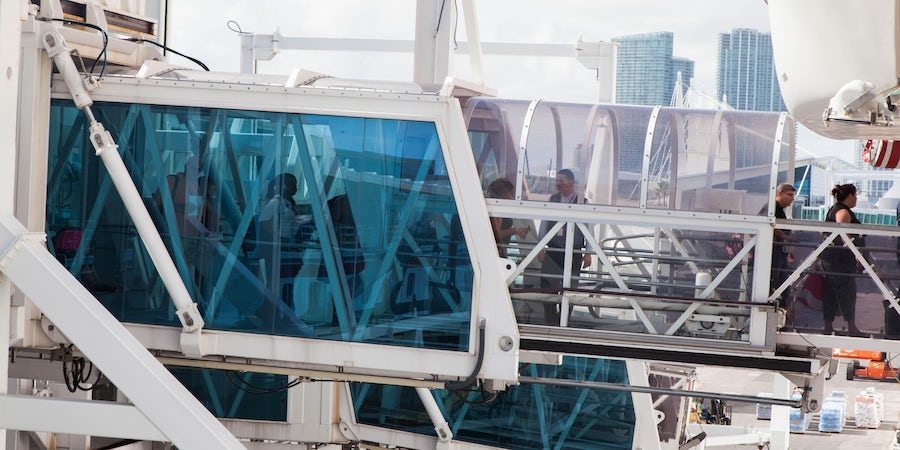 How Cruises Might Change: Getting On and Off The Ship

The standard embarkation and disembarkation process that cruisers have come to know (and expect) will likely change once cruise lines return to limited operations, under the guidelines mandated by the U.S. Centers for Disease Control and Prevention (CDC)'s Framework for Conditional Sailing released last week.

While cruise lines have not publicly commented on what this process will look like, there are already several clues as to how getting on and off the ship may evolve, as the COVID-19 testing requirements precautions relating to the COVID-19 coronavirus pandemic stand to affect this process perhaps more than any other aspect of the cruise vacation.

Cruise Critic had posed a number of questions to the CDC earlier this week relating to the new Framework for Conditional Sailing released last Friday. The CDC acknowledged Cruise Critic's questions, while stating that specific details were still being hammered out by the agency.

"Further information about restricted voyages will be outlined in future technical instructions and orders," a CDC spokesperson told Cruise Critic in an email.

This is what we know about the process so far:

The days of turning around a ship in one day -- provisioning, cleaning and embarking a new group of passengers within hours of the vessel concluding its previous voyage -- may be numbered, at least in the United States.

Ships typically arrive in the early morning hours, terminate the voyage, disembark all existing passengers, then re-provision and embark passengers for the next voyage and set sail, all in the same day.

Under the CDC's new guidelines, this 12-hour turnaround time that cruisers have become accustomed to may become -- at least temporarily -- a thing of the past.

We already know that there are two major requirements that will lengthen the embarkation process: testing and staggered boarding.

Staggered boarding has been something cruise lines have been testing out for years. It has rarely worked: passengers frequently disregard boarding zones and times printed on boarding passes and show up at the terminal early, hoping to be onboard before lunch is served.

The application of these boarding zones has been inconsistent in Cruise Critic's experiences, with some terminals and staff enforcing them, while others simply wave passengers of all zones into the queue.

Expect this to become much more rigid going forward. Passengers will be given an embarkation zone, or time, and will likely not be let into the terminal until that given time.

If that sounds egregious, there is precedent for it: some airports, like Fort Lauderdale or Bali Denpasar, won't even allow ticketed passengers past security or into the terminal until a few hours prior to departure.

This staggered approach will be even more important due to the number of new steps that will need to be taken prior to embarkation. In addition to the standard security screening and passport and check-in formalities that have to be completed prior to the issuance of a keycard, cruise lines will now be required to conduct screening and testing at embarkation.

Screening, as defined by the CDC's order, requires lines to "screen passengers and crew before they embark for signs and symptoms or known exposure to COVID-19, and deny boarding to anyone who is suspected of having COVID-19."

Cruise lines are also required to "conduct laboratory testing of all passengers and crew on the day of embarkation…in accordance with CDC technical instructions or orders."

That will all take time, particularly for larger vessels carrying more passengers and crew.

How much time, though, is heavily dependent on the CDC's instructions -- details which the organization is still hammering out.

The days of queuing up in the atrium at seven in the morning to catch that 10 a.m. flight home will likely also go away.

The CDC's orders mandate that laboratory tests are also conducted of all passengers "the day of disembarkation."

Under that guidance, passengers would -- presumably -- have to wait onboard for their test results to be reported back and the all-clear is given.

Because it would be unfeasible to transport over 1,000 passengers to shoreside hotels, this will likely entail spending a day, or even an evening, onboard the ship while it is tied up in its homeport before passengers are authorized to disembark.

The CDC also states it may also require "post day of disembarkation laboratory testing of passengers and crew."

But the agency has issued no guidance on how post-disembarkation COVID-19 testing would work, including where passengers would be housed, tested, or who would be on the hook for any associated costs.

One line -- SeaDream Yacht Club -- is already planning on testing passengers at disembarkation aboard its SeaDream I sailings out of Barbados -- at the request of passengers.

"A while back it was decided that we are doing PCR testing both on embarkation and disembarkation," writes SeaDream's executive vice president, Andreas Brynestad, on a thread on Cruise Critic's message boards.

"The reason for doing the PCR test also on disembarkation was that some guests are staying in Barbados and others have reached out to us and asked if this was possible as it was required upon their return home.

"I am not saying that things won't change, we do live in a world that is very fluid, but we are very confident that we will be able to provide an excellent SeaDream experience for everyone."

It is worth noting, however, that even at maximum capacity, SeaDream I holds just 112 passengers. This makes rapid disembarkation testing much more feasible for vessels of this size.

How This All Differs from Europe's Cruising Restart

In the summer, MSC Cruises issued its return-to-service guidelines that included testing swabs at embarkation, contact tracing, masking, and a variety of other provisions that have been successful at preventing the spread of COVID-19 aboard the line's Mediterranean sailings.

Based on the European Union's Healthy Gateways guidance, MSC has been able to test passengers effectively at embarkation before boarding the vessel, while MSC's "MSC for Me" digital wristbands have been used for voyage contact tracing.

The EU has also provided cruise lines with a degree of flexibility in implementing these procedures, which had led to the restart of sailings aboard big-ship lines Costa, AIDA and TUI.The CDC's framework, however, does not allow for any degree of latitude on the part of the cruise line.

That lack of flexibility -- right down to dictating the subject line of emails to the CDC that cruise lines must use in all correspondence -- opens the door up for difficulties as the industry seeks to restart.

Embarkation will likely be a tightly-controlled, staggered process that will last for much of the day.

Based on the CDC's testing requirements, passengers will likely spend a day docked back in their port of embarkation, undergoing another round of COVID-19 testing.

Once those passengers are cleared, it is likely the ship will spend additional time -- from hours to a day -- undergoing standard cleaning and disinfecting procedures. If one voyage ends on a Friday, it may be that the next cruise doesn't depart until Sunday or Monday.

That, in turn, will affect itineraries, at least in the early days of the resumption of cruise.

Though it likely won't be this way forever, cruisers should prepare to be more flexible when it comes to the early cruises of 2021 -- particularly out of any port subject to the CDC's jurisdiction.