You may also like
Dismiss
Best Eastern Mediterranean Shore Excursions
How to Rent a Scooter or Wheelchair for Your Cruise
Nassau Highlights Tour in the Bahamas: Shore Excursion Review
8 Exhilarating Shore Excursions
50 Years of First Royal Caribbean Cruises
6 Cruise Memories That Will Warm Your Heart
Cruise Critic Members Shout Out a Few of Their Favorite Crew
Pictures From the Ultimate Disco Cruise
Virtual Cruise Trip Report: Onboard a Cruise Critic Member's "Fake, Made Up and Completely Impossible" Cruise Itinerary
Photos From MSC Cruises' Return to Sailing in the Mediterranean 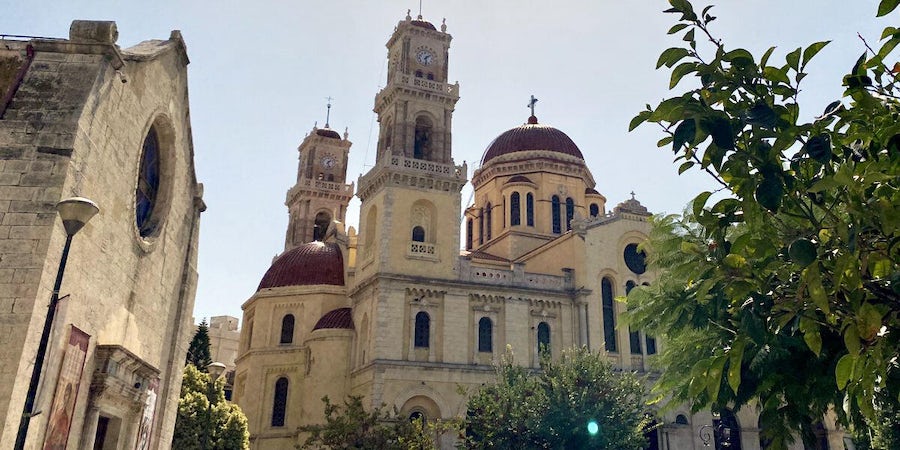 As cruise ships return to service, most are requiring passengers to take ship-sponsored excursions, to keep people in a safe "bubble" and also protect the port communities where they stop. The new requirements had us wondering -- are these excursions any good? And will exploring with a group be as fun or as interesting as being able to wander on our own?

Luckily, Cruise Critic has members who answer these questions for us. In a lengthy trip report, member Miaminice reported live from his Greek Isles cruise on Mein Schiff 6, a German-language cruise ship run by TUI (which has Royal Caribbean Group as a partial investor). The cruiser, who lives in Germany but also spends time in Florida, gave detailed accounts about three excursions that he and his wife took on their recent cruise.

Here are some of the highlights from his report (the full thing is well worth reading, for information on how the line handles masks, the pool, dining, social distancing and much more).

The first tour that Miaminice took: An e-scooter tour in Athens. "The cruise line did not take advantage of the situation" he said. "Tour prices are very reasonable. We paid around 40 Euro."

The process was efficient and easy, he said, with the meeting point for each tour listed in the daily cruise planner or given to you before the cruise. "Since it's a German ship, everyone was on time," Miaminice said. "The group only consisted of 10 people."

Once people gathered, the guide explained the procedures: "stay together as one group, do not wander off, wear masks where masks need to be worn, sanitise your hands often." He carried a large bottle of sanitzer with him, which was used often during the excursion, Miaminice said.

Before passengers went off the ship, crew scanned their temperature -- a log is kept of each passenger, every day, Miaminice noted. Learning to use the scooters only took a few minutes, and they were loaded onto a bus for the drive into Athens. "Yes, masks had to be worn on the bus," Miaminice said.

The streets of Athens were uncrowded compared to previous visits, Miaminice said. "It was a sweet & sour feeling. Nevertheless, we enjoyed the ride and sights on the way."

The three-hour excursion included several talks at different stops, The guide did ask the group if they wanted to buy souvenirs or drinks at the local shops.

"As long as he knew where we were, this was perfectly fine. Also we could step away from the group to take a few photos," Miaminice said. Communication is key; a few weeks earlier, the ship had sent two people home who left an excursion to get a beer. When people came back from shopping, the guide reminded them to wear a mask and sanitized their hands.

"By now you might think 'this is not so restricted at all.' And you are right!" Miaminice said. "Actually this is how it should be on any tour -- Covid guidelines or not. It was really pleasant!"

In Corfu, Miaminice also wanted to spend the day outdoors in the fresh air. He and his wife signed up for a ship-sponsored e-bike tour.

"The procedure was the same as the last time. We met at the excursion desk, checked in, received our helmets and rucksacks and, punctually at 9 o'clock, our group of twelve went down to the gangway where our temperature was checked and registered. Our bikes were parked in front of the ship already. Before we started the tour, our guide explained the procedures and guidelines and the dos and don'ts once more."

The excursion was similar to the previous one, where the group would ride for a while, before making stops where the guide could give information and background. Time was given for photos and even an hour-long stop at a bar on a small, deserted pebble beach. Hand santizer was given at every stop; "we got so used to it, that I didn't even think of it," Miaminice said.

When the group cycled through Corfu town, "we were surprised to see the town full of tourists. It was hard to believe that there would be even more hustle and bustle during normal times," Miaminice said.

Over dinner, Miaminice and his wife discussed the excursion. "We both agreed that again we had not felt limited at all. And despite not favouring tours organised by the cruise line we had really enjoyed the day."

He also noted that a morning and an afternoon tour were offered in each port. So if someone wanted to stay off the ship the entire day, they would be able to do so.

Miamince and his wife took this tour after debarkation, before catching their flight back to Germany. "Since we didn't feel like hanging around at the airport for hours, we had booked a transfer tour with the cruise line."

The couple boarded a bus, which took them to several sights around Crete, such as the Palace of Knossos. "After her tour, she gave us some free time. As long as we adhered to the guidelines, stayed within the area and did not enter or sat down in one of the restaurants we were allowed to shop, buy beverages etc. Just like during the previous tours we did not feel restricted at all."

The tour continued to Heraklion, where the couple learned more about Crete before the bus took them to the airport.

Miaminice said that his experience with the ship-sponsored shore excursions was much better than he thought it would be.

"Although this would not be the way we would like to do all our cruises in the future, I hope that we managed to let you know that despite of all the changes and circumstances we still very much enjoyed our cruise," he said.

"As much as we'd like, we can't just press a button and make Covid disappear. So we will have to make do with what's possible or not cruise at all. These first cruises are baby steps on a long way up the hill."