You may also like
Dismiss
MSC Cruises History
Why Germ-Zapping Robots and AI Technology Could Be the Future For Cruise Ships
Will I Have to 'Social Distance' on My Next Cruise?
Photos From MSC Cruises' Return to Sailing in the Mediterranean
10 Reasons Why a Maine Windjammer Cruise Is Perfect During the Pandemic (and Beyond)
Just Back From Alaska: Traveling On Our First Cruise, Vaccinated and Ready to Go
What Will U.S. Cruise Ships Look Like When They Return? Unpacking The Latest CDC Rules
Our Top Tips To Prepare For a Cruise in the COVID-Era
Got COVID-19 Testing Anxiety Before Your Cruise? So Do We. Our Top Tips
Post-Covid Cruising: How Close to Normal is Cruising Right Now? 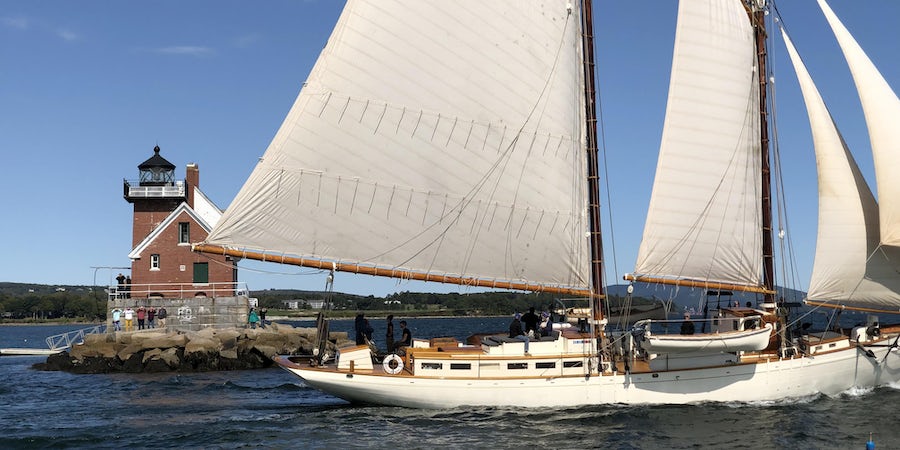 How I Conquered My COVID-19 Fears -- and Went Cruising Again

The schooner Stephen Taber rounded the granite point of the Rockland Breakwater Lighthouse, its sails billowing in the salty air. From the deck, I looked out toward Penobscot Bay, took a deep breath and started smiling.

After a six-month hiatus, I was back on open water, doing what I love: cruising. Seeing new sights. Meeting new people. And taking all the experiences back to share with others.

My journey to get back onboard a cruise ship, after the COVID-19 pandemic shut down all sailing in mid-March, has not been an easy one. As of this writing, Stephen Taber and its sister ship Ladona are the only cruise ships of any sort sailing in the United States. (The small size of the historic vessels puts them under the limit of the Centers for Disease Control and Prevention regulation).

For many, returning to the seas requires working through the mental barriers that come with new protocols that have become necessary to safeguard public health during the crisis. Just as with anything we do these days -- going to a restaurant, venturing to shops, attending small gatherings -- traveling and cruising requires a decision-making process that is unique to each person. One thing that the pandemic has taught all of us is that my choices are not your choices.

Perhaps my choices, however, can provide some guidance or assuage some fears as you make your next booking or think about your next cruise.

I caught COVID-19 in mid-March. Travel hadn't been curtailed at that point, and so my footprint from late February and early March resembles what would later turn out to be a jarring map of COVID hot spots: New Orleans right before Mardi Gras, a theater outing in New York City in late February, and a flight and a hotel stay in Miami before a rock music cruise in the Caribbean.

My illness presented as mild, with no fever. At the time, I was ineligible for testing, as cities went on lockdown, and swabs were reserved for workers on the front lines. Still, mild in COVID terms can mean different things to different people. My husband developed a dry cough, and that's it. We both lost our senses of smell before that was even a listed symptom.

For me, the virus showed up first as extreme exhaustion, then later as a heavy feeling within my chest, coupled with insomnia. Unable to get my doctors to take things seriously without a fever, I kept a pulse oximeter nearby, along with a blood pressure cuff and thermometer; luckily, I never dropped to the danger zone to require an ER visit. After two weeks, things seemed to clear up.

Until they didn't. About six weeks after my initial illness, pain in my chest resurfaced, along with weakness and fatigue. I went from regularly running two miles to getting tired going up our stairs. Despite exhaustion, I couldn't sleep through the night without aid. An antibody test in late April proved that despite my doctors' diagnosis, I had indeed had COVID-19 -- and was on my way to becoming what is now called "a long hauler."

All in all, my trip on the corona coaster -- where you feel great for a few days, followed by quick relapse -- went on for about five months. The virus reactivated mononucleosis, as evidenced by Epstein-Barr tests, even though it had been 30 years since I had it. At its worst, I wondered whether I would ever feel better again.

But I vowed that if my health came back, I would do whatever I could to get back to a life where I made decisions based on weighing risks smartly, rather than knee-jerk fear. For me, that means traveling and cruising, when the circumstances are safe. And it also means taking the virus and preventative measures such as masking, testing and social distancing extremely seriously.

Once you've survived long-haul coronavirus -- or much worse, had a loved one die from it -- you know it's not a hoax.

Covering the cruise industry these past six months has also been a rollercoaster. Demonized early on, often for circumstances that were beyond their control, the cruise lines have gone back to the drawing board to re-imagine an experience that has always thrived as a group activity.

Europe has led the way, with some lines returning to the seas in Norway as early as June. As the summer wore on, we saw some mistakes made. Focusing primarily on surfaces, for example, ignored the later findings that the virus spreads mainly in the air, requiring ventilation changes. Temperature checks make people feel good but would never catch asymptomatic carriers. Ignoring cases and becoming embroiled in an outbreak, as what happened with Hurtigruten, damages not just your brand but the entire industry.

What's been more exciting are the successes. In July, MSC Cruises took what was then a bold stand and implemented strict protocols for passengers and crew, including rapid response COVID-19 testing at the terminal before boarding (with secondary PCR testing in case of a positive); mandatory mask wearing in public spaces; social distancing on the ship and ship-sponsored excursions to keep people in a "bubble" when they are ashore.

Some called the measures extreme. But so far, they have worked -- so much so that Costa Cruises adopted similar rules when they resumed sailing this month (they also resonated with Cruise Critic readers, the majority of whom are looking to return safely to cruising). They also dovetail the recommendations put forward by Healthy Sail, a collaborative confab of scientists and experts spearheaded by Norwegian Cruise Line Holdings and the Royal Caribbean Group.

The group is careful to point out that nothing is foolproof. Tests occasionally produce false positives, so the ability to test multiple times is necessary. Relationships need to be built with health authorities and ports, so suspected cases can be isolated and off-loaded. Itineraries need to be flexible, to avoid hot spots.

But bubbles have been built on land, for sports events such as the NBA and tennis' U.S. Open, for college campuses where students socialize within pods and on production sites for television shows such as the "Great British Baking Show." If everyone within the bubble agrees to the rules, cruising should be able to resume in a limited way, just as those industries have.

The bubble concept is what drew me to Stephen Taber as my first cruise back. Part of the Maine Windjammer Association coalition, the captain of the National Historic Landmark ship had decided that he would hold a 149th season -- with safety measures that went beyond what the state of Maine required.

What sold me that the ship was ready for sailing was the mandatory COVID-19 testing requirement for all passengers, not just those coming from the states deemed high-risk. The protocols put together by owner-captain Noah Barnes were also reassuring: reduced capacity, cold ozone linen cleaning and increased turnaround time between sailings, masks when necessary and socially distant shore stops focused on the outdoors, not big ports. Almost the entire trip took place outdoors, from eating meals to daytime lounging, making it a perfect pandemic trip. (Luckily, the weather, while chilly, was bearable.)

Our bubble worked; the trip seems to have gone off without a hitch. It felt good to be back on a boat; I hadn't realized how much I missed the camaraderie of a cruise, the excitement of a new destination, appreciating the artistry of onboard chefs, meeting strangers who would become friends.

As the continual coronavirus numbers show, however, the United States is not out of the woods, yet. As the industry looks toward restarting in November, I will be just like all the cruisers out there, measuring what the cruise lines are doing against the danger of contacting coronavirus, again. I'm not going to be fearful, but I'm also not going to be foolish.

What I've seen from Europe and in the Healthy Sail recommendations -- the masks, the rapid testing at the terminal, the social distancing, the contained shore excursions -- make sense. My Maine cruise has taught me that you can still have fun while staying safe.

If the cruise lines stick to the science-based approach that they've been espousing, with protocols as strict as Europe, I'll be right there on the Lido Deck at sailaway, breathing in the salty air again, a smile on my face.