You may also like
Dismiss
Kenai Peninsula Cruise Tips
Azores Cruise Tips
11 Reasons to Take Your Family on a P&O Cruise
Solomon Islands Cruise Tips
The Best Month to Cruise Hawaii
Things to Do in Southampton Before a Cruise
Chesapeake Bay Cruise Tips
Princess Cruises' Discovery at Sea Program
Taster Cruises: What They Are and Where to Take Them
48 Hours in Brisbane Before or After a Cruise 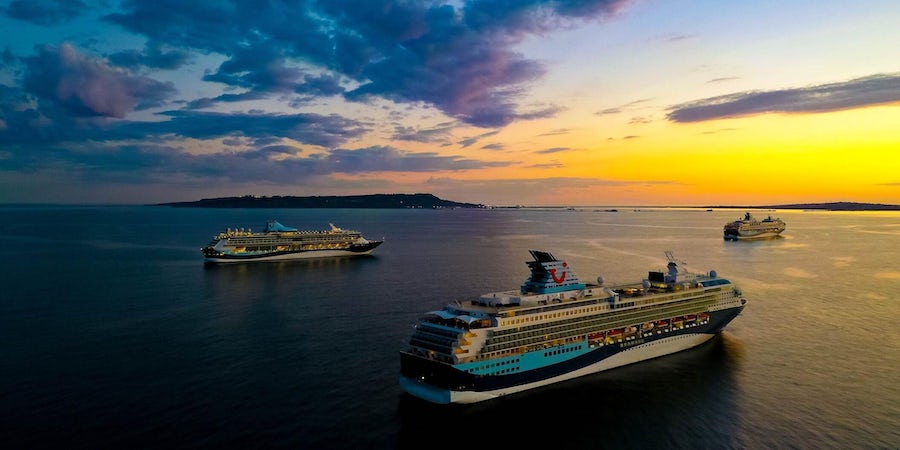 Many cruise lovers have wondered what their favourite ships have been doing since sailing stopped in March. Most have been idling off the coast of various countries, including the Bahamas, Gibraltar and the Philippines.

If you go down to the south coast of England, you'll see a large number of cruise ships idling in the English Channel.

Their number varies daily, but since cruising paused in March, ships from lines including P&O Cruises, Cunard, Marella and Royal Caribbean are visible, strung along the south coast from Portsmouth to Plymouth.

Now, a former P&O Cruises captain, Paul Derham, is giving people the opportunity to get up close and personal with the vessels on so-called "ghost ship" tours on his ferry. (Of course, these really aren't ghost ships, as the cruise ships need a certain number of crew to be able to operate, even without passengers).

The tours take a maximum of 10 people and run daily (weather depending) for two-and-a-half-hours, and they have proved to be a runaway -- albeit unexpected -- success.

"We had to stop the ferry service late March because of lockdown, people just weren't around," Derham said of his regular Mudeford Ferry service. "So we thought what else can we do? And knowing a little bit about P&O we decided to do trips out to see the cruise ships on nice days, with nice weather and knowing what the tides will be.

"We had no idea what to expect -- we whacked it on Facebook and within two hours we had filled four trips.

"The passengers really enjoy it. They're a unique bunch of people, and they love what we do."

The ferry passengers have usually been on the ships and get excited about seeing them from a unique angle, or they want to try a cruise and they are interested in seeing the ships.

Derham offers a running commentary, drawing on his cruise knowledge and experience, which stretches to 1975 when he worked on the iconic Canberra. He supplies anecdotes of his time on the ships, which also include Island Princess, Pacific Princess, Royal Princess, Sky Princess, Queen Victoria (which is also off the south coast); Arcadia, Golden Princess, Aurora and QE2; as well as local knowledge.

The tours get as close as 50 metres from the ships, which as Derham says: "this is close", particularly in the case of an 18-deck behemoth such as Allure of the Seas.

Derham, who was the captain of Arcadia, has a special affinity for that ship, and the highlight of the tours are when the two vessels respond to each other -- the ferry with its high-pitched horn and the larger ship with its deep bass response (which you can listen to on the video below).

Passengers wave P&O Cruises' flags from the ferry, and if there are crew around, they will often wave back.

Derham will continue to offer the tours as long as the weather is fine and there is demand and of course as long as their ships are there. Sadly, they don't seem to be going anywhere fast.

To book the cruises you'll need to visit the Mudeford Ferry homepage, where times and whether the ferry is running are posted. The cost is £20 per passenger for the 2.5 hour trip.