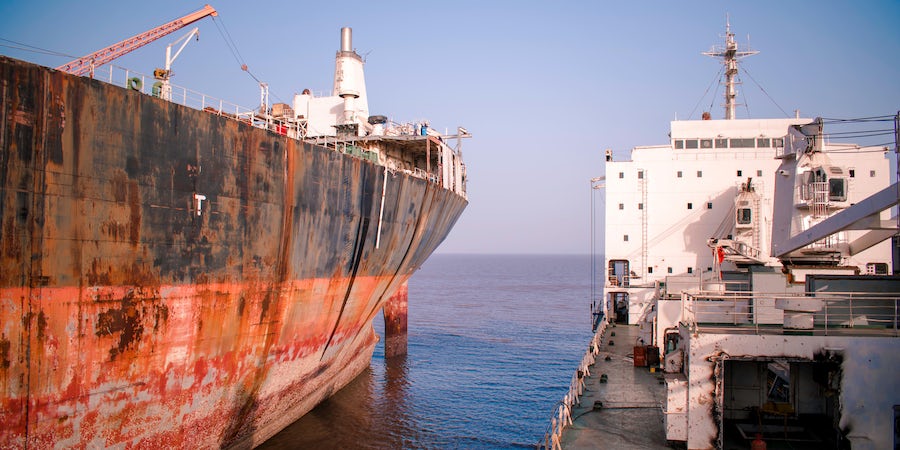 What Happens to Cruise Ships That Are Slated to Be Broken Up?

With the global health pandemic cutting deeply into the bottom line of cruise operators, older vessels are being jettisoned at an extraordinary rate; one that has not been seen in recent memory.

Normally, older cruise vessels can be sold into secondary markets as "second-hand tonnage'" for future service with other companies. But with finances stretched across the board, this is no longer an option for many would-be buyers.

That leaves just one possibility: the sale of a ship for its scrap value. Cruise Critic talked to one of the foremost experts on the subject, maritime historian and cruise author Peter Knego.

Over the past two decades, Knego has made several trips to the shipbreaking yards in India to recover and preserve artwork, furniture, and other precious objects from ships before they are scrapped. He, better than most, is well aware of the ignominious fate that awaits ships as they are broken up.

"Every time there was an historic ship that merited a visit, I flew off to India to endure a very challenging process of taking photos that are not allowed, climbing scary rope ladders, avoiding mosquito-borne illnesses, crooked ship breakers, monsoons and oppressive heat," Knego told Cruise Critic. "I made the first of nine visits in early 2004, when there were no less than ten beautiful vintage ships on the beach, most of which were displaced by the glut in tourism following 9/11. "

Knego's last trip to the breakers came in 2014, when he visited the AMEN, the breaking-name for the ex-Discovery and Island Princess. Knego salvaged original art, décor, and furniture from the iconic vessel, one of the original Love Boats. Knego then

In the past, cruise lines have selected ships for scrapping primarily on age, mechanical seaworthiness, or their inability to comply with new Safety of Life at Sea (SOLAS) regulations.

Over the past few decades, a slow but steady stream of older ships -- mostly early cruise ships from the 1970's or former ocean liners that were pressed into cruise service decades ago -- have been sent to scrap yards in India, Turkey and further afar for final demolition.

These older ships, particularly the old ocean liners, had interior fittings like woodwork that didn't comply with SOLAS safety and fire regulations. The cost of refitting a ship to keep up with changing regulations is often more than the vessel is worth.

Most of the ships that have been scrapped in the past two decades won't ring a bell for all but the most experienced cruisers. They include ships like the former Costa vessel Eugenio C, which cruisers might remember better as Big Red Boat II. Built in 1966, the ship was scrapped in 2005 after 39 years of service.

"Even the Big Red Boat II was quite old and hampered by mechanical issues and outmoded steam engines when she was scrapped at the age of 39 years in 2005," Knego said.  "You have to go back to the 1970' s to find numerous still-modern ships that were cut short by the fuel crisis and the jet airliner.  Shaw Savill Line's very modern Northern Star, which was only 14 years old, is the most shocking example of a ship that was scrapped too early, when she went to Taiwan in 1976.  Other ships like P&O's Iberia and Orsova were only 18 and 19 years old when they were scrapped in 1972 and 1973, respectively."

The COVID-19 pandemic has changed all of that. Ships are being sent to the breakers -- which some lines politely term 'recycling' -- at an unprecedented rate. In the last two months alone, Carnival Fantasy (1990), Carnival Inspiration (1995), Costa Victoria (1996), Monarch (1991), and Sovereign (1988) have all arrived for dismantling. More are rumored to be sold in the coming months. More will almost certainly be beached at a shipbreaker before the pandemic is done.

When a ship is sold to the breakers, the transaction is completed for a fraction of its resale value as an operational vessel. The price is typically limited to the ship's raw material value.

Where are Major Shipbreaking Yards Located?

One of the world's largest shipbreaking operations takes place off the shores of Alang, on India's west coast. India recycles nearly 60 percent of the world's marine vessels.

Other shipbreakers include the Chittagong Shipbreaking yard in Bangladesh; Gadani in Pakistan, and Aliaga, Turkey, where Carnival Fantasy, Monarch and Sovereign ended up recently.

The Final Stages of Operation

Before a ship can be broken up, it first has to have all of its salvageable goods offloaded. In the case of the vessels being scrapped due to the COVID-19 pandemic, this includes all valuable audio-visual equipment from theatres and staterooms, merchandise from the gift shop, and other items that could potentially be repurposed or used throughout the fleet.

"This latest crop of vessels sent to Aliaga seems to have offloaded spare parts and equipment that can be used on other ships in their respective fleets," Knego said.

"Equipment can range from engine parts (in the case of Carnival, most of the ships are in platforms that are designed with identical machinery, so a part from one ship can be used on the next in the class).  It also can include generators, theater sound and video systems that can be installed on other ships, HVAC equipment, pumps and just about anything that can be repurposed for further use.

"In the case of Carnival Fantasy, the only historic items removed, aside from equipment, were supposedly the bell, the commemorative coin and a large ship model," Knego told Cruise Critic. "Sadly, that means any remaining artworks and furnishings, including some interesting original elements by former Carnival architect Joseph Farcus, will soon be destroyed or end up getting sold into the Turkish marketplace."

Knego noted that not all ships are stripped this thoroughly before heading to the breakers. He points to the former Louis Cruises fleet (now better known as Celestyal Cruises) that was disposed of in the early 2000s, due to new SOLAS laws that were to come into effect in 2010.

"Everything was pretty much in place when the ships arrived in India," he said, "including vintage artworks, furnishings and museum quality fittings." This is common for vessels that are on their third or fourth owner, which may not have any interest in saving the original artworks or décor on these vessels that were originally former "Ships of State" built in the 1950's and 1960's.

As for whether cruisers might see salvaged artifacts from the ships heading to the breakers now on future newbuilds, Knego is quick to advise passengers not to get their hopes up.

"Very few cruise lines have any interest in salvaging the original artworks on their ships, quite sadly and frustratingly," he said. "Even when I have rescued key items and presented them to certain cruise lines…based on their historic and decorative merit, I have been met with varying degrees of indifference or outright hostility for offering them up."

Knego noted that if these items are not rescued from the breakers by maritime historians like himself, these original décor elements end up being sold in local markets, or simply used as scrap or firewood.

Once anchored offshore at the shipbreaking yards, ships must wait for the next high tide in order to be driven as far up the beach as possible.

When high tide does come, ships are sailed at full speed onto the beach, often performing numerous maneuvers and course corrections to avoid crashing into the wreckage of other ships.

In many cases, officers on the bridge have only the smoke lit by a small bonfire on shore to act as a positioning guide. It is a sad, and often dramatic, end to a vessel's service life.

Breaking up ships for recycling is often a dangerous and complex job; one performed in sweltering conditions with questionable safety standards.

It is also a time-consuming process that includes other commercial vessels, from tankers to bulk cargo ships to passenger ferries, all awaiting their turn on the beach to be broken up.

"In India, where there is less sophisticated equipment and severe weather, from vast tidal variances, heat and humidity to monsoons, scrapping a typical 20,000 to 30,000-ton cruise ship takes about six months," Knego said.

He noted that Norwegian Cruise Line's famous S.S. Norway, which was constructed as the ocean liner France in 1960 and arrived off Alang in 2006 as "Blue Lady", took over a year to successfully dismantle.

"In Turkey, the work tends to go much quicker but until now the largest cruise ship scrapped there was the 35,000-ton ANTIC which cruisers will remember as the ex-Fairsky, Sky Princess and Atlantic Star which took about four months," Knego said.

"It will be interesting to see how fast the Monarch, Sovereign and Carnival Fantasy, all twice that size, will take, especially with them all there at the same time."

Knego said that shipbreaking is a normal, if unceremonious, part of a ship's natural life cycle.

But he drew significant parallels between what is happening now and the state of the industry in the 1960's and the 1970's, when the advent of the jet liner and the oil crisis saw much of the world's ocean liner fleet prematurely delivered to the breakers.

"In the overall scheme of things Carnival Fantasy, Monarch, Sovereign and even Carnival Inspiration have enjoyed relatively long careers, even though in the pre-COVID world they could have sailed on for several more years," Knego concluded. "To me, the most shocking one thus far is Costa Victoria, which was a state of the art, one-off masterpiece of design when she was delivered in 1996.

"If they Carnival Corporation could not find a buyer for her, that does not bode well for numerous other ships from the 1990's, especially if mainstream cruising remains off the table for much longer."