You may also like
Dismiss
The Best Month to Cruise Hawaii
Why Sea Cloud Is the Luxury Cruise Line for You
Canada's Rocky Mountaineer Train: A Perfect Alaska Cruise Extension
Pictures of Sky Princess
Top Cruise Destinations 2020
7 Best Beaches in Nassau for Cruisers
20 Photos of Our Members' Favorite Cruise Travel Memories
Step By Step: How to Submit Comments on Cruise to the CDC
Virtual Cruise Trip Report: Onboard a Cruise Critic Member's "Fake, Made Up and Completely Impossible" Cruise Itinerary
Alaska Cruises Are A Go For 2022, Though Scope of Cruise Season Remains to Be Seen 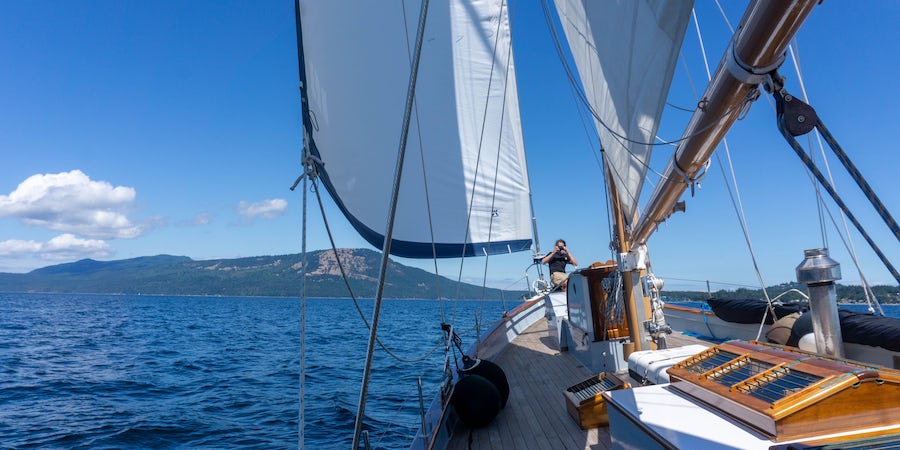 Why There's Still Nothing Like a Day on the Water

The COVID-19 pandemic has kept most cruise ships from sailing, but there's still nothing like being out on the water. While a day trip is nothing like a cruise ship, Cruise Critic contributor and resident Canadian Aaron Saunders spent a half-day sail from Vancouver Island aboard Outer Shores Expeditions' 70-foot, six-passenger schooner, Passing Cloud.

Here are his impressions from being out on the waves once again:

During the summer months, Passing Cloud normally operates weeklong sailing expedition adventures along the coasts of British Columbia, including Haida Gwaii and the Great Bear Rainforest.

Because of restrictions imposed by Transport Canada and other regulatory bodies this year, Outer Shores is now offering full-and-half-day explorations aboard Passing Cloud that are geared towards British Columbians, with sailings departing from Mill Bay just 35 minutes north of downtown Victoria.

I've sailed four previous times aboard Passing Cloud, and stepping aboard in Mill Bay was like coming home. The ship was spotless, with every bit of teak polished and cleaned, and every bit of brass sparkling like new.

Related: Live from the Biggest Cruise Ship in the World: First Impressions of Royal Caribbean's New Wonder of the Seas

Because my fellow guests and I didn't know each other on this half-day sailing, masks were mandatory onboard. I didn't find this to be a problem. Sure, it's strange for the first half hour or so, but if this is what it takes to get cruising moving again, count me in.

Hand sanitizer was widely available onboard, and passengers were invited to sit back and enjoy the views or to assist with sailing this magnificent schooner.

Unlike a traditional harbour cruise, Passing Cloud's full-and-half-day sails are structured around the experience of sailings and casually discovering the waters of the British Columbia coast.

Passengers are also invited below decks to check out Passing Cloud's beautiful salon, with its skylights, intricate wood panelling, and generous library of topics on local British Columbia marine life, history, and First Nations' history. Forward are two staterooms with their doors propped open that would normally be used on multi-night cruises.

Up top, it's all about the joy of being at sea. Passing Cloud seemed to think so, too: a brisk gust of wind took us from a leisurely four knots up to 9.2 knots in a matter of seconds.

On one of the nicest days the West Coast has seen all summer, it's hard to believe that COVID-19 even exists. In many ways, my five-hour sailing during the middle of the week was a sort of therapy; a release from the tension, stress and uncertainty of "the real world" these days.

Related: Just Back from the Arctic with Hurtigruten: Following in the Footsteps of Susan Calman

I also took pleasure in being part of Passing Cloud's history once again. Built in 1974, its teak decking comes from an old steamship built in 1923 called the S.S. Cardena that was scrapped in 1961. These are real two-by-fours of teak -- something that's hardly ever seen anymore in modern shipbuilding.

My afternoon out on the water was instrumental in reassuring me that cruising will get through this; that ocean travel will still exist post-pandemic. It is easy to get caught up in all the negativity and fear in the world. Somehow, being out on the waves made that go away, if only for a time.

Related: Just Back From Antarctica During Omicron: Lessons Learned

It is clear that when cruising resumes, it will happen on smaller ships first. Outer Shores is running these day-trips through the fall and while it is primarily targeting local Islanders, these small ships are paving the way for the big lines to return, proving that cruising was -- and is -- a safe way to vacation.