You may also like
Dismiss
Why G Adventures Is the Expedition or River Cruise Line for You
Countries That Require Visas for a Cruise
10 Things to Do on Queen Mary 2
Cruise Vision 2020: The Future of Cruising in Australia and New Zealand
Why Germ-Zapping Robots and AI Technology Could Be the Future For Cruise Ships
How To Cope With Cruising's Pause? Plan Far, Far Ahead
Why There's Still Nothing Like a Day on the Water
Photos From MSC Cruises' Return to Sailing in the Mediterranean
Are Spas and Indoor Pools Still Open On Cruise Ships?
What Cruise Changes Will Royal Caribbean Bring From Singapore to the US? What’s Staying, What’s Going 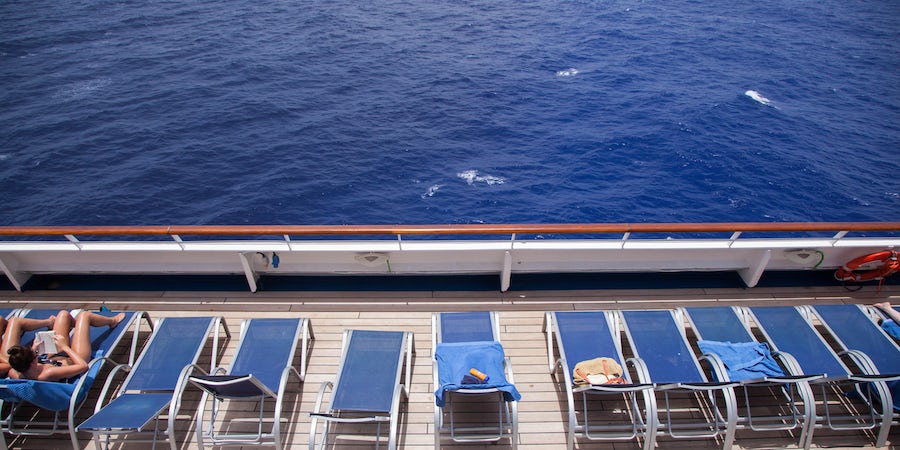 Will I Have to 'Social Distance' on My Next Cruise?

As cruise lines gradually release their new health protocols in a post-COVID-19 world, one thing is becoming increasingly clear -- social distancing will be practiced onboard.

Royal Caribbean has already said we might have to wave goodbye to the buffet as we know it (although it since backtracked on that statement) -- and other lines have said we quite probably will have to wear masks onboard.

But where do the lines stand on social distancing?

The river lines are already a step ahead, having released detailed health protocols which amongst many other new rules, include strict social distancing measures.

Nicko Cruises, which became the first river cruise line to restart (sailing with passengers June 1), has clearly painted lines in all public areas, including the sundecks.

And crucially, the ship, NickoVision, sailed with half the number of passengers it normally would (110), which of course makes it much easier to social distance.

But that is a river ship, and river vessels carry fewer than about 200 passengers, and they skew heavily toward adults.

So can these social distancing protocols be applied to large ocean ships? We investigate.

Norwegian Cruise Line is the first of the big ocean lines to provide a glimpse into its new health protocols, stating that capacity across the fleet will be reduced, and capacity in public rooms and events will be limited to encourage social distancing.

And speaking to Cruise Critic recently, Carnival Corp. CEO Arnold Donald gave a few broad ideas on how social distancing might be enforced across the fleets:

"So the issue is more the public spaces on the ship and also sufficient capacity to handle if there's spread that occurred on land that people brought on that is discovered on the ship."

A few thoughts being kicked around that Donald mentioned, without committing to any as changes cruisers should expect: Mandatory room service one night to reduce the number of people needing seating in the restaurants; spreading more people from the main dining room to other dining experiences; reducing show lengths and adding more of them; keeping empty seats in the theater between couples.

The lines have not said it, but technology being trialed by a number of cruise lines could also play a part with dispersing crowds. VANTIQ, a software developer platform, has seen a huge increase in enquiries about people tracking applications.

CEO Marty Sprinzen said: "This application, and others like it, are being used in some airports. It can also be applied to cruise terminals and ships for various applications, including crowd control. It can also alert operators in real time, so crowd control can be implemented as the rush happens, not after it already has."

MSC Cruises already used geo-location wristbands, which allow you to locate friends or family wherever they are on the ship (using your app), rather than meeting them at a central point. And Ocean Now on some of Princess Cruises' ships, part of the line's broader Ocean Medallion approach, allows passengers to order food, drink and other itemss and have them delivered away from other passengers or shopping areas.

Smaller lines such as British line Cruise & Maritime Voyages operate older, smaller ships which have the advantage of a more advantageous passenger-to-space ratio than modern vessels.

Related: 8 Reasons to Cruise on a Refurbished Ship

"Our smaller- to medium-sized cruise ships carry fewer passengers, so we believe that we can adapt more readily to social distancing measures than some other cruise lines carrying many more passengers."

The line is essentially adults-only, which Hall said makes it a lot easier to enforce social distancing:

"Another significant factor is that essentially CMV is an adult-only proposition where protocols such as social distancing can be more easily practiced than on board ships with families including young children," he added.

But perhaps the question that cruise lines should be asking is not can it be enforced, but will people even want to cruise if they have to social distance?

Related: Why I Love Cruising On The Current Reduced-Capacity Cruise Ships: An Introvert Reports

A scan of the Cruise Critic Message Boards provides the quick answer: No.

As member The-Inside-Cabin wrote: "I would never go on such a cruise. It's either a normal cruise or none at all for me.

"Is there anyone out there who WOULD go on a socially distance cruise?

"Wear a mask on a cruise -- nope. They can sail without me if those are the rules.

"The whole point of cruising -- for me anyway -- is normal socializing. Anything less would be a waste of time and money."

Iancal makes the point: "No, because we doubt very much that it is possible. Cruise lines have proven that they cannot enforce their own rules such as dress and poolside chair hogging. What makes anything think that they can enforce social distancing?"

Prescottbob joked: "Depends. If these future cruises included an unlimited drink packages, daily complimentary massages, & complimentary Wi-Fi at the current per diem rates (all categories) that might be a 'deal closer' for some."

But then added: "Kidding... the answer for us would be a definite no."

However, there were some posters who said they would be quite happy to cruise, like Mary229: "If the ship is clean, maintained, the food is fresh and tasty I am just fine. I am a natural social distancer so not a biggie for me."

And OHCruiser: "Sure. If the destination is good, the crew friendly, I'm just happy being on the water."

Cruise Critic's boards members say these measures are just temporary to get the lines back sailing and concerned passengers back onboard -- they will not become the norm -- a theme echoed by some technology experts.

"Cruising is all about the personal attention and relationships built with crew and other guests," said Luis de Carvalho, CEO of Bermello Ajamil and Partners Europe, a global leading consulting practice specializing in port and destination development for the cruise and maritime industry.

"Personal contact with the ship board staff is and always has been a very important component of creating memorable experiences.

"Otherwise it will be just transportation from one place to another."