You may also like
Dismiss
Cloud 9 Spa on Carnival Cruise Line
3 Easy-to-Make Cruise-Inspired Cocktails for Your Holiday Party
Eat Like a Local in Montreal: 6 Must-Try Foods
Greenhouse Spa on Holland America
Best Cruise Ship Beds
6 Best Magnetic Hooks and Door Magnets for a Cruise
7 Must-Have Items for Every Shore Excursion
7 Easy Things You Can Do to Help the Environment When You Cruise
Mt. McKinley Princess Wilderness Lodge
8 Creative Ways to Work Out on a Cruise Beyond the Gym 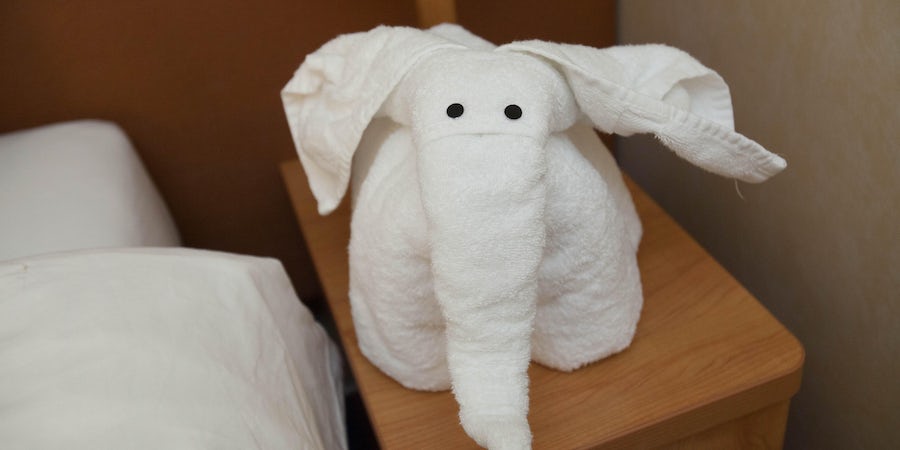 How to Make Towel Animals Fit for a Cruise

Is there anything as joyful and pure as a cruise ship towel animal? Luckily, you don't need to be on a cruise to unlock the magic of how to make towel animals.

We spoke to three Carnival Cruise Line stateroom stewards -- with a combined 37 years of experience in making towel animals -- about the art of towel-folding and which animals are the most popular. It turns out that puppies and elephants are perennial favorites, along with the cheeky monkey. Animals with whiskers seem the hardest to make; a mouse was voted the most difficult towel animal to master, followed by a cat and rabbit.

When asked about favorite towel animal goofs, Carnival room steward Johnny Orlando admitted, "When making a penguin, which is my favorite towel animal creation, at first it doesn't look like a penguin -- it looks like a chicken without legs (laughing)." Fellow room steward Komang Wahyu Ciptaning and assistant stewardess Mary Ann Repil both admitted to giving their towel animal monkeys faces that looked more like a dogs when they tried them for the first time.

But practice makes perfect. If you've ever sailed on a Carnival cruise, you know that awesome morning when passengers wake up to a pool deck takeover of towlies. How long does that take, you might wonder? All three stewards agreed the transformation happens in just five to 10 minutes!

Perfect your own favorite towel animal with the following tutorials from the towel animal experts at Carnival Cruise Line. You'll have a mini-zoo full of new, slightly starched friends in no time.

How to Make a Towel Swan

How to Make a Towel Elephant

Related: 6 Best Magnetic Hooks and Door Magnets for a Cruise

How to Make a Towel Bunny

How to Make a Towel Dog

Related: 10 Travel Hacks That Will Make Getting to Your Cruise Ship a Breeze

How to Make a Towel Bear

Related: 7 Ways to Get the Cruise Ship Photographer to Leave You Alone

Did you tackle the towel animal challenge with tutorials above? If so, we'd love to see the results. Post your attempts on social media with the hashtag #cruisecritic, or share your photos in the Cruise Critic message boards' "Towel Animal Takeover" member gallery