You may also like
Dismiss
When to Fly In for a Cruise
Flying to Your Cruise: A Guide to Long-Haul Airports, Airlines and Flights
What Is a VAT Tax and Where Will You Find It on a Cruise?
Hidden in the Fine Print: 16 Things You Need to Know About Your Cruise Contract
9 Waterproof Items You Need for Your Next Cruise
How to Navigate the Airport on Cruise Turnaround Day
What Is the Economic Impact of the Cruise Industry in the United States?
Your Favorite Cruise Ship is For Sale? Here's Why You Shouldn't Panic
Step By Step: How to Submit Comments on Cruise to the CDC
Crystal Cruises Temporarily Ceases Sailings: What Cruisers Need to Know 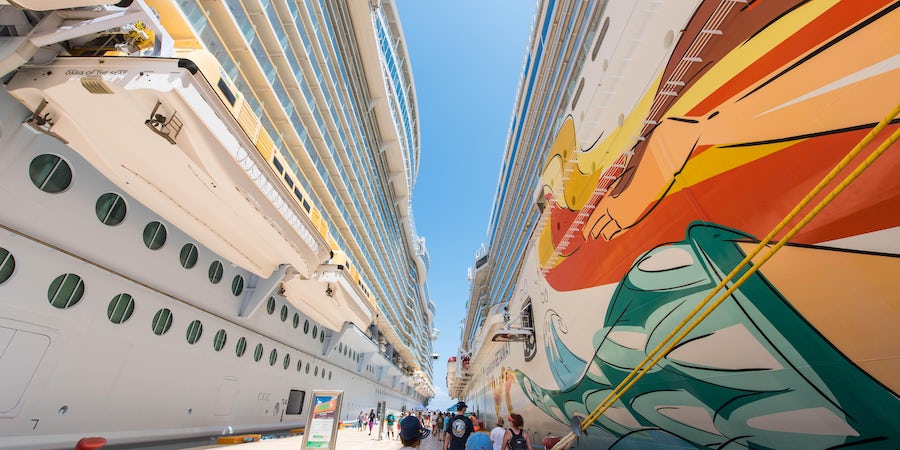 What Happens if My Cruise Line Goes Bankrupt?

Sailing on the dark waters of the English Channel and steaming southbound through the night toward Guernsey, Durant Imboden was surprised to feel the ship, the MV R7, steer sharp to the starboard side. Suspecting that, for some reason, the ship had reversed its course and was now heading north, he quickly consulted the GPS map on his state room television and confirmed that the R7 appeared to be heading back to its embarkation port of Dover.

"I was mostly curious about what was going on," Imboden remembers. "And what would happen next."

He wouldn't have to wait long. Checking his email, and then the company website, Imboden learned that the cruise line, Renaissance, had just gone bankrupt. The remainder of his 2001 voyage was strange and uncertain, with crew members crying as they served up a final breakfast, and passengers warned that after the ship reached port and was "arrested" by creditors, they may not be able to retrieve their personal items.

Fortunately, all went smoothly, and both cruisers and crew were repatriated to their home countries by the company. Says Imboden, "As I recall, similar scenarios played out across the world."

In some ways unthinkable, Imboden's experience raises a question worth considering: What should you do if you've booked a cruise, and the company goes bankrupt? And how can you protect yourself?

For starters, while the word has very negative connotations, "bankrupt" doesn't always (or even often) mean that a company will cease operations entirely and permanently. Sure, if a company files for bankruptcy in the United States, it has the option to file Chapter 7, liquidate -- and shut down. But Robert M. Lawless, a law professor at the University of Illinois with a specialization in bankruptcies, explains that cruise lines would almost certainly file for Chapter 11 protection.

Chapter 11, he says, allows companies to reorganize their finances while attempting to make a comeback, paying back their creditors over time. Which means that they can continue to operate, sometimes with little repercussion to the consumer, while going through the process.

Almost all of the major airlines in United States have filed Chapter 11 in the last two decades, most recently American Airlines, which spent two years reorganizing and emerged from protection in late 2013. "I think it is unlikely a cruise line would file bankruptcy with the intention of liquidating," he says. "It is much more likely they would try to continue in chapter 11."

Should they then still fail (like Exploration Cruise Lines and Eastern Airlines did, in 1988 and 1989, respectively), they would liquidate, something that can be done within the provisions of Chapter 11.

Lawless adds that, if continuing operations under Chapter 11, a company will usually seek authorization from the court to keep their commitments to their customers. In other industries, this has allowed retailers to continue to honor gift cards and service warrantees, even while bankrupt. For the cruise industry, it means your cruise line could continue to embark passengers, sail and even honor vouchers, while reorganizing through the courts.

"It doesn't strictly follow the bankruptcy code, but the creditors involved want to get paid the most," says Lawless. "And they know that their best chance is for the company to continue to provide services to their customers."

However, a company can take years to restructure under Chapter 11, and if you're expecting to get paid back for a canceled cruise, it can be quite a long time before you see any money.

From Cruiser to Creditor

People holding tickets or deposits for voyages on a bankrupt or financially unstable cruise line would likely face a period of uncertainty before any ultimate resolution. Michelle Couch-Friedman, executive director of Elliott Advocacy, cautions cruisers to be careful while navigating these waters.

For example, passengers may be holding vouchers for a future cruise, something the cruise lines often offer in lieu of a full refund for a canceled or disrupted cruise. Sometimes, cruise lines provide more credit than the actual price paid for the cruise -- 125 percent, say, of the original value -- to lure passengers into taking the credit and leaving their money with the cruise line, especially when the lines are hurting for cash.

While the cruise line stays afloat, you can use the voucher and redeem its value; if it ceases operations and shuts down, the vouchers no longer have value. "If I had a cruise credit, I would immediately book a new cruise and cover it with a travel insurance policy that covers bankruptcy," she says. "If you just tuck that voucher away and think about it, if the cruise line goes bankrupt, that voucher is worthless."

And the day may come when a cruise line ceases operations, and you become a creditor. "If you're a customer, you're a creditor," Lawless explains. "People often don't think of themselves that way, but you've given them money, and they've promised to provide you a service, so you're a creditor." Lawless notes that the same is true across industries, whether you've booked a hotel room or bought a ticket to a baseball game.

Related: What to Expect on a Cruise: Booking a Cruise With a Travel Agent

Unfortunately, you wouldn't be the first in line to get your money back. That's reserved for "secured lenders" with collateral, generally big banks and hedge funds. These institutional lenders have it baked into their contracts that, should a company default, collateral must be converted to dollars to repay them. What's collateral?  "Everything, from the ships, to the trademarks, to the toilet paper onboard," Lawless says.

But consumers have priority over other "unsecured creditors," up to a very specific amount, adjusted for inflation -- $3,025. Consumers are still well down the list (seventh, to be exact, Lawless says) for payment, behind taxes owed and administrative fees, among other things.

Which means that if you booked a cruise for, say, $5,000, then $3,025 of that will have some priority and be likely to be paid back. The remaining $1,975 would not have priority and you'll probably get back only a percentage of that amount -- or possibly nothing at all.

Related: Cruising in 2022: Why Onboard Tipping is More Important Than Ever

And if you're mid-voyage when the company goes bankrupt, are they obligated to get you where you're going (and home)? Technically yes, Lawless says. For example, Renaissance Cruises had 10 ships afloat when it shut down in 2001; the company ordered all of them to the nearest port, and flew passengers home from there.

However, in reality, plans don't always work out as they should.  "If there ain't no money, there ain't no money," says Lawless. "If you're in the middle of the Pacific and their financing has dried up and they've got a hundred dollars in the bank, whatever their legal obligations are, it doesn't matter -- they have no money." And you might find yourself responsible for getting yourself back home from wherever the cruise ship discharges you.

No matter what a company's obligations under the law -- and their ability to meet them -- travel consumer advocate Couch-Friedman urges cruisers to be "very informed shoppers," as they consider their options for future bookings.

For starters, she says, always use a credit card to pay for your cruise. "We tell people to never pay by bank transfer or check; you want to protect your investment in your vacation," says Couch-Friedman.

She notes that under the Fair Credit Billing Act, when a merchant doesn't provide services as promised, consumers who used a credit card to pay for that service can file a dispute and get their money back, whether a voyage is simply cancelled, or even if the company goes bankrupt.

"If the company goes out of business, your credit card will get your money back for you," she says, warning that a debit card, while it may look like a credit card, does not offer the same layer of protections.

Couch-Friedman adds that buying the right kind of third-party travel insurance to protect your trip is also very important, and that you need to read the fine print. There's a wide range of products on the market, and it's a buyer-beware situation.

While the legalese language and sheer size of policies can be daunting, she encourages cruisers to take advantage of the standard "lookover period" provided to consumers when they buy insurance, which can vary from seven to fourteen days.

"Go through every line of that policy, and make sure it matches your needs, what you want to be covered for. These policies only cover 'named perils' -- that is, exactly what's in there," she advises. "If you're worried about your cruise line going bankrupt, make sure your insurance policy covers the bankruptcy of a travel provider."

Scott Adamski, head of US Field Sales for AIG Travel, adds that all of his company's core, comprehensive products include financial default as a covered peril under its standard trip interruption or cancellation coverage for travel suppliers, including cruise lines. "You might not find this coverage in the cruise line's own protection plans," he warns, encouraging people to carefully compare all the options on the table.

Once you've learned of a cancellation or company default, he says cruisers should immediately call their travel insurance company to file a claim. The sooner you get paperwork in, the sooner you can get reimbursed -- especially if you can't rely on the cruise line paying you back.

Adamski also recommends booking a cruise through a travel agent if you're concerned about your cruise line's future. If the worst happens, agents can be "worth their weight in gold" in helping you get back from a partially completed trip, and/or helping you navigate the sometimes-intimidating process of getting compensated. (Note that an agent doesn't offer extra financial protection, just expertise in helping you handle a complicated situation should you find yourself stuck in one.)

Ultimately, if you have concerns about the solvency of your cruise line, don't be hasty, do your research, keep an eye on the news and follow all of the above advice. When the situation is right and you want to cruise, just make sure you've got all of your protections in place and you're not risking more than you can afford. Lawless gets the last word on the subject: "Yes, you need to know your rights, but don't let that paralyze you from going on vacation and enjoying your life."