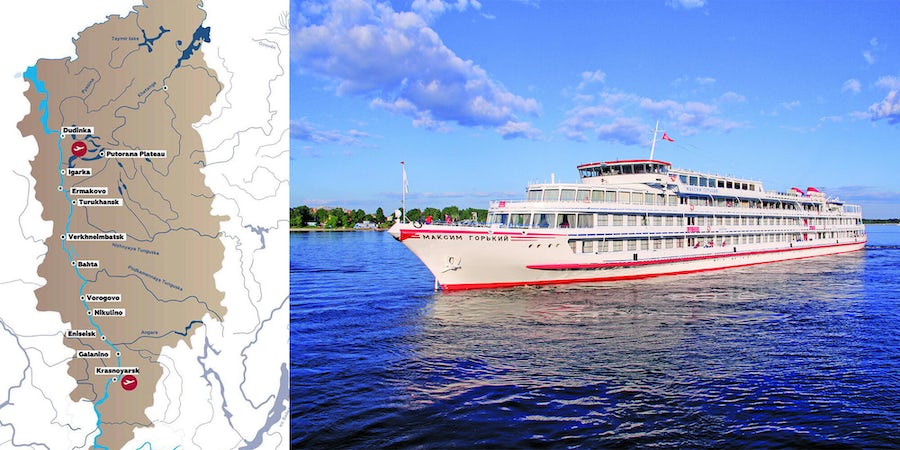 The Yenisei River, located in Russia, runs about 2,200 miles across central Siberia, emptying into the Kara Sea. The landscape along the river varies wildly, from Arctic tundra to valleys to mountains. The Yenisei isn't like other rivers, with multiple cruise lines competing for cruisers with similar itineraries.

At publication time, only Vodohod Russian River Cruises offers sailings, with 10- to 13-day voyages departing and ending at either Krasnoyarsk (with some round trips) or Dudinka.

A cruise on the Yenisei River gives travelers the opportunity to discover the life and culture of small tribes and indigenous people, to step into a permafrost cave and to try Siberian fishing. History and expedition meet on an offered hike to the "Dead Road," Josef Stalin's unfinished project, an 806-mile railway in the Arctic, costing countless Gulag prisoners their lives.

A trip on this Siberian river reveals a side of Russia that is not accessed by the casual traveler, and therefore can be considered a once-in-a-lifetime expedition cruise.

Reason(s) to Go: With only one cruise line plying the river, so far, a trip on the Yenisei River is a chance for cruisers to experience remote places in Siberia that few travelers will ever visit. Russia, including its enormous province of Siberia, isn't the easiest place for tourists to get to, so a Yenisei River cruise offers a way to see some of the country's most remote sites, including Siberia's third-largest city, Krasnoyarsk.

Other highlights include visiting Putorana Plateau, a UNESCO World Heritage site boasting forest tundra and Arctic desert systems; Igarka, a city located beyond the Arctic Circle and built on permafrost, where the midnight sun lasts for up to two months in summer; and Bakhta, the subject of legendary director Werner Herzog's documentary "Happy People." The village can only be reached by helicopter or boat, and cruisers get the chance to meet some of the people featured in the documentary and learn more about their fascinating way of life.

Who Would Love It: Anyone who's "been there, done that" in regard to major cities in Russia and wants a deeper dive into the history, culture and lands in the farthest reaches of the country will appreciate a Yenisei River cruise. With lectures by onboard Russian experts, immersive interactions with localsand breathtaking landscapes, passengers are unlikely to have encountered anything like it before. And, if you take part in an old tradition for polar explorers to the Arctic -- a dip in the icy waters -- followed by drinking saltwater and then a shot of Russian vodka, you'll have bragging rights forever.

Who Wouldn't: First-timers to Russia probably won't want to start with a cruise on this river, which visits lesser-known, if not completely unknown, ports of call. This cruise takes passengers to places as remote as it gets, which might not be everyone's dream trip.