You may also like
Dismiss
Cunard Line History
Where Are Cruise Ships Built?
Titanic 2: Everything You Need to Know
Pickpocket-Proof and RFID-Blocking Gear to Keep Your Stuff Safe on a Cruise
Cruise Vision 2020: The Future of Cruising in Australia and New Zealand
The Most Exciting Ship Launches in 2020
How to Keep Your Data Safe When Cruising
Onboard Health and Safety Essentials to Pack for Your Next Cruise
Your Favorite Cruise Ship is For Sale? Here's Why You Shouldn't Panic 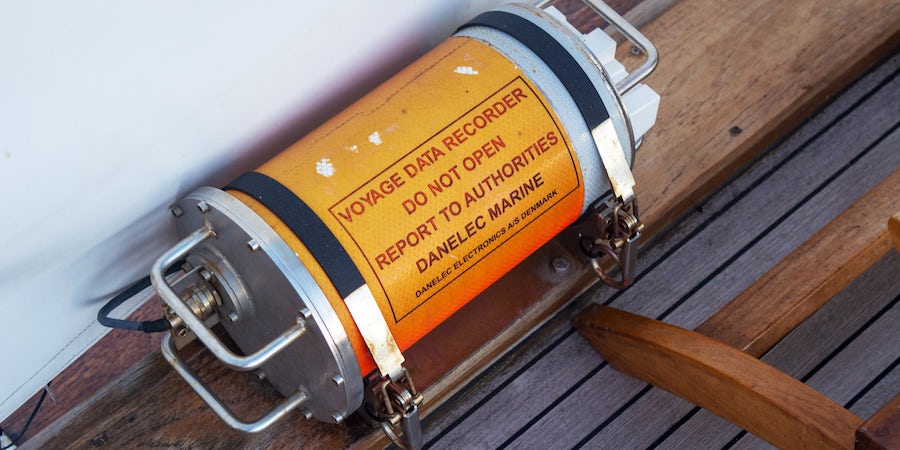 Voyage Data Recorder on Sea Cloud (Photo: Aaron Saunders)
Aaron Saunders
Senior Editor, News and Features
Many cruisers don't realize that much like a modern commercial airplane, a majority of oceangoing vessels -- including cruise ships -- are required to carry their own "black box" known as a voyage data recorder. Learn more about what these critical devices record and why they're important for cruise ship safety.

Does my cruise ship carry a voyage data recorder?

Every passenger ship over 3,000 gross tons built on or after July 1, 2002, is required by law to carry a voyage data recorders (VDR). Ships built before that date are only exempt if a VDR cannot be interfaced with the vessel's navigational equipment. Consequently, the vast majority of today's cruise ships are fitted with one.

Voyage data recorders are capable of withstanding heavy weather, fires, damage by collision and the sinking of the vessel.

What information does a VDR track?

A voyage data recorder is superior to the black box found on an airplane in that it typically records between 12 to 48 hours of data. (Modern cockpit voice recorders typically record the last two hours of audio; only data from flight control instruments is recorded for a longer period.) Crucially, VDRs record all conversations taking place on the navigation bridge via a series of microphones embedded in the ceiling and on the bridge wings. These are overwritten on the recorder's dataset every 12 to 48 hours.

The voyage data recorder also stores other information including the date and time; ship's position; speed and heading; all radio communications; radar data; electronic chart display information, or ECDIS; echo sounder information; main alarms data; rudder and helm orders and response; hull openings (shell doors open or closed); status of watertight doors and fire doors (open or closed); speed and acceleration over the water; hull stresses; and wind speed and direction. This information is recorded in real time, with the exception of the electronic chart information, which is updated every 15 seconds. Backup batteries located within the VDR can record bridge audio for up to two hours in the event of total power loss.

How are voyage data recorders used?

The information contained on the voyage data recorder is hugely helpful in reconstructing accidents or unusual events. For example, when the U.S.-flagged cargo ship El Faro sank off the Bahamas during Hurricane Joaquin in October 2015, which resulted in the loss of all 33 crew members, the National Transportation Safety Board (NTSB) was able to recover the VDR from the wreckage on the ocean floor.

All told, the voyage data recorder contained 26 hours of captured information leading up to the vessel's sinking. The NTSB was able to churn out a 500-plus-page report of all conversations that took place on the ship's navigation bridge; the largest ever produced in its history. It was also able to access parameters like the ship's heading and speed, rate of turn, position and GPS data, and data from the ship's AIS (Automatic Identification System).

These parameters allowed the NTSB to conduct an informed accident investigation that revealed El Faro sank largely because its captain failed to heed the warnings of other crew members onboard regarding the deteriorating weather conditions. Instead, he relied heavily on old, outdated forecasts that erroneously placed the ship outside of the danger zone when, in actuality, El Faro was sailing precariously close to the eye of the storm.

But the voyage data recorder can be used for more than just accident information. The data contained within the device allows the cruise line and crew to fine-tune the vessel for preventative maintenance; performance efficiency; analysis after heavy-weather events that might stress the hull or technical equipment; accident avoidance; and for safety training purposes.

Where is the VDR located on my cruise ship?

The voyage data recorder is usually situated atop the ship's navigation bridge, typically in an open technical area free of obstructions near the radar mast, but sometimes in an area that is accessible to passengers, like an open deck space above the bridge. A bright orange cylinder rests atop a platform or cage bearing the words: "Voyage data recorder. Do not open. Report to authorities."