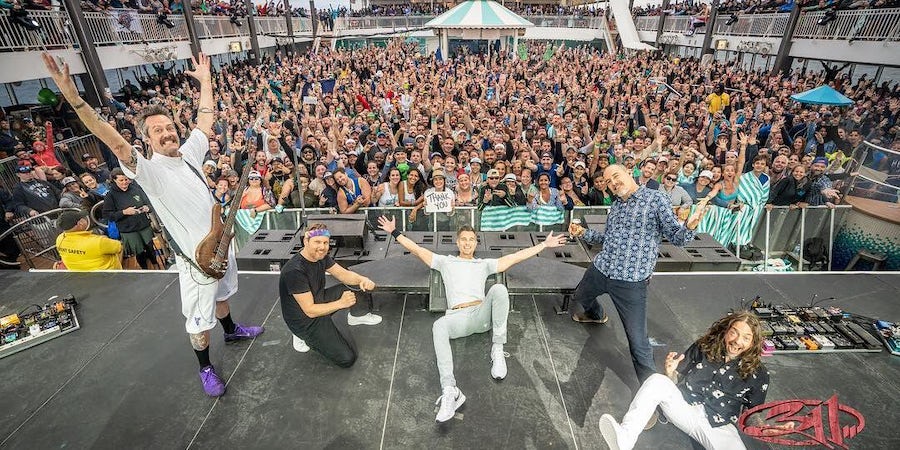 Though American rock band 311 won't be hitting the high seas in 2020, there have been six 311 Caribbean cruises to date and another is expected to sail in 2021 (dates TBD). Typically, sailings take place in early- to mid-March in honor of March 11, which is known by the band's fans as "311 Day."

The 311 cruise is a full ship charter and features the headliners along with a slew of other bands and musicians.

In 2019, the 311 Cruise sailed roundtrip from Tampa to Harvest Caye, Belize, and Costa Maya, Mexico, from March 1 through 6. The five-night sailing was aboard Norwegian Pearl.

The dates for the 311 Caribbean Cruise in 2021 have not been announced.

Previously 311 Cruise sailings have featured musical acts such as The Urge, Prof, Ozomatli and DJ Soulman and comedians including Brian Posehn and Mike Lawrence.

Like many music cruises, the 311 Cruise is much like a festival at sea. The headliners typically perform a few large pool deck concerts, while featured guests give live performances in various venues throughout the sailing.

Beyond the live performances, exclusive activities and events might include Q&A sessions with 311, a headphone party with a live DJ or a group game of "Name That Tune," along with craft beer tastings and a basketball tournament. Expect every passenger to get a chance to take a professional photo with the band.

This sailing is all about fun and camaraderie with fellow 311 lovers. Just chill around the ship or in port or get involved in every single activity -- it's up to you.

Any cruise lover who's excited by the idea of chilling out and bonding with other 311 super fans.