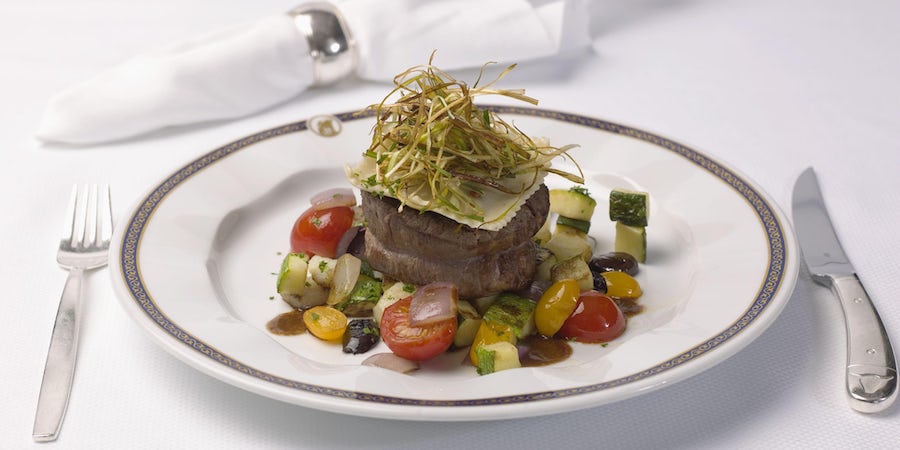 Food is a highlight of cruising, but you don't have to wait until your next cruise to enjoy some of the same dishes you've had at sea. Cruise Critic has compiled a list of the best cruise cookbooks to help you re-create many of your favorite meals.

." The book dates to 1999, when the line's fleet consisted of Crystal Symphony and Crystal Harmony. Recipes showcase the regions that Crystal sails to, and there are photographs alongside the detailed ingredient lists and directions. Entrees included in the book include chinois grilled lamb chops with cilantro mint sauce, pan-roasted chicken breasts with mascarpone polenta and roasted loin of venison with apple lingonberry relish, celery mousseline and mashed sweet potatoes. There are recipes for cold dishes, soups and desserts, as well as a basics section for those seeking easier options.

"A Taste of Series" (Hardcovers)

This series of cookbooks from Holland America and compiled by the line's master chef Rudi Sodamin has four volumes: "

A Taste of Excellence

A Taste of Elegance

A Taste of Celebration

." Between the four, fans of Holland America's culinary experience can find the recipes for many of their favorite meals. You'll find everything from cocktails to appetizers, entrees and desserts. Dishes include Dungeness crab cakes with lime ginger sauce and butternut squash soup with beet crisps, poached lemon-infused chicken breast with orzo and squash, and smoked salmon tartare risotto with butternut squash and arugula. You'll definitely want to flex your baker's muscles with the warm Grand Marnier chocolate volcano cake ("Taste of Elegance").

," takes readers through a cornucopia of recipes representing 28 nationalities. The recipes, which include the most frequently requested dishes along with the line's signature items, were compiled from stacks of paper, scribbled notes and the creative minds of chefs across the fleet. You'll find options for main entrees, as well as desserts including beef Wellington, black bean and lobster soup, baked Alaska and tiramisu. (This book has several editions, but most published in the 2000s have the same recipes.)

The "SAVOR" series brings together the signature dishes of Royal Caribbean's executive chefs and includes starters, main courses and desserts. You'll find everything from Asian and Italian specialties to a full dessert sampler. Recipes are straightforward and simple to prepare.

One of our favorite features of these cookbooks is each chef offers their recommendations for the perfect wine to accompany each dish.

has about the same number and many of the recipes are the same. (Volume 1 is also available but has almost all of the same recipes as Volume 2.)

"Around The World In 80 Meals: The Best of Cruise Ship Cuisine" (Kindle)

This cookbook highlights menus and recipes from a variety of cruise lines, including Cunard, Celebrity Cruises, Norwegian Cruise Line, MSC Cruises and others. Each chapter in "

Around the World in 80 Meals

" focuses on a different cruise line, with a brief intro to each. When it comes to the recipes, the focus is on the dinner menu, with instructions for recreating every dish.

Among the many recipes provided, you'll find several dishes served in the Britannia restaurant on Queen Mary 2, such as a steamed black mussels with saffron veloute appetizer and Canyon Ranch Spa Club spinach and pear salad, among others. Need something for a fancy dinner? You'll want to check out the dishes served at the Captain's Gala Dinner on MSC Cruises including roses of Norwegian salmon, crepes filled with ricotta cheese and spinach in a pink sauce, and grilled asparagus on puff pastry toast.

"Guy on Fire: 130 Recipes for Adventures in Outdoor Cooking" (Hardcover)

We can't guarantee you'll be able to get your burger tasting exactly like the delish options you'll get at Guy's Burger Joint on Carnival cruise ships, but fans of outdoor cooking will find something they like in the "

You'll also find useful information about cooking on different types of grills and, of course, lots of Fieri anecdotes from his adventures in cooking.

Sadly, Thomas Keller does not have a cookbook for The Grill by Thomas Keller restaurant found on select Seabourn cruise ships, but fans of his cooking will appreciate this collection of recipes from his acclaimed Napa Valley restaurant, The French Laundry. Inclusions in "

" range from how to make soup to the proper way to cook green vegetables and secret tips for fish dishes. The 150 recipes replicate the exact dishes you'll find at The French Laundry. Note, these are labor-intensive recipes and not for the novice chef.

A highlight of any Crystal Cruise sailing is dinner at acclaimed chef Nobu Matsuhisa's Umi Uma restaurant, and fans can re-create many of his dishes at home with "

." You'll find 50 recipes for fish and seafood dishes, all with step-by-step instructions and color photographs. There's also a chapter on pairing drinks with meals and another on sushi, which teaches readers how to make his signature soft-shell crab, salmon skin and house special rolls.

To get a taste of Jamie Oliver's tasty Italian cooking at sea, you'll have to take a cruise on one of just a handful of Royal Caribbean cruise ships, but with "

," you can make some of his tastiest dishes at home. Filled with recipes inspired by visits with nonnas (grandmothers) throughout Italy, you'll find classic traditional Italian dishes, as well as those with names such as corteccia, rafanata, panzanella and stracotto. You'll also find info about a variety of cooking techniques including how to prepare pasta from scratch.

"Essential Pepin: More Than 700 All-Time Favorites From My Life in Food" (Hardcover)

One of the most prolific cookbook writers, legendary chef Jacques Pepin also is Oceania Cruises' master chef and executive culinary director, working directly with the line's executive chefs to direct menus in all of the onboard dining venues. In the "

," Pepin offers some of his favorite recipes including onion soup Lyonnaise-style, linguine with clam sauce and vegetables, grilled chicken with tarragon butter and warm chocolate fondue souffle. The hardcover version of the book also comes with a searchable DVD, which demonstrates all of the cooking techniques you'll need to use.

Known for his Hawaiian-Asian fusion cooking, Roy Yamaguchi is the mastermind behind Asian Market Kitchen on select MSC cruise ships. In "

," he concentrates on the flavors of Hawaii and the Pacific Rim with favorites such as ahi tartare with crispy polenta and teriyaki duck salad with candied pecans and papaya. There are more than 150 recipes, along with about 100 color photos of the dishes and Hawaii's natural beauty, so it also makes for a great coffee table book.

Not actually a cookbook, this colorful book of food art shows what you can do when you take playing with your food to an entirely new level. Rather than cook the food, in "

Cruise Critic is a participant in the Amazon Services LLC Associates Program, an affiliate advertising program designed to provide a means for sites to earn advertising fees by advertising and linking to Amazon.com.