You may also like
Dismiss
How to Prevent Seasickness on a Cruise
5 Cruise Excursions Not Worth Your Money
Windstar Yachts vs. Windstar Sailing Ships
What to Pack for a Voluntourism Cruise
Can I Cruise While Pregnant? What You Need to Know
What Is a Zodiac Boat on a Cruise Ship?
4D Cinema on MSC Cruises
8 Best Ways to Cure a Cruise Hangover
Best Travel Medicine Kits for a Cruise and What to Put in Them
Why You Should Buy 'Cancel for Any Reason' Insurance for Your Cruise 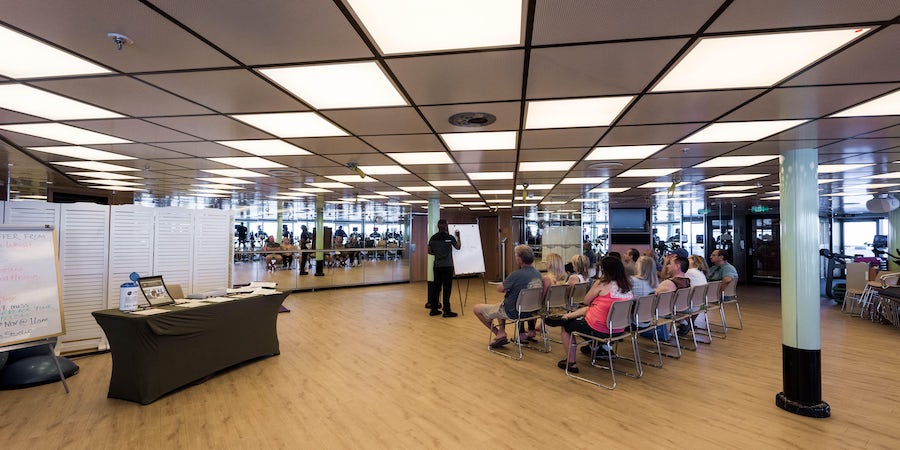 Despite growing numbers of travelers opting for cruise vacations over the past few years, many cruise health myths persist. From a belief that gaining weight is inevitable to a fear that everyone will be sick at sea, common misconceptions refuse to go away.

The fear of being seasick is one of the most commonly cited reasons for people who choose not to cruise, but most need not fear. All large, modern cruise ships have stabilizer technology, which minimizes the rocking and rolling motion of the ship.

Think of stabilizers as similar to the wings on an airplane or to the pole a tightrope walker uses to keep his balance. In rough water, cruise ships extend the stabilizers to help the ship balance and to stop it from rolling from side to side. Less rolling means a smoother ride and less chance of seasickness.

If you're more easily affected by seasickness and worried about it, there are other options as well, including choosing a cabin on a lower deck in the middle of the ship (its natural balance point) or selecting a port-intensive itinerary so you don't actually spend much time at sea.

Over-the-counter and prescription medicines have been proven to be effective against motion sickness, as well.

A common response cruisers hear when they tell friends and family they're going on a cruise is "Aren't you afraid you'll get sick from being in close quarters with so many other people?" What most non-cruisers don't know is ships do an extensive amount of cleaning, especially in high-traffic and high-touch areas. You'll see crew members scrubbing away at stairwells and rails, elevator buttons and bathroom doors several times a day.

You'll find hand sanitizers at the entrance to every food venue, plus crew will ask you to sanitize your hands every time you get back on your ship from a day in port. Many ships also position sinks outside buffet entrances; regular hand-washing is the best way to prevent getting sick no matter where you are.

Speaking of buffets, many cruise lines no longer let cruisers serve themselves, instead either having glove-clad crew members serving the food or pre-plating items so you're only touching the plate you want.

Additionally, when gastrointestinal sicknesses are reported onboard, affected passengers are always asked to confine themselves in their cabin for a few days and the ship's cleaning regimen is increased even more.

Cruising is not akin to being on a deserted island with no one around to help if you find yourself in trouble. All major cruise ships have a medical staff onboard, with a minimum of one doctor and two nurses. To work on a cruise ship, medical personnel must be registered in one of several countries (U.S., the U.K., Canada, Australia, New Zealand, Ireland, South Africa or any of the E.U.-member countries) and have at least three years of postgraduate experience in general and emergency medicine or board certification in emergency, family or internal medicine.

Additionally, the major cruise lines maintain infirmaries with staff available 24 hours a day; infirmaries must adhere to the standards set by the American College of Emergency Physicians. While typically equipped to treat nonemergency conditions (broken bones, cuts and bruises, minor illnesses), they can care for critical cases for the short time it takes to arrange for the transfer of anyone with a serious condition. (Transfers are either via helicopter medivac or during a port call to a hospital.)

Among the equipment you'll find in a cruise ship infirmary will be lab capabilities for testing, oxygen, defibrillators and cardiac monitors.

Even cruisers who've left much-needed medicines at home can get help on a cruise ship. Onboard pharmacies vary by ship but will always have antibiotics, seasickness pills, aspirin and other common medicines, including for gastrointestinal and cardiovascular issues, respiratory problems and ENT infections.

Cruises are famous for the amount of food you'll find onboard, but that doesn't mean you'll gain weight. There are as many ways to keep your figure onboard as there are to pack on the pounds.

At the sit-down restaurants onboard, portions are controlled and items that are low-fat, healthy or low-salt are indicated for you. Plus, your waiter will happily bring you two courses instead of four, appetizer portions of entrees or sauces and dressing on the side.

Also, you can use smart strategies so you don't give in to mindless eating at the buffet. Use smaller salad plates when available to cut down how much food you can pile on our plate. Peruse the offerings and plan your meal before you help yourself, and make a point to add a salad or other healthy options.

Also, cruises offer plenty of opportunities to work off the extra calories you might consume. A cruise vacation encourages more walking than you might normally do at your desk job with walking tours (in groups or on your own) in port and long cabin decks; choose the stairs instead of the elevator for an easy workout. Late-night dance parties and kayaking/cycling/hiking tours in port will also keep you moving. Most cruise ships also have fitness centers (see our next myth).

Active travelers with regular fitness regimes at home often fear they won't be able to keep up their activity level on a cruise ship, but nothing could be further from the truth.

All big cruise ships have onboard gyms, equipped with cardio options (treadmills, ellipticals, rowing machines, recumbent bikes, etc.) and strength training options including a variety of machines and free weights. On newer ships, you might also find TRX equipment.

You'll also find personal trainers and group classes with options that might include yoga, Pilates, spin classes and boot camps. And, if you don't need anyone to guide you, there are always mats and extra space so you can just do your own thing.

Runners can opt for the in-gym treadmills or look for the outdoor jogging tracks, which usually also have a lane for walkers. Plus, top-deck attractions, such as rock climbing walls, basketball courts and pools, provide other options for fitness.