You may also like
Dismiss
8 Lessons Learned From Taking the Kids on a Shore Excursion in Rome
Why Vantage Is the River Cruise Line for You
Cruise Mishaps: 14 of the Worst Ideas Ever in the History of Cruising
Cunard Line History
Costa Cruises History
Cruise Vision 2020: The Future of Cruising in Australia and New Zealand
What Is LNG Gas, and What Are LNG-Powered Cruise Ships?
Why Germ-Zapping Robots and AI Technology Could Be the Future For Cruise Ships
Your Favorite Cruise Ship is For Sale? Here's Why You Shouldn't Panic
What Happens to Cruise Ships That Are Slated to Be Broken Up? 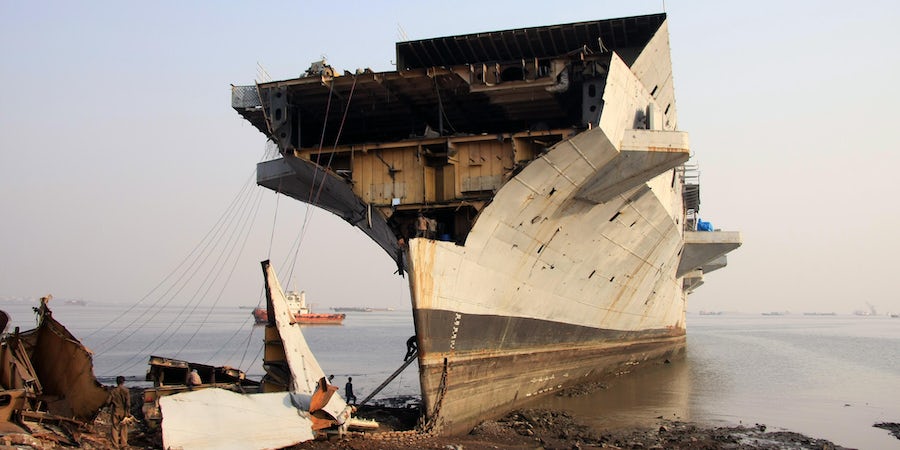 Decommissioned and Abandoned Cruise Ships: What Happens When They Retire to the Cruise Ship Graveyard?

In the cruise industry, we celebrate the birth of new vessels with press conferences and smashed bottles of Champagne, but rarely do we address what happens to retired cruise ships. If you've been wondering where your old favorite vessels disappeared to, here's what you need to know about cruise ship scrapping and graveyards.

What Happens to Old Cruise Ships?

As ships age, cruise lines have several choices, which include extensively refurbishing and relocating vessels to smaller, less popular regions; transferring or selling them to other lines; or sending them to a cruise ship junkyard for scrapping. Ultimately, all ships will be retired and scrapped, with the exception of a few beloved vessels, like Queen Mary, which are turned into hotels or attractions.

The largest cruise ship scrap yard is in Alang, India, and it recycles more than 50 percent of the world's abandoned and decommissioned cruise ships.

"Aliaga in Turkey is a distant second," Peter Knego, journalist and ocean liner historian, told Cruise Critic. "There are also shipyards in China that scrap ships in a dry dock or alongside a berth versus on a beach."

At Alang, ships are either towed to the facility, which is located on the Gulf of Khambat, or sail there under their own power. When they arrive, vessels are run aground on the beach when the tide comes in. Shipbreakers -- the workers who dismantle the ships -- then use machinery to drag them further onto the sand and secure them.

"Most go under their own power if their engines still function," Knego said. "A few are towed, which presents more of a challenge since workers must ensure the tug doesn't get stuck, too. Plus tugs can't muster the speed and power to get the ships as far up the beach."

When this is complete, any remaining fuel is emptied, and interior fixtures, furnishings and other salvageable items are removed for resale before shipbreakers deconstruct the vessels for scrap using a variety of tools and machinery.

"They are stripped of all contents, then gradually cut down and dragged up the beach until the last keel plates are demolished," explained Knego, who features many photos of ships during the scrapping process on his website, Midship Century. "In Alang, there is a marketplace outside the yards where vendors offer up items like toilets, lights, paneling, furniture and navigation instruments for sale.

"Any fuel that can be removed is used to help in the scrapping process (powering winches), burned off or sold for use on other ships."

As for the environmental effects, Knego said they can be a problem, despite strict regulations.

"There are higher standards today, but the beach in Alang is still rather toxic with PCBs, leaked fuel, paint and other toxic substances. The amount varies from yard to yard and how environmentally conscious the specific breakers are.

"In recent years, there has been an asbestos abatement program where the asbestos is burned at extremely high temperatures and buried in sealed pits.

"Abandoned or laid-up ships tend to leak toxins after a while if there is no maintenance or supervision."

Although Knego said some military ships and small freighters have been purposefully sunk for use as artificial reefs, it's an expensive practice that requires vessels to be removed of all harmful substances. Because of that, it's a tactic that has not yet been adopted for cruise ships.