You may also like
Dismiss
Going on an African Safari From a Cruise
8 Reasons UnCruise Adventures Might Be Right for You
Ganges River vs. Brahmaputra River Cruises
Costa Rica and Panama Expedition Cruise Tips
Choosing an Amazon River Cruise
The Best Month to Cruise Hawaii
Can an Expedition Cruise Transform Your Life? You Bet.
Best Months to Cruise the Mediterranean
Guide Us: Expedition Guides Divulge Polar Cruise Secrets
Polar Bear Cruises: Best Arctic Sailings for Polar Bear Spotting 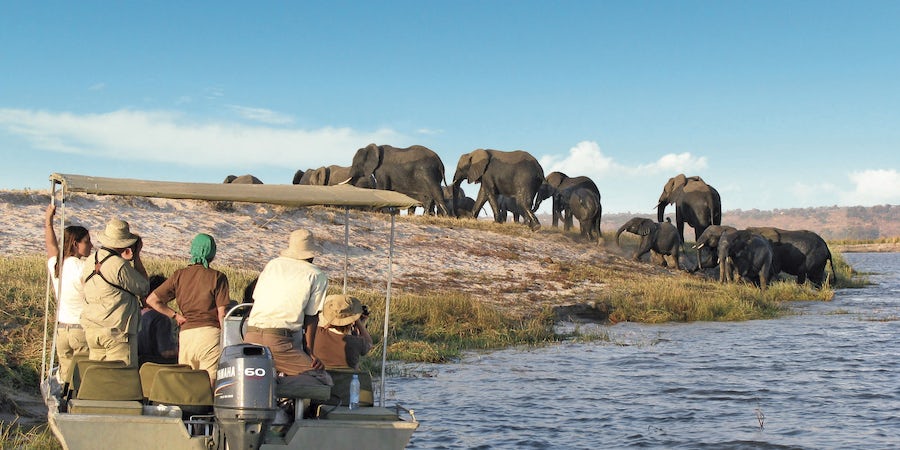 If you ask most people what they expect to see on a river cruise, they are most likely to say historic towns, castles and vineyards rather than elephants, crocodiles and hippos. However, a river cruise in Africa is a world away from a sailing in mainland Europe, and destinations don't get much more exotic than the Chobe River.

Bordered by the Southern African countries of Namibia and Botswana, it might be a little-known cruise destination -- and only a few lines go there -- but it's certainly big on sights. Two- to four-night itineraries all include the wildlife wonders of Chobe National Park and can be combined with longer vacations taking in a cruise on Lake Kariba and a visit to Victoria Falls in Zimbabwe. For an even more in-depth adventure, tack on a land-based safari, rail journey or pre- or post-cruise extension in South African cities such as Cape Town.

The main thing to note is that a Chobe River cruise isn't a traditional river cruise in any shape or form. Vessels explore a 15-mile stretch of river, up to a mile wide in places, with the accent on spotting wildlife, and they don't stop at any large towns or notable ports of call.

This cruise won't suit you if you like full-on cultural immersion, late nights and lively entertainment. However, if you're up for an adventure and looking for an off-the-beaten track destination, you won't be disappointed.

This is a year-round destination for spotting wildlife; however, the scenery changes dramatically with the seasons so there are factors to consider.

The dry season, from April to October, is ideal for a first-time trip to Africa as this is when you are likely to see the most wildlife. As water holes dry up, animals move toward the Chobe in search of water, creating spectacular viewing opportunities. Temperatures soar from August onwards, and peak in October when it reaches 95 degrees Fahrenheit or above.

The wet season, from November to March, is the best time to see migratory birds, large herds of zebra and baby animals. January and February are the wettest months, but don't let that put you off. There are fewer visitors and the showers -- usually in the afternoon -- are heavy but short.

The 28-passenger Zambezi Queen operates its own itineraries and is also chartered by the river line AmaWaterways and tour operator Abercrombie & Kent. It also operates a trio of Chobe Princess houseboats which accommodate up to 10 passengers. Another slightly larger houseboat is the Pride of Zambezi, which carries 12 passengers.

In 2018, the French-owned line CroisiEurope entered the market with a twin-center itinerary -- Namibia and Zimbabwe -- which combines daytime sailings in small boats on the Chobe River. Passengers stay at Cascades Lodge before flying to Lake Kariba to stay on a 16-passenger houseboat African Dream. In spring 2020 it opens its second lodge, Kaza, and launches another identical houseboat, the Zimbabwean Dream.

Due to the nature of the waterway, and with no ports of call, itineraries on the Chobe River are all very similar and much shorter than most mainstream riverboat sailings in other countries.

Two-, three- and four-night cruises are available, and it boils down to how much time you want to spend on the river and surroundings, going on nature walks, game viewing, birding and fishing. Ships only sail during daylight hours and all trips include a visit to Chobe National Park.

The Zambezi Queen sails year-round on stand-alone weekly departures of two-, three- and four-nights. The three Chobe Princess houseboats offer the same sailings throughout the year. These houseboats can also be exclusively chartered, in which case the itineraries are even more flexible as passengers can choose what they want to do each day. The Pride of Zambezi offers two- and three-night itineraries and also operates throughout the year.

CroisiEurope offers a three-night itinerary -- from February through December -- which encompasses daily outings in small safari boats with passengers sleeping at the line's Namibian lodge. Passengers then fly to Lake Kariba for the next part of the cruise-safari vacation.

One of the unique highlights of the Chobe is that are no big cities lining the river and you have a real sense of connecting with nature and being somewhere very remote. Hence, there are no traditional ports of call, and typical days involve safari sailings on the water, slowing down when wildlife comes into view and going ashore for walks or game drives.

Related: Going on an African Safari From a Cruise

Chobe National Park. An undisputed shore excursion highlight is a half-day jeep safari to Botswana's first national park -- now the third-largest in the country -- which has one of the largest concentrations of game in Africa (in particular elephants, buffalo and abundant birdlife). Unfortunately, there are no longer any rhino, but you might be lucky enough to catch a glimpse of cheetah, leopard and Africa's rare wild dog. Knowledgeable guides lead the safaris and halfway 'round there is a refreshment stop, with drinks and snacks on a table spread out under shady trees.

Kasane. This Botswana town is the gateway to the Chobe River and is close to the "four corners" of Africa where Botswana, Namibia, Zambia and Zimbabwe meet. Most folks pass through on their way from the airport to the ship, but if you have time to spare, the colorful craft stands beside the main thoroughfares are good places to pick up authentic souvenirs. And, as there are no fences between the town and adjoining Chobe National Park, you can easily catch your first glimpse of elephants wandering nonchalantly along the side of the road. If time permits, some tours take in the huge hollowed out baobab tree which once served as a prison.

Impalila Island. Get an authentic insight into local tribal life with a walking tour around this island close to the confluence of the Chobe and Zambezi rivers. Small villages are made up of extended families where you can watch women weaving mats from reeds and recycled sacks and see how corn is ground into flour (and have a go if you want). It's a good place to pick up local crafts, including carved wooden animals, bowls and jewelry. A highlight is a joyful dance display (again with the option to join in) where the village ladies wear traditional dresses with multiple petticoats that accentuate their dance moves.

Pack light. The small propeller planes that fly in and out of Kasane have very strict weight and size limits (generally soft bags only, not exceeding 23.6 inches in length, 15.7 inches in height and 11.8 inches in width). If you arrive with a larger case, or a hard-shell suitcase, you'll have to leave it behind.

Leave dressy attire at home. In any case, you can keep it casual when you pack as these sailings are laid-back about attire. Bring T-shirts, shorts, cotton pants, long sleeve tops for protection against the sun, a hat, sunglasses and, most of all, comfortable shoes or sneakers for walking ashore on uneven ground.

Be patient. Prepare to enact this virtue as these trips involve border crossings each time you travel between neighboring countries -- Botswana is on one side of Lake Chobe and Namibia is on the other. It's not a huge hassle, but you just need to be aware that you might have to wait in line in hot weather.

Take binoculars. To get the best views of the multiple wildlife spotting opportunities, you have to bring something with a bit of zoom. Some boats supply binoculars, but you might be happier with your own if you have a particularly good pair.

Buy a spare memory card. Trust us; surrounded by hippos, elephants, crocodiles and birdlife, often at very close quarters, you will take more photos than you ever thought possible. The ships and lodges are in remote spots and there are no nearby shops, so be sure to stock up before you travel.

Related: Going on an African Safari From a Cruise

Prepare to be independent and active. To get the most from a Chobe River cruise you need to be flexible, mentally and physically. Itineraries include embarking and disembarking vessels on fairly rudimentary gangplanks, climbing in and out of safari jeeps and walking on uneven ground. Be realistic about any limitations; otherwise, it could impact your enjoyment and overall experience.