You may also like
Dismiss
10 Fun Cruise Ship Facts That Might Surprise You
Why U River Cruises Is the Line for You
Sail Here, Not There: Avoiding Overtourism in Cruise Ports
Cruise and Stay Holiday Tips
6 Cruise Ports and Regions That Have Banned Sunscreen (and What to Use Instead)
Cruise Vision 2020: The Future of Cruising in Australia and New Zealand
What Is LNG Gas, and What Are LNG-Powered Cruise Ships?
What Is the Economic Impact of the Cruise Industry in the United States?
Why Germ-Zapping Robots and AI Technology Could Be the Future For Cruise Ships
Will I Have to 'Social Distance' on My Next Cruise? 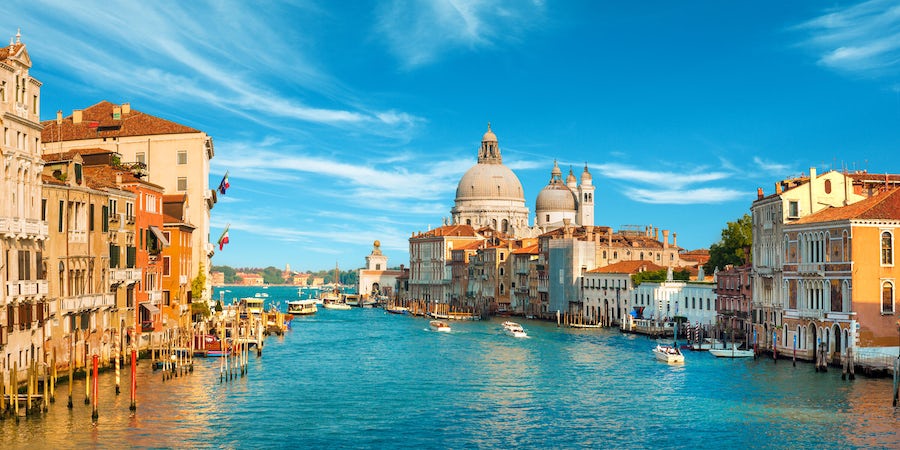 Are Cruise Ships Allowed in Venice? Background on a Historic Port With an Uncertain Future

Venice is the Eastern Mediterranean's most important cruise homeport and the third-largest Mediterranean cruise hub after Barcelona and Civitavecchia (the nearest port to Rome). It's been a maritime power house for centuries and at the center of the European cruise industry's rapid rise since the early 2000s. Although modern sailing entered the picture much later, Venice and cruise ships go back a long way.

But now, conservationists are demanding an end to cruise ships in Venice's Giudecca Canal, the main waterway where vessels enter the city and the famed St. Mark's Square. This is due, in part, to safety fears sparked by what's been dubbed "The Gulliver Syndrome" -- disproportionately large ships that dwarf the city's architecture. The main concern is that large ships wear down the already-sinking city's infrastructure over time.

Claims that cruise ship waves damage the city's fragile foundations have been dismissed by the port authority, according to the 2012-published "To Venice By Sea," a collection of essays about the cruise industry there. Its introduction cites research showing the damage is caused by vaporetto waterbuses and pleasure boats. (Their sharp hulls cause constant small waves, while cruise ship waves have a similar effect to tides, according to port authority research.)

There are no reports of Venetians protesting against vaporettos, but protests to have cruise ships banned from Venice have been going on for several years. They escalated in June 2019 after the collision between MSC Opera and the Uniworld ship River Countess. The river ship was moored at San Basilio Pier; four passengers were injured.

So what is the future for Venice, a port that's a justifiable must-see for its beauty, artwork and canal culture, and one that is on modern must-see bucket lists for many, including Italian-American immigrants' children and grandchildren?

Here, we'll address how cruising became so important to Venice, what the concerns are and where the industry is headed into the future.

Related: Omicron Alert: 6 Tips For Cruising in a COVID-Variant World

Marittima Cruise Port, located on one of Venice's main islands, is among the biggest and best in the Mediterranean thanks to its efficient rail, road and even water taxi links to Marco Polo international airport less than 10 miles away. It was built in the 19th century for freight ships and eventually become home to ferries -- until the idea of shorter holidays at sea emerged in the 1970s when cheap air travel put transatlantic cruise liners out of business.

By 1990, the number of cruise passengers visiting Venice was around 200,000, rising to nearly 350,000 by 2000. Now, the figure is well over 1.75 million a year. Cruise ships sail to and from the state-of-the-art Marittima Cruise Terminal along the scenic Giudecca Canal, which gives passengers an elevated view of St. Mark's Square and the beautiful coral-pink Doge's Palace.

The boom has its roots in the millions invested in the Marittima terminal and transport links in 1997 -- not even the 2008 global recession could stop it. Now, cruise ships are an integral part of the Venetian economy, creating thousands of jobs in the provision of ships that embark each week, as well as in maintenance, repairs -- and of course tourism.

Mainstream ocean cruise lines -- such as Norwegian, Carnival, Royal Caribbean and MSC -- have ships that call on Venice, and as of 2020, ships such as Royal Caribbean's 2,000-passenger Rhapsody of the Seas and the 2,679-passenger MSC Opera homeport there. (Smaller ships often dock at San Basilio Pier on the canal, just outside the main Marittima buildings and within a few minutes' walk of Venice's palaces and churches spanning the 15th through 17th centuries.)

"It is incredibly popular, particularly with American tourists," says Tom Boardley, secretary general at CLIA (Cruise Lines International Association), who is based in Brussels. "A lot of ships homeport in Venice; that is where passengers arrive and leave and often they spend time in Venice before and after their trip. The cruise industry is very good to Venice and lots of people want cruise ships to stay. The Fathers of the City don't want to lose the cruise industry."

But, in recent years, locals have protested that overtourism is turning Venice into a theme park where they can no longer afford to live. They have used shopping trolleys and prams to block the streets in demonstrations against overcrowding and have called for fewer day-trippers and more people staying several nights in the city supporting restaurants and hotels.

Groups such as Generazione '90, young people who say the city is becoming a living museum, want to stop new licenses for tourist apartments, to limit tourist numbers allowed into the city and are in support of the No Big Ships campaign.

Up to 3,000 environmentalists and activists protested against large cruise ships in November 2019, after parts of the city were under 6 feet of flood water. The "No Grande Navi" (No Big Ships) collective are demanding an end to cruise ships using the Giudecca Canal because, they claim, Venice's foundations are being damaged by ships' waves.

Protests have been growing since the mid-2000s, but Boardley points out that only ships up to 96,000 GT (gross tons) can use the canal. "Cruise ships would be more than happy to follow the same channels as cargo ships, but to get to the cruise terminal they would have to use the Vittorio Emanuele Canal and it needs dredging," he says. "There are all sorts of arguments about who should dredge it and where you should put the sediment."

An increase in flooding has also plagued Venice in recent years. Officials have known for decades that the city is sinking -- and flooding is now a regular event. The annual acqua alta (high water) is caused by strong sirocco winds from Africa during unusually high tides. November 2019's record-breaking floods saw cruise ships forced to reroute to nearby ports such as Ravenna and Trieste. But, work on a flood barrier project, dubbed MOSE, is still not complete, even though construction began in 2003.

Flooding has spurred further protests about protecting Venice's infrastructure from outside influence.

Both Boardley and the Venice Port Authority say an incident like Concordia could never happen in the Giudecca Canal because cruise ships are guided in. "The ships move slowly; they have pilots onboard and tugs guide them. The safety of cruise ships going through Giudecca Canal hasn't been questioned," says Boardley.

The regulation on ships over 96,000 GT was actually overturned in 2015 following an appeal by the Venice Passenger Terminal and others, based on a lack of waterway access alternatives. However, cruise lines have voluntarily kept to the 96,000 GT limit.

In August 2019, the Italian government announced that cruise ships over 1,000 GT -- a significant reduction -- would be banned from Giudecca Canal (for reference, MSC Opera is 65,591 GT and, Viking's ocean ships are around 48,000 GT). The announcement caused widespread rumors that all cruise ships were banned from Venice -- but the new regulation has yet to go into effect, mainly because there are no alternative channels to access the Marittima terminal.

Very large cruise ships, such as Royal Caribbean's 5,479-passenger and 226,963 GT Harmony of the Seas, simply don't go to Venice -- although there is talk of building a new terminal for bigger ships outside the Venice lagoon. "The politics of the situation is quite complicated because a lot involves national politics, not just local politics, and it is complicated with new EU regulations about what you do with sediment when you dredge, because it could be quite toxic," explains Boardley.

Another reaction to overtourism, in the form of a Venice tourist tax, was also not immediately introduced. "It was going to be implemented in 2019, but they couldn't sort out how to charge people coming by rail," says Boardley. The 5 euro tax is now expected to start in July 2020.

Future of Cruise Ships in Venice

Boardley accepts that there are too many tourists in Venice, but says: "Cruise passengers are controlled because tourist officials know exactly when they are coming and where they will be." He has nothing but praise for Marittima cruise terminal's efficiency and transport connections, and points out that cruise ships are no longer bringing ever-increasing numbers of tourists to the city.

"The capacity hasn't grown in the last few years. They can't bring in bigger ships. If you were to expand the capacity you would develop ports on the other side of the lagoon."

Despite this, with well over 20 million visitors each year (including land visits), overtourism has led to fears that Venice will join UNESCO's endangered list.

Back in June 2019, CLIA issued a statement urging all parties in Venice to "prepare the Vittorio Emanuele Canal so we can begin to reroute the larger ships" to Marittima. But, there appears to have been little progress in terms of new regulations or alternative channels.

For the moment, at least, it seems there will be little change for cruise passengers visiting Venice.