You may also like
Dismiss
Caribbean Cruise Destinations: Which Islands Are Where
Hurricane Irma: A Look Back At the Storm
Hurricane Maria: A Look Back at the Storm
Countries That Require Visas for a Cruise
Best Cruise Ports for Ziplining
Busiest Cruise Ports: How to Avoid the Crowds
Sail Here, Not There: Avoiding Overtourism in Cruise Ports
The World's Best Beaches to Visit on a Cruise
10 Things You Should Never Do on a Cruise Line Private Island
The 10 Most Popular Episodes of “Cruising with Jane McDonald” 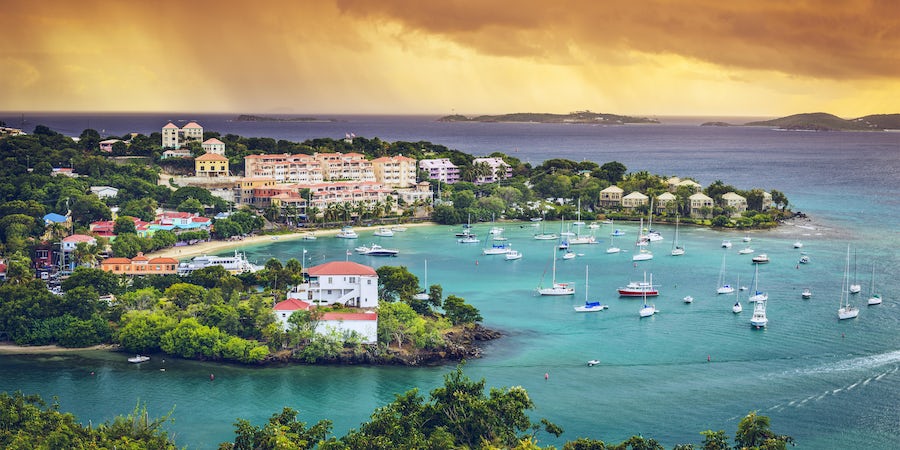 Sailors, cruise passengers and island-lovers have had a centuries-long fascination with the Virgin Islands, an archipelago of low-slung isles rising out of the waters between Puerto Rico and St. Kitts. The largest and most well-known of the island groupings are the British Virgin Islands (BVI) and the U.S. Virgin Islands (USVI), two overseas territories of Great Britain and the United States, respectively.

Today, travelers visit the BVI and USVI for the snorkeling, diving and sailing; for fishing and national parks; and even for resort getaways, though the biggest draw of the Virgin Islands are the white-sand beaches and turquoise waters. But what's the difference between the British and U.S. Virgin Islands? Is there one?

Cruise Critic is here to take a look at the BVI versus USVI and what gives these cruise ports their individual flavors.

Which Islands are Part of the U.S. Virgin Islands?

Officially known as the Virgin Islands of the United States, the USVI is made up of three main islands:

Water Island is often considered a fourth, and many cruise lines offer shore excursions there, along with Buck Island. The three major islands and outlying cays have an area of 133.7 square miles.

Which Islands are Part of the British Virgin Islands?

BVI is made up of approximately 60 islands, islets and cays, the largest of which is Tortola, where the capital of the British Virgin Islands, Road Town, lies. All told, the BVI encompasses about 58 square miles, making it smaller and more compact than the USVI. The major cruise port of the BVI is Tortola, with small ships visiting Virgin Gorda and Jost Van Dyke.

Ships call on other islands in the BVI but typically through shore excursions and private charters.

Visitors from the U.S. find one huge difference between the USVI and BVI: passports. The USVI does not require passports from Americans -- it is a U.S. territory after all -- but a visit to the BVI does require a passport. But, that's far from the only distinction visitors find between the BVI and USVI.

The historic influence of Great Britain (on BVI) and the Dutch, French, Spanish and now U.S. (on USVI) have created differences in culture between the islands -- from manners to service levels to small cuisine differences -- some of which helped shape the current face of tourism in the USVI and BVI.

On the BVI, the lack of tourists makes the islands something of a throwback, and the sailboats dotting the horizon, the colorful West Indian homes, the boutiques (which brim with local flair) and the posh luxury resorts exude the sense of yesteryear Caribbean, as if you're among the first of the tourists to discover this place. The distinct lack of chain restaurants and shopping options -- save a handful of top-end luxury brands -- deepen the local flavor, though the haute brands and luxury resorts are telling of a higher price tag on nearly everything when visiting the BVI. Beach purists love the British Virgin Islands for the vast, unbroken-by-boardwalks-or-tourist-shacks stretches of sand, and sailors flock to the country for this same forgotten feeling of an unblemished Caribbean.

The USVI has many of the comforts of continental U.S., meaning you'll recognize a number of restaurants, shops, brands and ways of life. Abundant shopping and dining options cater to American tastes in terms of style, palate and availability. St. Thomas tends to be busy and industrious, in some ways more like a small American city than a Caribbean island, and traffic in Charlotte Amalie will feel more like home to many U.S. visitors as it grows congested at rush hour. Beaches on St. Thomas are likewise more American, meaning you're seldom far from a T-shirt shop, snack shack or rental hut, and there are many boardwalks found around the island.

On St. John, Virgin Islands National Park takes up 23 square miles -- more than half the island. Accommodation, dining and shopping options are fewer here, with many businesses catering to park visitors.

Similarities Between the Virgin Islands

A vacation paradise, both sets of Virgin Islands attract cruise passengers and holidaymakers from far and wide. They come for the beaches, the diving (reefs, wrecks, natural rock formations) and the weather -- perfectly tropical. They also come on cruise ships to explore islands and ports one excursion at a time.

In both the USVI and BVI, you'll hear an English Creole as the primary spoken language, though it's not uncommon to hear French or Spanish Creole as well. Both nations use the U.S. dollar as their currency. And, in both nations, the cars drive on the left, as in Britain.

The similarities don't end there. The cuisine of the collective Virgin Islands is tropical, hearty and spicy, with an emphasis on seafood. Dishes such as callaloo -- a stew of okra, callaloo leaves and meat -- and fungi (not like the mushroom, but pronounced "foon gee," which is boiled cornmeal and okra served with saltfish) -- are staples. Tea made from indigenous plants and rum (sugarcane plantations proliferated in both the BVI and USVI, and the legacy stands today) are everywhere. Rum brands -- Sailor Jerry, A.H. Riise, Calico Jack and Cruzan -- are also well represented in restaurants and bars.

Weather-wise, the BVI and USVI are nearly indistinguishable. The temperature ranges between 70 and 95 degrees Fahrenheit. September to November are the wettest months of the year, with a risk of hurricanes.

Further south on the Virgin Island of St. Croix, the architecture departs from the West Indian and Americanized styles on St. Thomas and St. John, and the city of Christiansted features European-like homes closer to the BVI, reflecting the island's past.

Which Ships Call on the USVI?

On St. Thomas, ships dock in the capital of Charlotte Amalie, just across the bay from downtown, where it's not uncommon to find four, five or even six ships in port at once. These are the mega-ships, with anywhere from 2,500 to 5,000 passengers or more (yes, Royal Caribbean's jumbo Oasis-class ships dock here). Norwegian, Carnival, Celebrity, MSC, Holland America and many more call on St. Thomas.

On less-frequented St. Croix, ships dock at Frederiksted (on the western coast) and Christiansted (on the northeastern coast), though smaller ships will anchor at Gallows Bay Dock in Christiansted, rather than the larger facility built for big ships. St. Croix sees its fair share of cruise traffic though, with most ships that call on the port running in the 3,000-passenger range; Celebrity Cruises (Celebrity Equinox) frequently calls on St. Croix, though ships from Royal Caribbean and Norwegian are often in port.

St. John does not offer a port for large ships, but there's a small port in Cruz Bay (which is also called Love City) where ferries and smaller boats dock; ferries run regularly between St. John and St. Thomas. Cruise passengers who call on this port are frequently on much smaller ships, such as those from SeaDream or Silversea.

Which Ships Call on the BVI?

Most of the ships here are in the 2,000- to 3,500-passenger range, and only on occasion do you find more than two large ships in port at a time. Royal Caribbean, Costa, Norwegian, Carnival and Disney Cruise Line tend to be the biggest of the ships here. Smaller ships -- such as those from Star Clippers, Windstar, SeaDream and Silversea -- represent the other end of the scale.

In Tortola, the larger ships dock at Road Town, the capital city, where much smaller vessels will find a home in Soper's Hole Marina. On Virgin Gorda, the third-largest (and second most populous) island, ships call on Spanish Town or more commonly drop anchor at Virgin Gorda Yacht Harbour, where tenders carry passengers to shore, (though most often it's ferries and charter boats that bring visitors to the island).

What is There to Do in the USVI?

In the U.S. Virgin Islands, cruise lines offer shore excursions to a variety of beaches, to the national park and to snorkel/dive sites along with other activities such as shopping and ziplining. On St. John, Trunk Bay is consistently voted one of the best beaches in the world, along with Maho Bay (a haven for sea turtles, rays and others). Magens Bay, a heart-shaped beach in St. Thomas, is world-famous.

On St. John, in and around the national park, there are beaches for lazing and snorkeling, hiking trails, bike routes, mill ruins and even Indian petroglyphs.

More adventure awaits on St. Croix, where ATVs and rum factory tours are available, in addition to historical/cultural excursions --- and don't forget about the incredible food scene.

What is There to Do in the BVI?

In Tortola, you can shop, scuba, take a stunning helicopter tour or hike Sage Mountain, though many cruise passengers opt for day trips out to the renowned beach bars of Jost Van Dyke or the natural wonders of Virgin Gorda.

The main draw in Virgin Gorda is a collection of massive granite boulders on the beach and in the sea called "The Boulders."

On the lesser-visited islands, there are beaches to explore; reefs, wrecks and rocks to dive and snorkel; and a few resorts and accommodations.