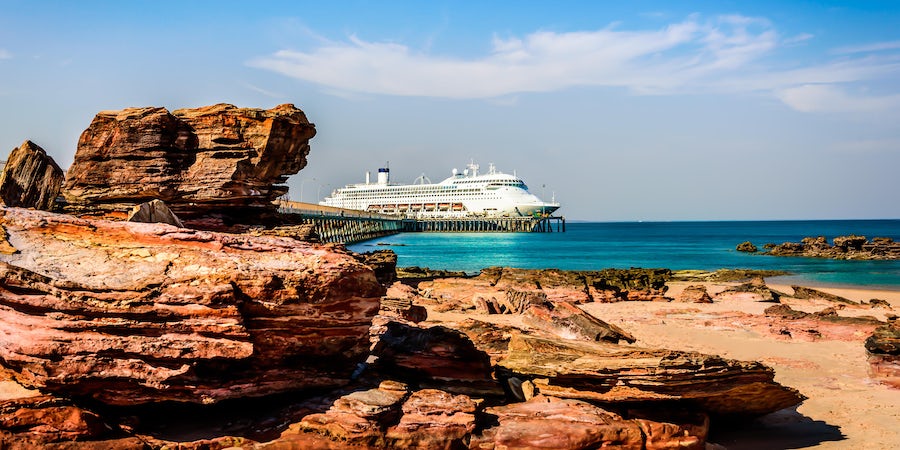 Aboriginal tours can give visitors to Australia a rich insight into the world's oldest living culture. Here are seven of the best Aboriginal cultural experiences offered near cruise ports in Australia.

Take a 90-minute walkabout in The Rocks, within walking distance of Sydney's Overseas Passenger Terminal. This 100 per cent

was developed by Margret Campbell, a Dunghutti-Jerrinjah elder, and is led by Aboriginal guides who have her permission to share her cultural knowledge. Discover how the ancient Aboriginal Dreamtime is still alive within modern Sydney and how the billion-year-old harbour, waterways, flora and fauna continue to influence how Indigenous people live today.

Aboriginal Cultural Cruise with Tribal Warrior. Hear stories of the Cadigal, Guringai, Wangal, Gammeraigal and Wallumedegal people of Sydney Harbour onboard the two-hour cruise, where you will learn about Indigenous culture and the history of Sydney through traditional performances and ceremonies. The cruise also includes a tour of Clark Island National Park, where participants will experience traditional fishing methods and forage for food. The day culminates with an exciting Indigenous cultural performance. This is Sydney's only Aboriginal-owned and operated

When the Walker brothers walk out into the shallows of Kuyu Kuyu (Cooya) Beach brandishing spears, they are following in the footsteps of their ancestors. The Indigenous-led Kuku Yalanji Cultural Habitat Tours, one of the most popular in Tropical North Queensland, is a custom fishing day for the Walker family, who invite visitors to join them on their daily jaunt onto the mudflats to catch giant crabs and discover how they care for their country and its precious resources. As well as learning about the pristine environment and its three diverse ecosystems -- beach, mangroves and coastal reef -- visitors get to walk around tidal lagoons where underwater fields of sea lettuce keep the dugongs happy. If you're lucky, you might even get to eat the bum of a green ant, to ward off coughs and colds. Kuku Yalanji Cultural Habitat Tours is 100 per cent Aboriginal-owned and operated.

Pudakul Aboriginal Cultural Tours will take you off paved roads to follow a thread of the Adelaide River at the World Heritage-listed Kakadu National Park, just 50 minutes' drive from Darwin in the Northern Territory. Indigenous guides will share their knowledge to give you fascinating insights about their culture. Cultural tours include clap stick and didgeridoo playing classes, spear making and throwing, dilly bag and basket-weaving plus guided walks and talks. A trip to the Top End should also include a Croc and Culture Tour or a Wetland Discovery Tour, where you will see an abundance of birds, crocodiles and other animals in their natural habitat.

is 100 per cent Aboriginal-owned and operated.

Kerry and Trevor Stack come from Nyungar country in the south-west corner of Western Australia, where archaeological evidence shows their people lived for at least 45,000 years. The couple run day tours such as the

, which celebrates Nyungar culture and tradition and educates visitors on how to identify food and medicine in the bush near Mandurah. During the Goolamwiin Day Tour, Kerry and Trevor detail how to extract food from the poisonous zamia palm -- you must soak the nut for a week to leach out the poison -- demonstrate how to make a kodja (axe), cook kangaroo over an open fire and make damper in the ashes. The Indigenous couple also shares what little language they know (their parents and grandparents were forbidden to speak their local dialect), play traditional games and tell stories about the Wagyl, the Dreamtime serpent.

A Taste of Broome

Experiencing this tour is like dabbing at a canvas, colouring it with different ochre paints and pigments based on the Indigenous mix of cultures unique to the community of Broome. A total of 84 Aboriginal communities live in the Shire of Broome. Expect to absorb some of Broome's Indigenous history through the music, dances, songs, stories and pictures presented by members of the local community.

A Taste of Broome

, presented by Goolarri Media Enterprises, also aims to celebrate the culture through its cuisine, with guests enjoying dinner under the stars while enjoying traditional and contemporary dance performances and an open-air cinema screening of films that tell Broome's story from an Indigenous perspective.

Wander around Melbourne's Royal Botanic Gardens with an Indigenous guide and you will very quickly feel like your understanding of Australia's First Nations people has improved. The fact the tour is in Victoria's capital city of Melbourne means it's easily accessible before or after a cruise, or if you're heading ashore for a day. As well as discovering how native plants grow at the gardens, you can taste canapes inspired by the native plants seen on your walk that have been prepared by trainee Indigenous chefs from Charcoal Lane, a social enterprise restaurant that specialises in native Australian ingredients. The

includes a smoking ceremony, a ramble around Kulin country and talks about traditional tools, food and medicine.

Get out on the traditional waters of the Gadigal people in a Koori canoe to connect with the extraordinary story of 60,000 years of Aboriginal life and culture in the harbour, shared today with modern cruise ships. Available for two hours, a half-day or full day, the

passes White Bay Cruise Terminal and includes a stop at Goat Island. Uncle Mark Merriman, lead elder of the Pyrmont/Ultimo area, is one of the few people who remembers the Muddy Hill Mob community that were removed in the early 1980s. From first-hand experience, he shares a largely untold history of post-colonial Aboriginal life, including the state's boys homes and prisons. Larger tours and whale-watching can also be organised on tall ships or old harbour ferries.