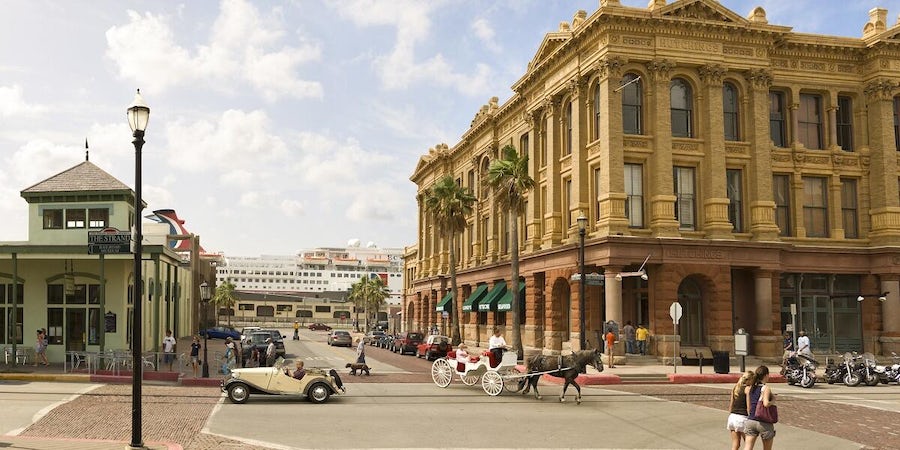 Now the fourth-largest cruise port in the United States, historic and lovely Galveston packs an amazing number of attractions onto a 64-square-mile barrier island. The drive-to port (a favorite among Texans!) offers year-round departures, with one of the biggest cruise ships in the world, Allure of the Seas, set to sail from Galveston in fall 2021 -- coinciding with the completion of a new, state-of-the-art cruise terminal.

Whether you drive or fly to Galveston, it's worth spending an extra couple of days here, before or after your voyage. Here's what to do. And where to eat. And drink.

If you're a beach bum and have a whole day…

Sinking your toes deep in the sand is one of the great pleasures of going to the coast -- and, lined with 32 miles of beaches, some of them encompassed by multiple beach parks with extensive amenities, Galveston's got options. It's a place with a beach for every personality and mood. Looking to get active? Try Galveston Island State Park, where you can hike or mountain bike along more than 4 miles of trails, along the way spotting herons, ducks and barges plying the waters just beyond Dana and Carancahua coves. In calm, sheltered waters, you can also launch canoes and kayaks, go crabbing or fish from shore (no license required).

And if you're looking for live music and some dancing (perhaps while imbibing a beverage or two), the boardwalk and stage at East Beach host festivals and bands -- this is also one of the only beaches on the island to allow alcohol. And for a relaxing afternoon in the sun, right in the heart of town along the seawall, you can join the locals at Babe’s Beach -- find your spot in the sand, then wander over to nearby bars and restaurants when you’re ready for a bite.

Adrenaline courses across this barrier island, starting at its famous seawall. Set on stilts over the Gulf of Mexico, the Galveston Island Historic Pleasure Pier celebrates the century-old days when visitors from across the nation flocked to the town's famous Seawall Boulevard to revel in its carnivals and casinos and overall good times. Surrounded on three sides by the sea, caressed by salty breezes, with gulls circling overhead, you'll find fun for all ages, from swirling teacups and bumper cars for junior riders, to the loops and swoops on the Iron Shark and the Cyclone, coasters that will thrill even hard-core enthusiasts.

And if you're looking to make a splash, spend a sunny afternoon at the Schlitterbahn Waterpark. Scream down their speed slides (including Cliffhanger, and Rohr!) and one of the world's tallest water coasters (MASSIV Monster Blaster), or take it easy on the interlocking system of three lazy rivers -- then head to the swim-up bar. Or stay completely dry by gliding on a gondola overhead (the Soaring Eagle), or just settling into a poolside, private cabana for the day.

If you're into history, and have a half day or more…

We love taking a deep dive into history, and if you do too, spend a morning walking the well-manicured East End Historical District. Here you'll find blocks and blocks of 19th century Victorian and Greek Gothic homes -- a walk here feels like a trip back to an era when Galveston shipped more cotton than New Orleans, and was known as the "Wall Street of the South." Wander among the rambling homes with wrap-around front porches and gracious balconies and swaying sycamores, the architecture and stature of the structures all testifying to a time when this Texas town was home to more millionaires than New York City. Make sure to take a tour of Bishop's Palace, an imposing stone castle built in 1892 to house a prominent family of 11, and later home to the Roman Catholic Diocese -- join a group or schedule a private tour (at least a week in advance) to explore its hidden corners and secrets.

Related: Things to Do in Galveston Before a Cruise

Then spend some time in Galveston's museums. The Bryan Museum displays the vast and eclectic collection of J.P. Bryan -- far from dusty, a visit here is like a ride into the wild, wild west. The museum's 20,000-square-foot exhibition space is filled with scale models of battles and colorful saddles, original Andy Warhol paintings, as well as tablets that zoom you in for a closer look at the items behind display cases. And in a town surrounded by water, the Texas Seaport Museum teaches about this island's nautical and seafaring history, and it has its own ship -- make sure to board the three-masted tall ship Elissa. A (whistle) stop at the Galveston Railroad Museum, right across from the cruise terminal, is also worthwhile. Tour the model railways, collection of dining car china, diesel locomotives and 40 pieces of rolling stock -- and, every Saturday, you can actually take a train ride from here in an open-air the Harborside Express caboose. All aboard!

If you're into fauna (and flora) and have an afternoon…

We could spend a whole day (or more) at Moody Gardens. It's not surprising that the triple pyramids, which form a distinctive profile on Galveston's skyline, draw millions of visitors every year. Each of the glass structures is packed with attractions. One pyramid holds a 1.5-million-gallon aquarium swimming with thousands of marine mammals and fish from the Gulf of Mexico, as well as the Atlantic, Pacific and Caribbean, including sharks, seals, and adorable, wobbly little penguins. Walk underwater and try to capture the perfect photo with a stingray, shark or turtle overhead.

The Rainforest Pyramid transports you to faraway lands, wrapping you up in the mystique of the jungle. Fully immersive, you'll feel the humidity, and amble down boardwalks shaded by massive, tropical plants, and discover interactive experiences with strange and wonderful animals like giant Amazon River otters, rare plants like the corpse flower, as well as adventures in bat caves and the spray of flowing waterfalls. The third, Discovery Pyramid, houses a museum with rotating scientific and cultural exhibits. On site, you'll also find a hotel, waterpark, golf course, beach, zip line and five-tiered ropes course.

If you're hungry (or thirsty), and have an evening…

Whether you're looking for award-winning cuisine or just a cool drink by the beach, this is a town with choices. With fresh seafood from the Gulf, Texas-sized steaks, and Southern fare, and casual waterside boardwalk bars, you could spend weeks here and still have more to taste. We think Rudy & Paco is a can't-miss, with its unique, Latin American twist on meat and fish (and OpenTable agrees, naming it to its list of America's Top 100 Restaurants). Its ceviche corinto, made with marinated red snapper from the Gulf, is legendary.

Try some truly great gumbo at Little Daddy's, as well as fresh local oysters at The Black Pearl (our recommendation: Top them with crab or shrimp), and upscale brunch at BLVD (think Cajun eggs benedict, complete with Andouille sausage, and a full menu of mimosas). And if you just want some dive-bar beers paired with salty breezes, settle into a table at one of several beachfront patios at The Spot, along the seawall. Or take things a step (and spoon) further with a four-hour Taste of the Strand Food Tour, which includes multiple tasting stops throughout Galveston's downtown historic district.

If you have a half (or full) day, and want some outdoor recreation…

Surrounded by water, lined with piers and spotted with a wide variety of landscapes, this island is the perfect place to get outside. Those looking for an aquatic adventure can choose one of three circuits on the Galveston Island State Park Paddling Trail. the shortest, Dana Cove, takes kayakers and canoeists through 2.6 miles of calm passages behind the breakwater, along sea grass beds colonized by all sorts of coastal bird life, while the longest, 4.8-mile Oak Bayou, offers similar scenery, but just a bit more of it. Stand-up paddleboarding is one of America's fastest-growing sports, and the Galveston Paddleboard Center offers a whole different experience on these protected passages, with board rentals and even lessons. And here, you can even hang 10, Texas-style. Surfers, boogie-boarders and kite surfers congregate at the beaches along the seawall, right in town, riding waves created by prevailing winds and the system of sandbars and troughs, just offshore.

With all sorts of habitats (wetlands, bays, ponds, marshes and forests) and set on several main migration routes between North and South America, Galveston is also a birder's paradise. Spot terns, gulls and black skimmers in the East End Lagoon, and unusual and migrating birds in the Corps Woods. As many as 137 species of songbirds have been recorded at Lafitte's Cove.

And you can get hooked here, too. Fish from shore or the many docks that line this island (including the Seawolf Park Fishing Pier), or even better, book yourself onto a charter. With multiple operators taking amateur anglers out to bay, or the deep sea, you can have the thrill of hauling in amber jack, trout, snapper, dorado, grouper, and even sailfish and big tuna.