You may also like
Dismiss
New Cruise Ships on Order
5 Ways to Get a Cruise Ship Cabin Upgrade
12 Things Not to Do in Your Cruise Room
Unsold Cruise Cabins: How Cruise Lines Fill Them and How You Can Snag One
Royal Caribbean's At-Home COVID-19 Test Kit: How Does It Work Before Your Cruise and Is It Worth It?
6 Tips for Booking a Shore Excursion During COVID-19 (Including Omicron)
Just Back from the Arctic with Hurtigruten: Following in the Footsteps of Susan Calman
I'm On A Luxury Cruise During Omicron -- and So Far, Things Are Going Great
The 673-day Cruise Industry Battle With The CDC Over Its COVID-19 Conditional Sail Order
18 Adventure Activities You Didn't Know You Could Do on a Cruise Ship 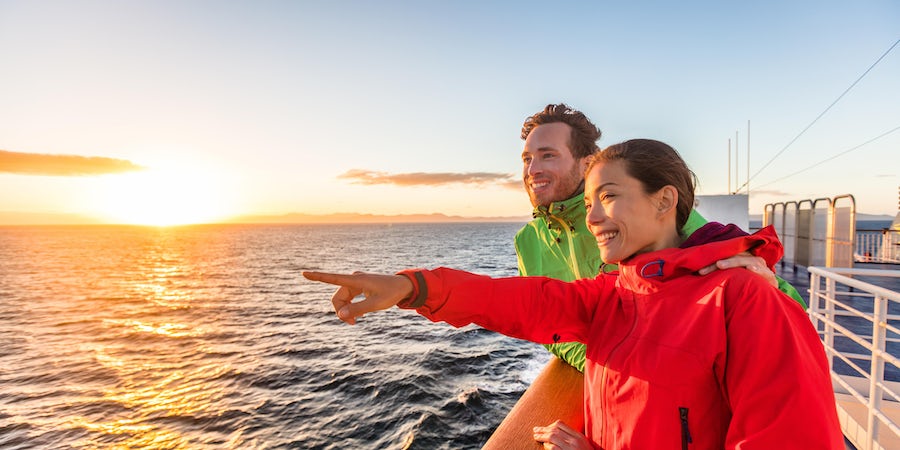 How Do You Create a New Alaska Cruise Experience?

Caribbean? Been there. Mediterranean? Done that. Even Alaska’s evocative Inside Passage, where cruise lines large and small sail each summer, seems to represent well-trod sailing waters, where new adventures for a discerning audience might be hard to craft. But in 2021, Victory Cruise Lines is hoping to do just that.

Acquired by the American Queen Steamboat Company in 2019, Victory has until now focused on Great Lakes itineraries aboard a pair of 202-passenger, all-inclusive sister ships. During the acquisition, the possibility for a third vessel became available. The new ship, Ocean Victory, is under construction in China for March 2021 delivery, and the 49th state rose to the top of the list where the new vessel could be best utilized.

“I’ve always wanted to go to Alaska,” explains American Queen CEO John Waggoner. “When the opportunity for Ocean Victory came about, I told them I’m willing to put my money where my mouth is.”

Why a New Ship Matters

In most ways, Alaska is a mature destination for the cruise industry. There are entrenched players that have as many as eight ships sailing in the state each summer, carrying up to 4,000 passengers. In all, more than 1.3 million cruisers ventured to Alaska in 2019. Concentrated into a five-month season, visitors to major ports such as Ketchikan and Juneau do not always find the wild frontier they might hope for in their Alaskan vacation.

An ambition to enter this crowded market might seem surprising for someone like Waggoner, whose cruise experience has been focused on America’s inland waterways. But the CEO has a bachelor’s degree in marine biology from California Polytechnic State University, and his career on the water actually began by working on sports fishing boats.

Related: The Bahamas As You've Never Seen It, From A Luxury Crystal Cruise

“I still go fishing once a year,” he adds. “I just love being on the ocean.”

The Infinity-class vessels being built by Miami-based SunStone Ships for Victory are key to making Alaska accessible in a new way. Ocean Victory is a top-of-the-line expedition ship incorporating an X-bow design with an ice-class hull, and Rolls Royce Zero Speed Stabilizers to reduce rolling and provide a quieter, smoother ride. The ship also has a dynamic positioning system allowing Ocean Victory to maintain position without using an anchor, minimizing the impact to Alaska’s precious marine environments. A low draw will make remote bays and inlets accessible — places that aren’t reachable by the larger ships that most cruisers use to see Alaska.

“As a physical platform, it has all the latest amenities,” explains Waggoner. “Ocean Victory is a really great piece of hardware, such a cool boat for this unique operating environment.”

Many lines that operate expedition cruises in Alaska use older vessels, and physical spaces can be cramped. By contrast, Ocean Victory has two restaurants, an open-deck dining area, piano bar, library, gym, heated outdoor pool, spa and Jacuzzi, and an observation lounge. All of the cabins offer ocean views, and eighty percent have balconies — a rarity on most of Alaska’s expedition ships.

Carrying just 200 guests and a crew of 100, Ocean Victory will also have along approximately 20 naturalists from Waggoner’s alma mater Cal-Poly — aboard to lead expeditions in the 20 Zodiacs or dozens of kayaks the ship carries. Between excursions, educational lectures and learning lounges will provide additional guest resources.

“You won’t be with the larger ships where you have thousands of people disembarking,” says Ares Michaelides, president of American Queen Steamboat Company and Victory Cruise Lines. “This is for people who want a more intimate experience, and for those who say, I don’t want the crowds anymore.”

“It’s probably a phase two trip for a lot of people who’ve been to Alaska previously on a cruise,” adds Michaelides. “So we have looked at what can differentiate us, and how we engage our guests. The Zodiacs and kayaks will get you up close and personal with the wildlife and natural environment."

To make the most of the unique operating environment, Waggoner engaged with Alaska pioneers such as Victory's small-ship captain Michael Bennett and David Giersdorf, a veteran Alaska expert. Together, they crafted itineraries that will go deeper inside the Inside Passage, to remote bays and inlets that are rarely seen. Additionally, Waggoner specified that the pillars of the American Queen and Victory operations — destination-focused enrichment — be preserved.

“It’s an immersion into the nature and the science of Alaska,” says Waggoner. “But instead of the Antebellum South that guests experience with American Queen, we’ll also be bringing in the history of the gold rush, the fur trade, and of native Americans that live in Alaska.”

Guests embarking on an Ocean Victory cruise will have a choice of 12- and 13-day itineraries, each of which includes a hotel overnight in either Vancouver (for northbound sailings) or Sitka, Alaska (for southbound). But although there’s a general route that itineraries follow, each trip will have a flexible schedule. The captain will look for the best sailing conditions, in consult with the expedition team seeking optimal wildlife sightings. Further, as not every group of guests on board is quite the same, there will be a collaborative effort to cater to individual interests, be it birds, whales, or on-shore wildlife. Guests and crew will live in the moment, seeking opportunities, rather than adhering to a strict port schedule.

Where You'll Go and Who You'll Meet

Some of the unique places to be visited include one of Canada’s remote marine parks, the Fiordland Conservancy, which brims with wildlife along the shoreline. At the park’s Kynoch Inlet, a waterfall plunges into the fjord, and yet this wilderness is inaccessible by road. While larger ships all call on Ketchikan, Alaska’s southernmost port, Ocean Victory will also visit lush Metlakatla just south. It’s a 1,400-strong community of the Tsimshian people, where a welcome dance is performed by one of Alaska’s most celebrated groups.

Related: Small Ship Vs. Big Cruise Ship In Alaska: Which Vacation Is Right For You?

In the Russian-founded community of Wrangell, guests will explore the Stikine River Delta, abundant with wildlife, and Victory will obtain bear-viewing permits for Anan Creek, where a pink salmon run in July and August draws black and brown bears. Alaska’s Norwegian community is encountered in Petersburg, where optional float plane trips to see LeConte Glacier from above are followed by a cruise to the glacier’s Iceberg Grotto. Ocean Victory also travels through Frederick Sound, a prime destination for viewing whales, such as orcas and Dall’s porpoise, with the Zodiacs employed to seek out spectacular bubble-net feeding of humpback whales.

Waggoner says the place he is most looking forward to seeing is Gut Bay, an inlet on the east side of Baranof Island, marked by craggy mountains and plentiful solitude. It’s a place that Alaska native Giersdorf played in as a child.

Such premium experiences — off-limits to most cruise lines — do not cater to mass-market operations. As such, Victory cruises will command a premium. But with just 12 sailings planned for the inaugural season, only 2,400 guests will have the opportunity to reach these unforgettable locations. Victory Cruise Lines is promising that relatively small group an exclusive, immersive adventure to America’s last great frontier.

A native of San Diego, David Swanson has sailed on all of the big-ship cruise lines, but most enjoys the undiscovered ports and offbeat journeys of smaller cruise vessels. His writing and photography has been featured in the pages of National Geographic Traveler, American Way, and the Los Angeles Times for more than 20 years, and he has served on the Board of Directors for the Society of American Travel Writers since 2009.

**We have had so much fun learning more about Victory Cruise Lines' expansion plans and experiencing its authentic style of travel on our St. Lawrence Seaway cruise. To read more, check out all our stories in Cruise Critic's "Travel Farther, Travel Deeper, with Victory Cruise Lines" series, that focus on this innovative cruise line.