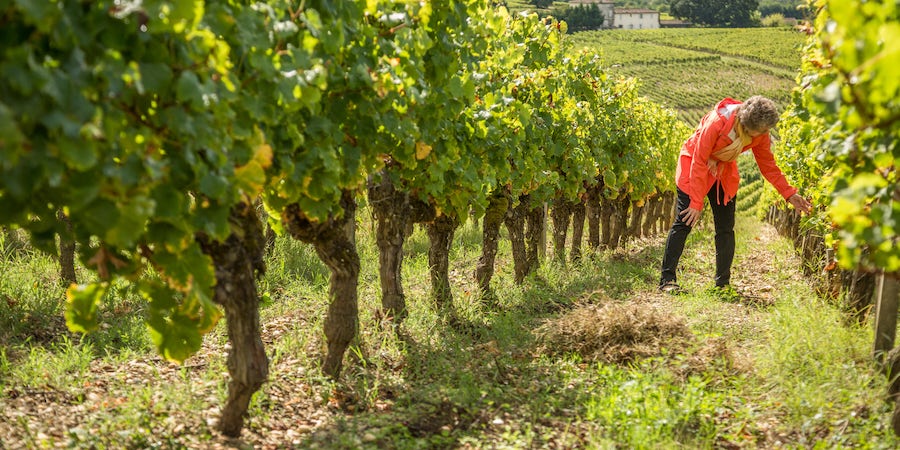 Europe’s rivers attract travelers for their scenery, their history—and their wine. AmaWaterways’ Wine Cruises showcase all three. The special sailings are hosted by a Who’s Who of leading U.S. wine professionals, including winemakers, educators and vineyard owners. The experts typically bring their own wines on the cruise to feature along with vintages from the local region. That allows travelers on a Rhine River cruise, for example, to compare a Riesling from the Pacific Northwest with one grown in the vineyards the ship is passing.

“It’s like having a guide helping you through this maze of local food and wine,” says Liz Barrett, who holds a Certified Specialist of Wine designation and helps arrange the cruises for AmaWaterways. These special trips account for about 10 percent of all the line’s sailings.

Typically, wine hosts lead three lectures during a cruise, and arrange a winemaker’s dinner featuring a meal paired to the bottles they’ve brought aboard the ship.

For passengers, it’s an exclusive, immersive experience. But for winemakers, it’s a treat too. Many return year after year, eager to explore a new region with travelers, who often are customers of their winery.

In 2020, the cruise line will be offering dozens of wine river cruises, including several sailings of the Taste of Bordeaux and the Colors of Provence itineraries in France. In addition, there will be wine cruises on the AmaMagna, the cruise line's largest and most luxurious ship, which sails the Danube. Winemakers also will host cruises on the Douro, Moselle and Main rivers.

Here are some of their favorite memories and observations about this unique travel experience.

Travel and wine appreciation have much in common, says Peter Marks,

“Learning about wine has some amazing similarities to learning about new places,” says the industry veteran, who has a Master of Wine designation, a UK-issued certification, considered one of the highest standards of professional knowledge. When people first visit a new site they might be taken by the beauty but as they tour, they learn its history and significance, gaining a much deeper understanding.

Related: Why You Need Luxury Cruise Travel Agents -- and How to Find a Good One

Likewise, for wine. Passengers might like a specific varietal, but with Marks’ help they gain a deeper comprehension.

The former executive with Constellation Brands, which owns Robert Mondavi, served on a Wine Host on four AmaWaterways river cruises.

He says he enjoys introducing passengers to wine regions. “You can explain the history, why they planted grapes there, and their winemaking techniques. When you go, you see the lightbulb go off, and they get why the wine tastes the way it does. It’s kind of heart-warming to see.”

But not all of his memories are wine related. One of the highlights of his travels had nothing to do with gastronomy. On his first river cruise, a Seine River experience from Paris, it’s Normandy that still sticks with him. Like his fellow passengers, he took the line’s free daylong excursion to the beaches where Allied soldiers landed during D-Day, and was moved by the dignity and sacrifice on display at the military cemeteries.

“I’ll never forget that day. It was breathtaking.”

For Ryan Levy, a wine cruise lets him take his guests on a literal and figurative journey.

It starts with a lecture the first day on board, but that just sets the stage. “Very quickly, they’re out in the vineyard and at wineries. It makes the experience so much more enjoyable because they know what to look for, and they know what to ask at the various wineries.”

And then the experience continues back on ship. “They get to eat the cuisine of the region, and drink the wines. It’s the perfect package.”

Levy, who will next host a Douro River cruise in Portugal, enjoys every moment. For example, he still talks about his Danube cruise when he introduced passengers to Blaufränkisch, an Austrian grape unfamiliar to most Americans.

“I converted a good three-quarters of the ship into being fans, and they had never heard of it. I did a blind tasting, and I made them guess what they were tasting. They thought it was a super high-end French burgundy and then I revealed the bottle. It’s a gorgeous, gorgeous wine.”

Levy, who trained as a chef at Le Cordon Bleu in Paris and runs a Houston-based-winery using organically grown grapes from California, Texas, Washington and Argentina. He takes particular pride in the winemaker’s dinner, presented toward the end of the cruise. He collaborates with the ship’s staff to plan a meal that pairs perfectly with the bottles from his winery.

“I’ve worked with some amazing chefs that really get it. They understand wine flavors and aromas and parings. We really get to show off for the guests on that very special night.”

Along with the wine, the dinners and the scenery, Sally Schweiger remembers the apple brandy.

Related: Drinking on the Douro: What to Sip on Your Portugal River Cruise

She and her husband Fred were leading a wine tour along the Seine River in northwest France, and joined passengers on a shore excursion to the small town of Honfleur. Afterwards they wandered into a shop specializing in Calvados, a distilled apple spirit from the region.

When the owner learned his customers were winemakers, he offered samples of 10-year-old and 20-year-old bottles. “It was a special, special moment,” she says. They ended up bringing back samples to their staff as gifts.

And of course, there was the wine. On the same Seine tour, she and her husband gave a lecture, leading passengers through the world of Sauvignon Blanc. Not only did they taste examples from France’s Loire Valley, but also from New Zealand and, of course, from their own winery.

“People come with us to learn,” she said. And to make memories.

On the last night of every sailing, she and her husband have made it a habit to thank customers for coming. “We go around and make sure everyone has had good time and it’s like a tearful goodbye,” she said. Just a few weeks ago, someone who had been on their Rhine River tour stopped by their winery unexpectedly, bringing back a flood of memories for Schweiger. “They pulled out their phone, and said: ‘Remember?' It was a picture from that final evening."

Before Rob Griffin started his AmaWaterways cruise on the Danube River, he gave passengers an assignment. “There were a couple different wine bars in town that had vast selections of Hungarian wine by the glass. So I sent out addresses and a homework assignment. I told them to taste ten.”

It was a great introduction to a wine region unknown to many Americans.

Related: Taking a Provence Wine Tour from Cruise Ports in the South of France

A trip highlight was visiting winemakers in Austria, he said. “One was in a small castle still inhabited by the count whose family owned the place,” he recalls. “That was very moving. It was a real honest-to-God human connection. This had been in the family since the 1500s.”

For Griffin, it was also fascinating to sail on the Rhine River. One of his most vivid memories is visiting the German city of Rudesheim, a Riesling winemaking center.

“Riesling is a big deal for us in Washington. I’ve been dealing with it for 40 years,” he said. But he loved being able to bring passengers to a small vineyard, staffed by young, passionate employees. “My part in that situation was to keep my mouth shut and listen to what they said.”

Cruising France’s Rhone River as a Wine Host was an adventure for Bradley Brown—and for passengers. “We’d go out and hunt down the cult wines that are hard to get. The beautiful thing is that we could bring those wines back on the ship like it was our own apartment. We’d hang out and we’d grab a couple bottles and do some tasting.”

Although the winery owner loved teaching travelers about the region’s vineyards and history, he said that’s not the only reason to go. There’s also the touring and the comfort of the ship. “If you were going just solely for wine, you’d be missing the point of doing one of these cruises. You get on the boat and you settle in and you’re able to cover a lot of ground. The meals and food are excellent.”

During port stops, he might lead a hike or vineyard visit. At one stop, he joined an outing to an olive oil maker, a trip of particular interest since he makes that too.

Brown, who will next host a Danube cruise, savored the unscripted moments, like being able to grab a bike and pedal along the Rhone, or to grab a chair on the Sun Deck to watch the ship floated by vineyards.

Finally, there are the intangibles that make a wine trip so appealing, he said. Connections form over a week of traveling, tasting and learning together. “There’s an intimacy on the ship. There was really amazing camaraderie and friendships that can develop when you have a common thread of wine that pulls people together. Some people made friends for life.”

Travel writer Larry Bleiberg is an eight-time Lowell Thomas Travel Journalism Award winner and was honored for editing the best newspaper travel section in North America. He writes a column for USA Today and has contributed to the Los Angeles Times, BBC, Better Homes & Gardens, Delta Sky and many others.

Don't miss our other stories about the how a river cruise on AmaWaterways can transform you! Follow these links.

Related: Cruise with Us to Alaska